The Life and Times of Winston Churchill 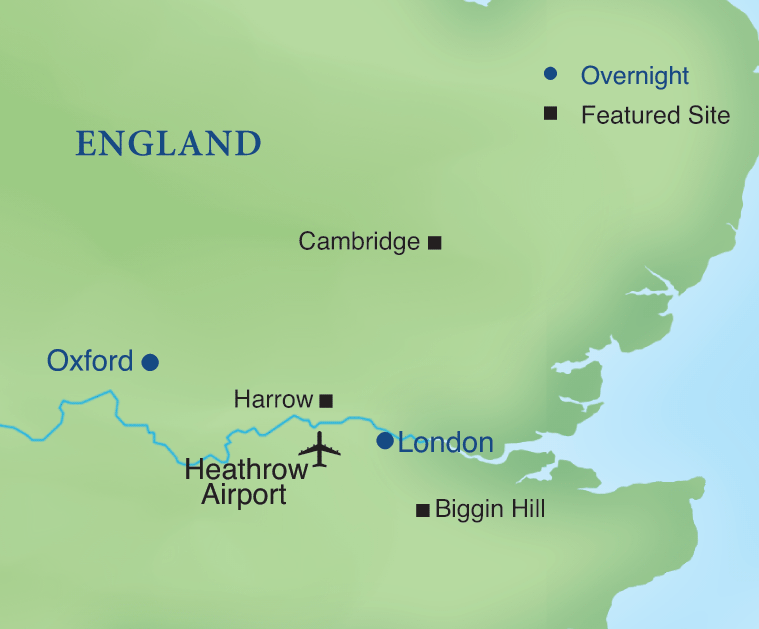 Over seventy-five years ago, World War II shook the foundations of the world. Winston Churchill stepped onto the world stage as a voice of courage and statesmanship when he served as Prime Minister of the U.K. from 1940 to 1945 during this age of uncertainty. On this new specialty tour, featuring stays in London and Oxford, delve into Churchill’s role as a war leader as well as peacetime politician, and gain insight into his early foundations and personal life.

Depart the U.S. for London on independent flights. Upon arrival, transfer to the Chesterfield Mayfair, your hotel in London. This afternoon gather as a group to see Churchill’s Cabinet War Rooms. It is from this underground “safe place,” still pristinely preserved, that Churchill and his intelligence forces conducted the war during the London Blitz. Continue to dinner as a group at a nearby restaurant. (R, D)

Depart this morning for Cambridge, home of Churchill College. Churchill College is the official British memorial to Churchill and it houses the Churchill Archives Centre. Spend the morning exploring the Churchill Papers Archives. The archives hold everything from Churchill’s wartime speeches and letters to Stalin to a priceless collection of more than one million documents written by or belonging to the former British Prime Minister. Enjoy lunch at leisure among the charm and ambiance of historic Cambridge.

En route back to London, visit the Royal Air Force Museum and explore its collection. On display are the ‘Fighter Four’ — four planes, including a Spitfire and Falcon, that participated in the Battle of Britain. Your evening is at leisure. (B)

Depart this morning for Chartwell, Winston Churchill’s country house. Here, the rooms are decorated exactly as they were in his lifetime, with personal belongings reflecting his interests and career. Stroll the terraced garden and enjoy the lakes created by Churchill, the water garden where he fed the fish, and learn the story of the renowned brick wall that he built—amid much publicity! In the art studio, admire Churchill’s paintings that depict his favorite pastime.

This afternoon, visit the Biggin Hill Heritage Hangar, formerly the RAF Biggin Hill Station, which was responsible for protecting the southeast of England during the Battle of Britain and guarding approaches to the capital. Meet with a guide and tour the World War II-era planes being restored while hearing about the plans put in place by Churchill that helped protect London. (B)

Begin your day with a guided visit to the Houses of Parliament. Following lunch, visit Harrow on the Hill, the public school Churchill attended from 1888 to 1892. Take a guided tour to include the speech room where Churchill addressed the boys during World War II. This afternoon, travel to Oxford and check in to the Randolph Hotel, an Oxford institution. Dinner is at leisure. (B, L)

Spend the day exploring Blenheim Palace in Oxfordshire. The family seat of the Churchills, it was designed for the first Duke of Marlborough by architect Sir John Vanbrugh in the early 18th century and is considered one of England’s great treasure houses. Enjoy a private welcome, along with coffee and pastries, in one of the drawing rooms. See where Winston Churchill was born and visit a newly reinvigorated permanent Churchill exhibition and a trail taking you to some of Churchill’s most cherished places on the estate. Before returning to Oxford, pay your respects at Churchill’s grave in nearby Bladon. Toast the trip during your farewell reception before heading to dinner as a group in a local restaurant. (B, R, D)

This morning, transfer from Oxford to London Heathrow for individual flights home. (B)