A One-Week Stay in Poland 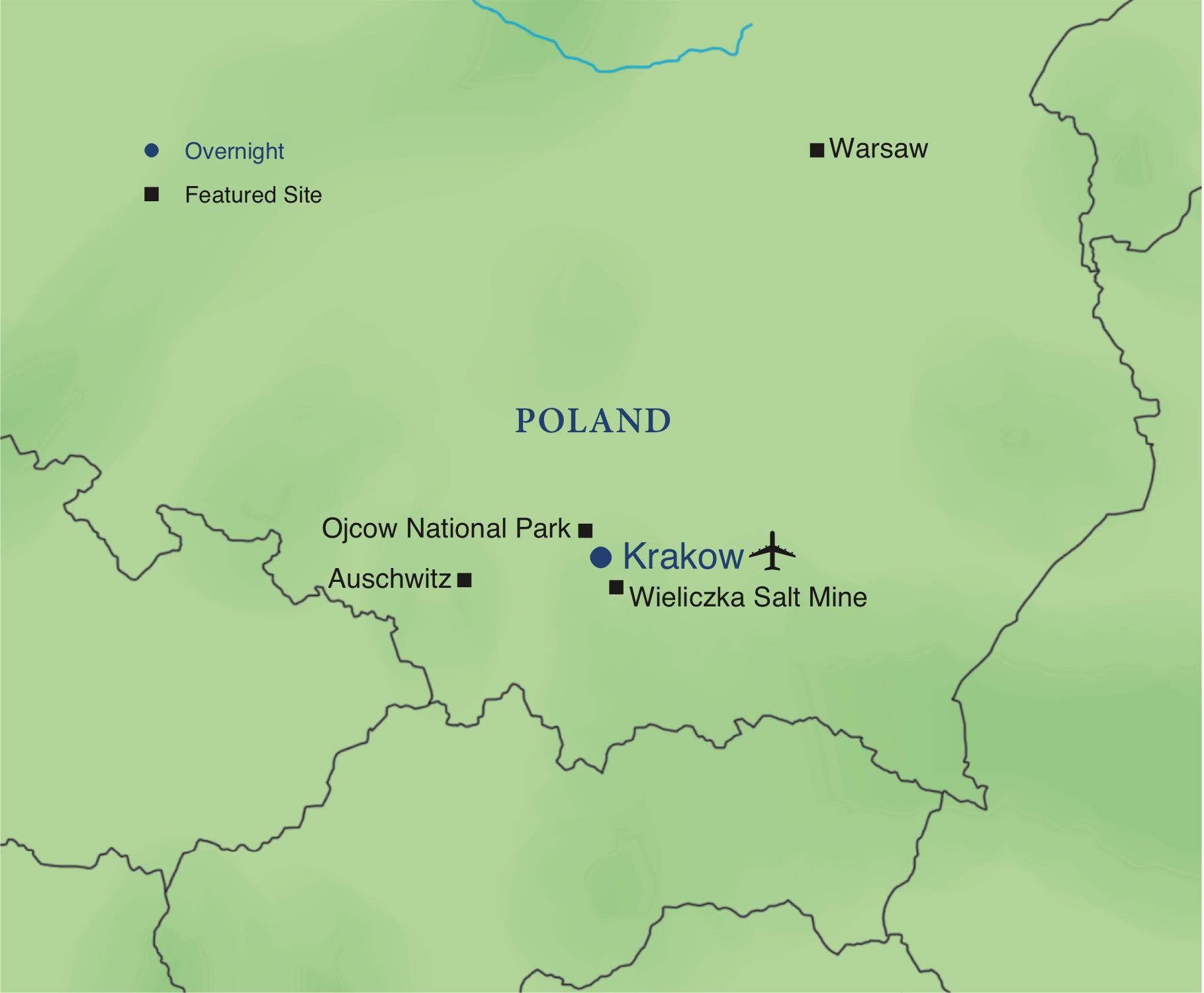 Expectations: Week-long Cultural Stay featuring one city and region—and one hotel. Full-day excursions outside the city with some longer, extensive walking tours of villages, museums, and outdoor historic sites. Excursions can be over uneven terrain (e.g. outdoor sites, cobblestones, city hills, stairs without handrails, absence of elevators); some longer walks to get to city centers where coaches are prohibited. Hotel centrally located for easy access to sites and restaurants during time at leisure.

Depart the U.S. on your overnight transatlantic flight to Krakó​w, Poland.

Arrive at John Paul II International Airport and transfer to the centrally located Hotel Unicus Palace. Upon arrival receive a Welcome Package with maps and general information about the city.

There’s time to unpack and relax before joining an orientation walk of the neighborhood surrounding the hotel. This evening gather for a welcome reception and dinner at the hotel. (R,D)

A full American-style breakfast is included each morning at the hotel.

Gather for a presentation with a local expert on Historic Kraków. This delightful city was the royal capital of Poland for more than five centuries. Learn about its turbulent past and present-day role as a living museum of historic architecture.

Afterward, begin exploring the city at Wawel Hill with a visit to explore the castle courtyard and the Royal Cathedral. The historic center of the city is brimming with things to see including the Market Square, the Gothic Basilica of the Virgin Mary with its famous wooden altar, and the 16th-century Renaissance Cloth Hall, the world’s oldest shopping mall. Continue to Collegium Maius, the most venerable college of Jagiellonian University. Enjoy a lunch of local specialties in Kraków's Old Town.

The balance of the day is free to explore independently or return to the hotel to relax. This evening join fellow travelers in the Smithsonian Journeys Travelers Corner for informal conversation. (B,L)

Depart for the Wieliczka Salt Mine, a World Heritage site of sparkling salt carvings and fascinating underground lakes. Wieliczka is Europe’s oldest salt mine and was established over 700 years ago. You’ll see over a mile of chambers and galleries that sit 442 feet below ground. The Chapel of St. Kinga is the most remarkable with altars, chandeliers, and sculptures carved entirely of rock salt.

This evening join your fellow travelers for a traditional Polish dinner and folkloric performance at Miod i Wino restaurant. (B,D)

Depart the hotel and drive out of the city to picturesque Ojcow National Park. See numerous impressive rock formations including the famous Hercules’ Club. Some limestone rocks exceed 164 feet in height. Next, a guide will escort you through the 14th-century Pieskowa Skala Castle, often referred to as the “Pearl of the Polish Renaissance”, that overlooks the forested Pradnik River valley. Lunch is served at the Castle restaurant.

After returning to Kraków,  learn about Poles as citizens of the world. Due to its constantly shifting borders, Poland has become one of the most cosmopolitan countries in Europe. Many of its citizens have greatly influenced the world. Discuss the cultural contributions of Chopin, Copernicus, Walesa, and Wojtyla. Afterwards, join fellow travelers in the Smithsonian Journeys Travelers Corner for an informal discussion of the day’s discoveries.(B,L)

Choice # 1 – Auschwitz: For those who have chosen to visit Auschwitz, the former Nazi concentration camp, the visit begins at the museum with a short documentary film for a glimpse into Poland’s World War II history. Then, a guide will take you through the exhibits at the camp. Continue to Birkenau for a short visit. Lunch is included during the tour. Please note: Those who elect to visit Auschwitz will be required to provide additional information to secure entrance. More details about this visit will be included in your pre-tour documents. Participants who register for this program within 95 days of departure will require special confirmation for this visit.

Choice # 2 - Nowa Huta: Created in a Krakow suburb, Nowa Huta was founded and built at the end of World War II as a location for heavy industry and as a model communist community. It went from being an industrial center to a place of protest against Soviet control. Hear fascinating tales about the struggles faced in the district during the communist era. See examples of Nowa Huta’s characteristic architecture and explore the area on foot. Visit a typical Communist-period apartment and have lunch at an old school Milk Bar canteen.

The evening will be at leisure. (B,L)

This morning head to the train station and travel by rail through the Polish countryside to the capital city of Warsaw. See many of the city’s historical and cultural landmarks like the Chopin Memorial, the Royal Route, the Warsaw Ghetto Memorial, Madame Curie’s House, the Royal Castle, and St. Anna’s Church in Warsaw’s Old Town.

Enjoy time at leisure for independent sightseeing and lunch. Before returning by train to Kraków, visit the Warsaw Uprising Museum, which includes an archive of historical information on the Uprising in 1944 and the recording of the stories and memories of still-living Uprising participants.

Enjoy dinner with fellow travelers at the hotel upon your return to Kraków. (B,D)

Today, explore the district of Kazimierz, Kraków’s artistic quarter, characterized by winding streets and trendy cafes. This is an area that witnessed Krakow’s Holocaust. Visit Wolnica Square, the former Jewish district with its synagogues, and the old meat market. Before World War II, Jewish culture flourished in this neighborhood for centuries. Steven Spielberg filmed scenes for his Oscar award-winning film Schindler’s List here. Continue to the district of Zablocie to visit Oskar Schindler’s Factory-Museum and the remnants of the Wartime Ghetto that has survived. The balance of the day is at leisure so that you can explore independently.

This evening, gather for a special farewell reception and dinner at a popular local restaurant. (B,R,D)

After an early breakfast transfer to  Kraków’s John Paul II International Airport for your return flight to the U.S. (B)