Cruise the full length of Japan’s Seto Inland Sea on an eight-day voyage, visiting shrines, castles, World War II sites, and two of Japan’s most renowned gardens at the height of spring.

Treasures of Japan by Sea

From Kobe to Osaka Aboard the 264-guest Le Soléal

Cruise the full length of Japan’s Seto Inland Sea on an eight-day voyage, visiting shrines, castles, World War II sites, and two of Japan’s most renowned gardens at the height of spring. 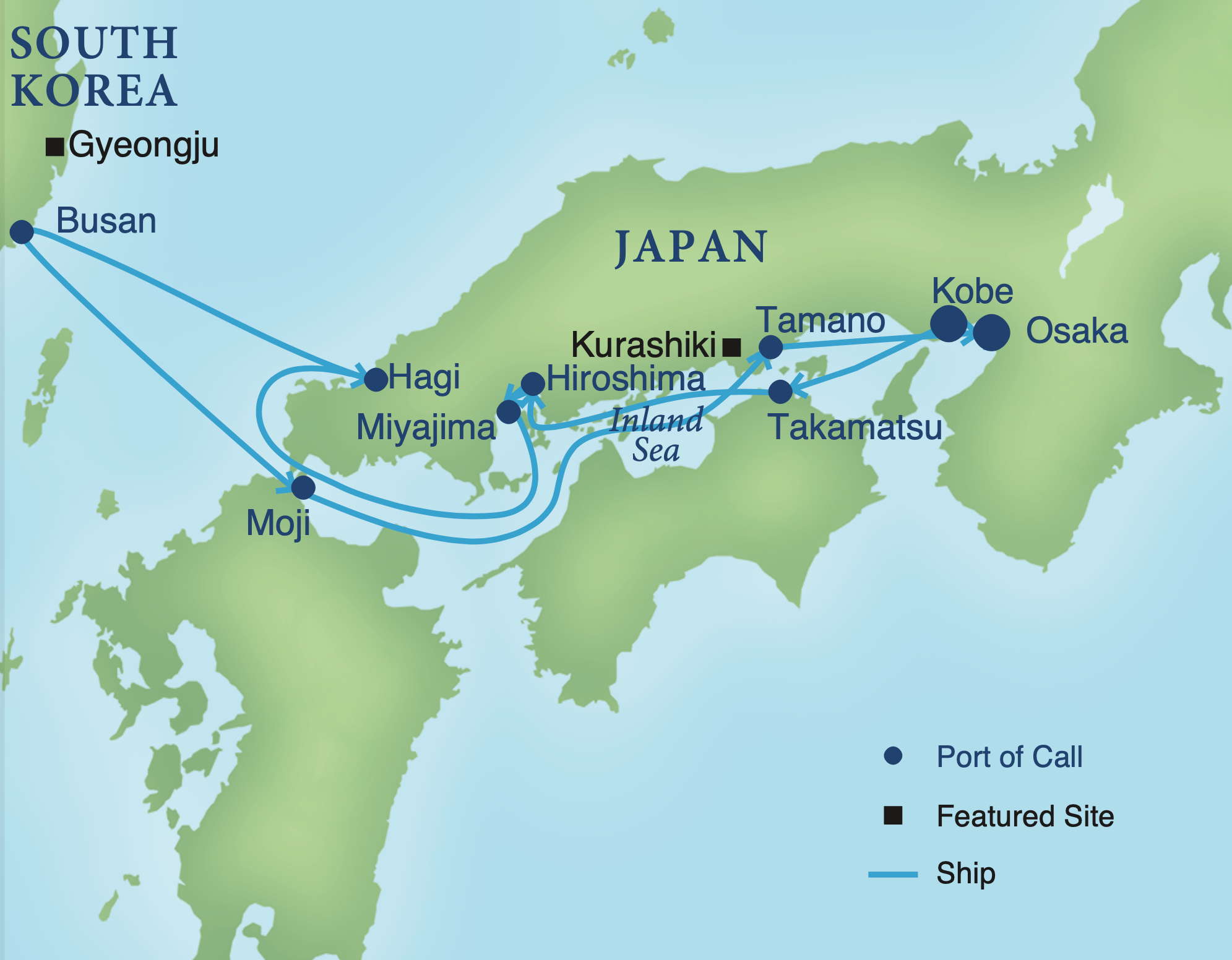 At the height of spring, immerse yourself in the splendors of Japan on a voyage that delves deep into history and cultural heritage. Cruise the full length of the Seto Inland Sea, visiting shrines, castles, World War II sites, and two of Japan’s most renowned gardens. Then cross the Sea of Japan to South Korea for a day among its historic sites. As you make your way from one World Heritage site to the next, you’ll gain insight into Japan’s timeless culture and see firsthand the legacy of the Edo period and the Meiji Restoration.

Arrive in Kobe, and embark the ship late this afternoon. Set sail on the Seto Inland Sea, which separates the islands Honshu and Shikoku. (D)

A vibrant port city on the island of Shikoku, Takamatsu was once the fortified stronghold of the Matsudaira clan. It is home to the Ritsurin, one of the most beautiful classic gardens in Japan. Created by feudal lords at the start of the Edo period, the garden uses the shakkei technique, which draws in the surrounding landscapes. On our morning visit, discover koi ponds, graceful bridges and pavilions, and  ancient trees; and stop for tea while enjoying the views. Then explore the Shikokumura, an open-air museum that includes 27 traditional structures—including a kabuki theater and artisan workshops—recreating life on Shikoku in an earlier era. You’ll have the choice to return to the ship after lunch or continue to the Nakano Udon School for a lesson in making udon, the noodles for which this region is famous. End the day at Bonsai Kandaka Shojuen Garden, examining some of the very best bonsai in Japan. (B,L,D)

Arrive in Hiroshima, a city that embodies resilience and healing. Take a walk through the compelling Peace Memorial Park and see the Genbaku Dome—which survived the force of the atomic bomb. Visit the Peace Memorial Museum and, at the Children’s Peace Monument, learn the moving story of the young survivor who inspired a national movement. Then ascend the Hiroshima Orizuru Tower for sweeping views. Alternatively, head to the Saijo district, the heart of the sake industry since the turn of the 20th century. Take a walking tour of Sakagura-dori, or Sake Brewery Street, and visit two breweries for a tour and tasting. Stop to see Hiroshima Castle before returning to the ship. On Miyajima Island, tour the World Heritage-listed Itsukushima Shrine. The Shinto shrine was originally established in 593, and is guarded by a vermillion torii gate that seems to float on the water at high tide. Enjoy free time on the island this afternoon and watch this stunning shrine light up at sunset. (B,L,D)

Round the southern coast of Honshu and enter the Sea of Japan on our way to Hagi. Once the seat of the powerful Môri clan during Japan's Edo Period, Hagi was active in the Meiji Restoration, which returned the country to imperial rule. Visit the 17th-century Toko-ji temple and see its 500 moss-covered stone lanterns honoring the Môri clan lords. Stop by a Hagiyaki pottery workshop to learn about the city’s signature tea ware. Then take a walking tour of Hagi Castle Town, where original roads and samurai dwellings of have survived intact. Examine everyday ceramics, utensils, and clothing on a visit to the Kikuya Residence, one of the best-preserved examples of merchant-style architecture from the Edo Period. Alternatively, focus on the city’s World Heritage sites, which recognize the role Hagi played in Japan’s rapid 19th-century industrialization. You’ll visit the Reverberatory Furnace and Shoukasonjuku Academy, as well as Hagi Castle Town. (B,L,D)

Cross the Sea of Japan to the South Korean harbor city of Busan. Take a city tour that includes views from Gwangan Grand Bridge, Korea’s longest suspension bridge, and a visit to the Haedong Yonggungsa Temple, set dramatic on cliffs overlooking the sea. Then browse the collection at the Busan Museum of Arts and visit its annex, Space Lee Ufan, dedicated to a local minimalist artist. End the tour at Jagalchi Fish Market, where we’ll get a glimpse into everyday life in Busan. Or choose a full-day excursion to the historic city of Gyeongju, cradle of the Silla Kingdom (57 B.C. to A.D. 935), and its glorious World Heritage-designated Bulguksa Temple. After a traditional Korean lunch, continue to the royal burial mounds at Tumuli Park and venture into the 5th-century Cheonmachong Tomb. Our final stop is the Gyeongju National Museum, which houses a treasure trove of Silla artifacts. (B,L,D)

Our route back to the Sea of Japan takes us through the narrow Kanmon Straits, which separate the islands of Honshu and Kyushu. Perched on this active waterway is picturesque Mojiko, a flourishing center of commerce until 1945 where well-preserved architecture evokes late 19th-century Japan. Choose one of two excursions today. Travel to the samurai stronghold of Chofu, the center of the uprising against Tokugawa rule that led to the Meiji Restoration in 1868. Take a walking tour of this virtual museum of samurai history and culture, visiting the elegant Chofu Mori residence and the Kozan-ji temple, the oldest Zen temple in Japan; then see the beautiful Akama Shrine. Or explore 17th-century Kokura Castle and its authentic teahouse and stylized gardens. On your return, stop in Mojiko Retro, a trendy area of repurposed buildings in the old port. Take in the view from a high-rise designed by one of Japan’s leading architects, and enjoy time to meander through this district on your own. (B,L,D)

Dock in Tamano, and head into the mountains of western Okayama to the Fukiya Furusato Village, the center of production of a precious ore called bengara. The discovery in 1707 of this iron oxide—the primary pigment in the red ochre paint that colors the houses of Fukiya—transformed a once sleepy copper-mining village into a prosperous town. Stop on the way to tour the grounds of the Hirokane-tei, a stunning Edo-period residence. Visit Fukiya’s Bengara Museum, and the 18th-century Former Katayama Residence. After lunch, enjoy free time to stroll through this red-hued village. Alternatively, spend today in the Kurashiki Bikan Historical Area, where 18th-century storehouses recall the area’s heyday as a commerce hub during the Edo period. Stop in at the Museum of Folk Craft to see an impressive collection of centuries-old household goods that provides an intriguing look into everyday life during the Edo period. Continue to the Ohashi Family House, the 200-year-old home of a wealthy merchant. Following lunch, enjoy an afternoon at Korakuen Garden, considered one of the three great gardens of Japan. (B,L,D)

Disembark in Osaka after an early breakfast and extend your stay or transfer to the airport for your flight home. (B)