Join us for an extraordinary adventure of a lifetime on our popular cruise of southeast Alaska and the Inside Passage, from Vancouver to Juneau.

A Cruise from Vancouver to Juneau Aboard the Le Soléal

Join us for an extraordinary adventure of a lifetime on our popular cruise of southeast Alaska and the Inside Passage, from Vancouver to Juneau.

I have traveled with various groups but this trip has been better than any I've ever been on. On most tours at least one thing goes wrong, but not with Smithsonian. They're total experts and professionals and I can't think of anything that they could have done better. 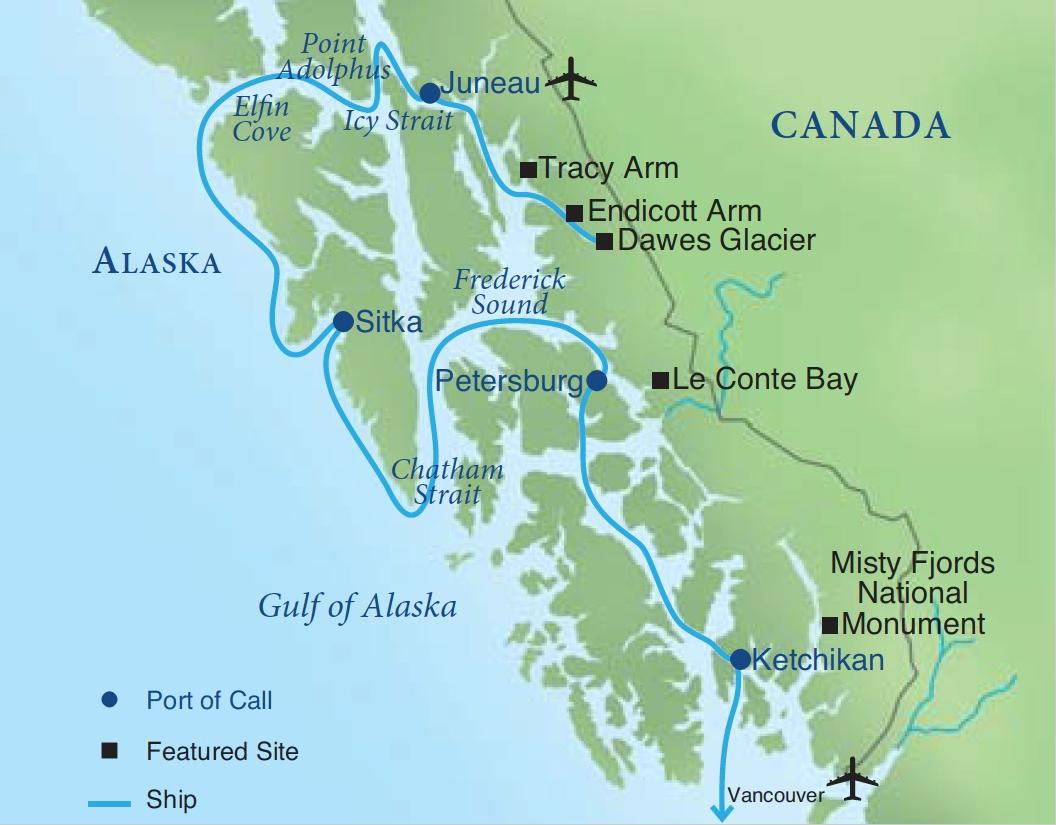 Join us for an adventure of a lifetime as you experience the magnificent natural wonders and mosaic of cultural traditions of Alaska during our popular small-ship cruise featuring southeast Alaska and the Inside Passage.

I have traveled with various groups but this trip has been better than any I've ever been on. On most tours at least one thing goes wrong, but not with Smithsonian. They're total experts and professionals and I can't think of anything that they could have done better.

Day 2 — Cruising the Inside Passage

Enjoy a day at leisure on board as the ship cruises north from the wild Pacific coast of Canada to the storied Alaskan Panhandle.

Experience the natural wonders of the fabled Inside Passage, one of the most scenic waterways in the world, cruising amidst countless islands, lush forests, secluded bays and coves, sandy beaches and lofty waterfalls cascading from mountain cliffs inaccessible to larger ships. Watch for cavorting sea lions and breaching orcas in the deep waters and brown bears, Sitka black-tailed deer, mountain goats, beavers, mink, foxes and river otters roaming the shores and mountainsides.

In the colorful fishing town of Ketchikan the "salmon capital of the world"—stroll the historic boardwalks of Creek Street and watch salmon swimming upstream through the middle of town along the well-known "Salmon Ladder." See the fascinating native art of Potlatch Totem Park, where a master craftsman demonstrates the ancient technique of hand-carving a totem pole.

Weather permitting, enjoy the rare opportunity to cruise the glacier‑sculpted inlets of magnificent Misty Fjords, a seldom‑visited American national and natural treasure harboring some of the Alaska Panhandle’s most awe‑inspiring scenery and wildlife. Behold the running streams flowing through stands of evergreens that merge into mighty waterfalls plunging down spectacular, 3000-foot-tall, near‑vertical, granite‑faced cliffs. (B,L,D)

Be on the deck while cruising the mouth of LeConte Bay, a safe habitat for harbor seals seeking refuge from predators. Look for mothers and pups sunning themselves on icebergs. This bay is the terminus of LeConte Glacier, North America’s southernmost tidewater glacier that frequently calves icebergs.

Discover the town’s rich heritage as you visit with a resident fisherman and explore the Clausen Memorial Museum, which displays a 127-pound king salmon, the largest ever caught. (B,L,D)

Nestled on the edge of Baranof Island and well known for its stunning beauty, Sitka is laden with the art and history of its aboriginal and Russian past. First settled by the Kiksádi clan of the Tlingit, the “capital of Russian America” flourished as a Russian fur-trading hub until its 1867 transfer to the United States. Marvel at the priceless collection of icons in the onion-domed St. Michael’s Cathedral, the first Russian Orthodox church built in North America.

Visit the impressive Alaska Raptor Center, Alaska’s foremost bald eagle habitat, where more than 100 injured eagles are rehabilitated and released back into the wild each year. (B,L,D)

Your small ship allows you to look for humpback whales feeding in the nutrient‑rich waters surrounding Point Adolphus. Cruise through Icy Strait, around which flow unspoiled tidal waters teeming with marine life. From aboard a Zodiac, watch for hunting sea lions and swooping bald eagles, along with other predators, drawn by the abundance of salmon and other prey. Cruise to pristine Chichagof Island, where you will tender ashore to visit remote Elfin Cove. Walk the boardwalks of this tiny fishing community (year-round population: 20), surrounded by the majestic conifers of the Tongass National Forest. (B,L,D)

Cruise into the deep and narrow fjord of Tracy Arm, where waterfalls cascade from dramatic cliffs, lush forest fades to spectacular sheer rock and icebergs glint in the sunlight. At the remote end of Tracy Arm, approach South Sawyer Glacier and watch and listen as it calves chunks of ice that become floating platforms for harbor seals. While in the pristine, seldom-visited Endicott Arm, venture to the arctic-blue toes of the majestic tidewater Dawes Glacier and look for Arctic terns, pigeon guillemots, and even mountain goats.

Disembark in picturesque Juneau, the sole American state capital accessible only by air or sea and where The Call of the Wild author Jack London set forth to join the Klondike Gold Rush in 1897.

Continue on the Denali, Fairbanks and Anchorage Post-Cruise Option or transfer to the airport for your return flight home. (B)