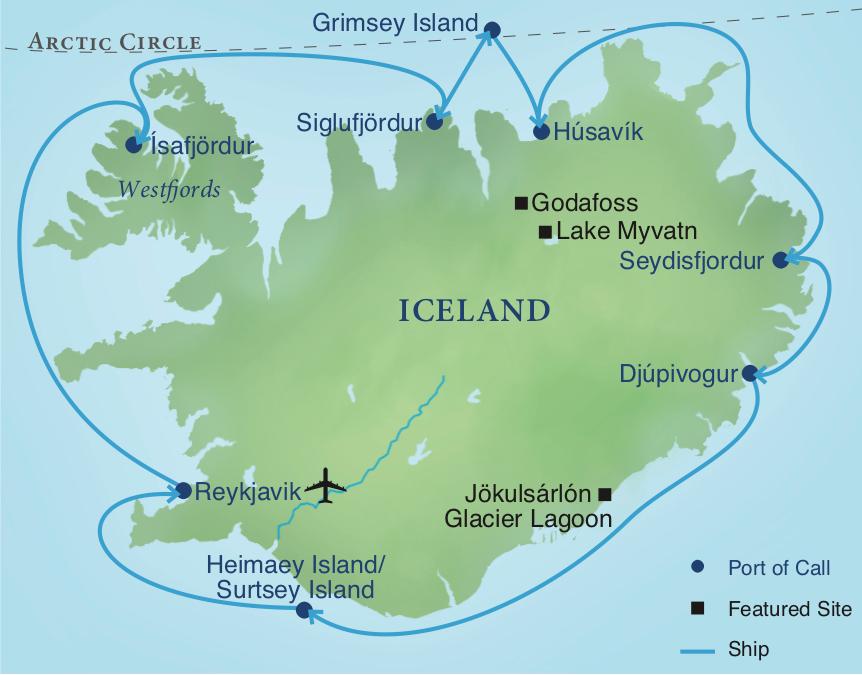 Once remote and difficult to visit, Iceland has emerged as a top travel destination due to its breathtaking landscapes and geologic formations, myriad bird life, and friendly hospitality. This unique cruise, which circumnavigates the island, offers an exceptional opportunity to experience Iceland, unlike most visitors who travel by land. You’ll go off the beaten path to places of immense beauty and interest by boat, as the Vikings did when they first arrived.

Depart from the U.S. or Canada.

This morning, arrive in Reykjavík, the world’s northernmost capital, inhabited by one‑half of the country’s total population of 300,000. See the idyllic recreational sports area of Laugardalur, or Hot Spring Valley, where geothermal water keeps an Olympic-sized swimming pool open year round. Tour the National Museum for a comprehensive overview of Iceland’s history, culture, and heritage. It exhibits nearly 3000 objects and artifacts dating from the A.D. 874 settlement to present day. Visit the iconic Hallgrímskirkja, a towering Lutheran church and the tallest building in Iceland. Pass by the colorful, picturesque houses of central Reykjavík before boarding. (B,D)

Enjoy the morning cruise to the awe-inspiring Westfjords. On charming Vigur Island—home to one single farming family and thousands of puffins, Arctic terns, black guillemots and eider ducks—where time seems to stand still, see the birds in their natural habitat and Iceland’s only windmill, built in 1840. Visit the country’s smallest post office and enjoy coffee and cake served by our island hosts in their well-preserved, 19th-century home.

This afternoon, cruise up the dominant fjord of this distinct and remote 14-million-year-old region, Ísafjörður Djup (“deep”), defined by ruggedly stunning mountains. Tour Ísafjörður’s Westfjords Heritage Museum to learn more about the vibrant coastal art and culture and fascinating maritime history of this remote outpost. Attend the Captain’s welcome reception this evening. (B,L,R,D)

This afternoon, cruise to Grímsey Island, bisected by the Arctic Circle and the northernmost inhabited territory in Iceland. Visit quaint Grímsey Church, built out of driftwood in 1867. Officially cross the Arctic Circle, the top of the world, where the island is treeless but lush with grasses and mosses. Despite its remote Arctic latitude, its weather is mild year round. You will see thriving populations of seabirds, especially auks. Their black and white coloring is similar to a penguin’s, but auks have the distinct ability to fly above and dive into the Arctic waters. (B,L,D)

Explore northern Iceland’s unique and extraordinary landscapes, stopping at Námaskarð, an unearthly, steaming field of boiling, sulfurous mud pots, and the distinctive pseudo craters at Skútustaðir, formed when hot lava flowed over the wetlands 2,300 years ago. Walk among the surreal, almost eerie lava formations of Dimmuborgir, the mythic source of Icelandic folklore, and drive along the shores of cerulean Lake Mývatn, a birdwatcher’s paradise and a haven for many rare migratory birds and 14 species of Iceland’s bountiful wild ducks. Look for the sleek harlequin duck and the black-and-white Barrow’s goldeneye, a remarkable bird species that nests nowhere else. Continue to Goðafoss, “Waterfall of the Gods.” According to legend, this spectacular waterfall earned its name when an Icelandic chieftain threw wooden statues of his Norse gods into its crashing waters, signifying his conversion to Christianity. (B,L,D)

In Seydisfjordur, tour the local church where you will hear about traditional Icelandic dress, the history of the church, and also listen to old Icelandic songs, all from sad songs to fun songs about love. Then, walk to the Technical Museum for refreshments and local specialties during a performance of live music. At the museum, the staff will walk around to educate guests about the museum as well as refill drinks and food and chat with guests. (B,L,D)

Enjoy a full-day scenic excursion along Iceland’s stunning east coast from Djúpivogur to Jökulsárlón glacier lagoon. Board a small boat for a private cruise amongst the breathtaking icebergs of this spectacular lagoon and actually touch the ice that has calved off the outlet glacier, Breidamerkurjökull. On clear days, look for the awe-inspiring Vatnajökull Ice Cap, Europe’s largest glacier. (B,L,D)

Arrive at fascinating Heimaey Island, part of the Vestmannaeyjar archipelago, where the tall cliffs are inhabited by puffin, fulmar, and guillemot bird species. Tour the fascinating Eldheimar Museum, which chronicles the fateful volcanic activity of 1973 that created Mount Eldfell. Then, see the incredible formation, also known as “Fire Mountain,” and its lava fields which are still warm to the touch even 40 years after its last eruption. Stop at the precipitous headland of Stórhöfði to observe Heimaey’s largest puffin colony and see ruins of ancient Viking farmhouses dating from A.D. 650.

This evening, cruise along the coast of Surtsey Island, a World Heritage site. Created during volcanic activity between 1963 and 1967, it is the youngest island on Earth and one of the most fragile; scientists are carefully monitoring the evolution of its flora and fauna.

Disembark the ship in Reykjavik and transfer to the airport for your return flight to the U.S. or Canada. (B)