Round-trip from Reykjavík Aboard the 184-guest Le Bellot 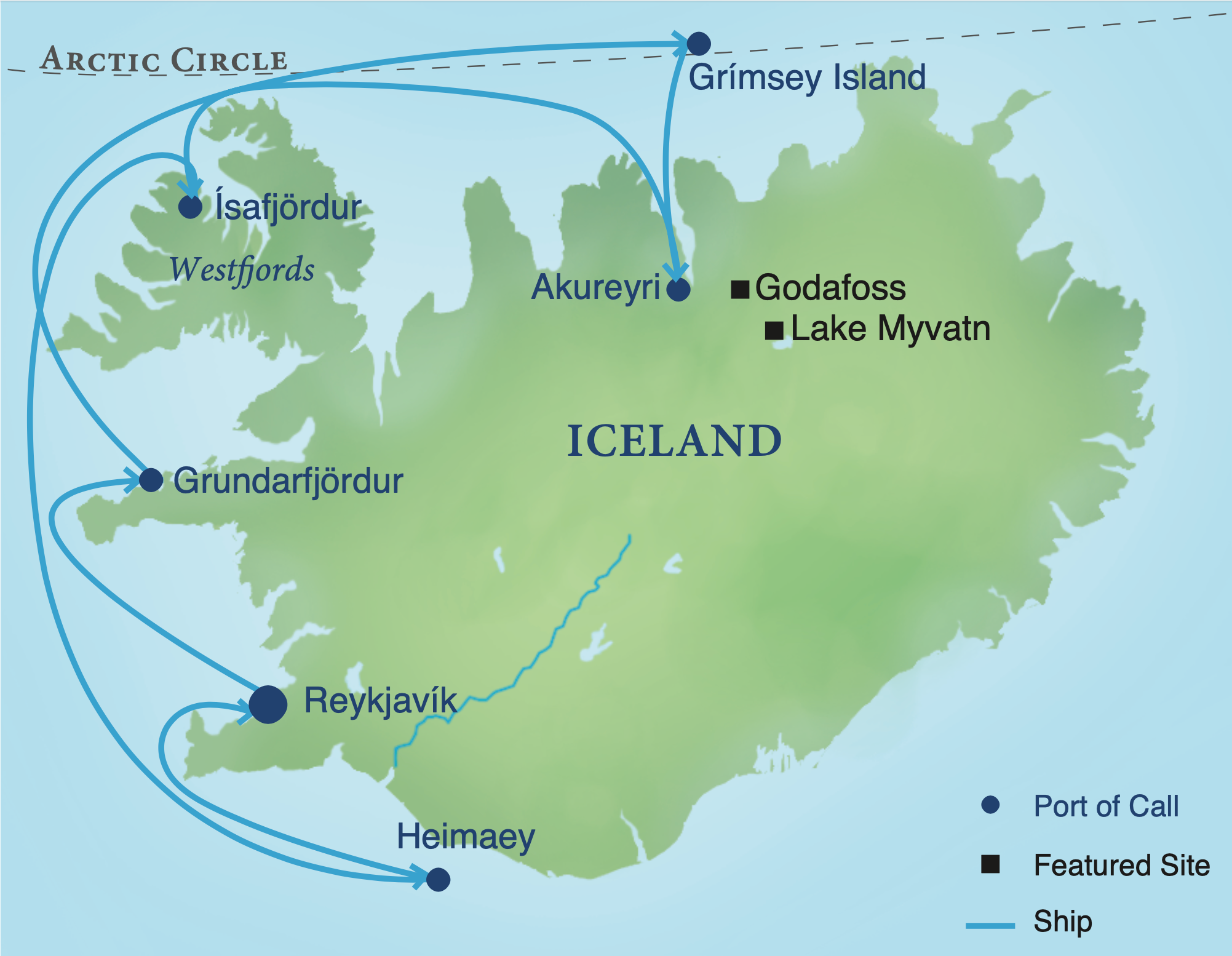 Unique cruise that explores the west coast of Iceland. Ocean-going ship requires using smaller boat conveyances to get to shore for excursions, although the ship may also pull into a pier for embarkation and disembarkation. Excursions will be at an active pace and you could spend some full days off the ship; some days require early morning departures (8:00 or 8:30 am.). Fully scheduled days are balanced by time at leisure in some ports. Some standing and walking for long periods of time (up to two hours or more) during outdoor activities and tours, city tours, and museum visits. Our guides will find you a place to sit if necessary (although this may not always be feasible). Walking two to three miles will be over sometimes uneven terrain, such as walking trails at geological sites, muddy trails, and cobblestones in towns.

Arrive in Reykjavík, the world’s northernmost capital, inhabited by one half the country’s total population of 350,000. Board the ship late this afternoon and cruise north towards the Snaefellsnes Peninsula tonight. Take advantage of the summertime midnight sun to enjoy the scenery as we sail. (D)

The tiny village of Grundarfjördur is located at the foot of the Kirkjufell on the Snaefellsnes Peninsula. Arriving by boat means you’ll get a closer view of this cone-shaped lava-stone rock, which stands like a sentinel at the entrance to the bay. Spend the day discovering the many natural wonders of the peninsula, from the black-pebble beach of Djupalonssandur to the mystical glacier Snaefellnesjökull, made famous by French writer Jules Verne in his 1864 novel, A Journey to the Center of the Earth. Pass the cliffs of Londrangaron the way to the fishing village of Arnarstapi, where we’ll take a walk to view splendid multicolor lava formations and abundant birdlife. Visit Budir, set among black lava fields at the edge of a long beach, before crossing the peninsula back to Grundarfjordur. Alternatively (2023 departure only), enjoy a whale watching excursion in search of orcas, humpback, minke, sperm, and pilot whales.(B,L,D)

Grímsey is Iceland’s northernmost inhabited island, bisected by the Arctic Circle. From its only village, Grímseyjarhreppur, set out to explore its emerald hills, lushly carpeted with moss and grass. Despite its Arctic latitude, the weather on Grímsey is mild year round. You will see thriving populations of seabirds, especially auks. Their black and white coloring is similar to a penguin’s, but auks have the ability to fly above and dive into the Arctic waters. With luck, we’ll see puffins that come to nest on the island’s basalt cliffs from April to August. (B,L,D)

Dock in Akureyri, Iceland’s second-largest town, and travel across the country’s extraordinary northern landscapes to Lake Myvatn. Here, experience some of the area’s fascinating geological phenomena, including the geothermal field of Namaskard, full of bubbling mud pots, steam vents, boiling springs, and fumaroles. Walk among the surreal lava formations of Dimmuborgir, the mythic source of Icelandic folklore, and drive along the shores of cerulean Lake Mývatn, a haven for many rare migratory birds and 14 species of duck. Look for the sleek harlequin duck and the black-and-white Barrow’s goldeneye, a remarkable species that nests nowhere else. After lunch in Skútustaðir, explore the town’s distinctive pseudo-craters formed when hot lava flowed over the wetlands 2,300 years ago. On the way back to Akureyri, stop at Godafoss, the “waterfall of the gods.” According to legend, this spectacular waterfall earned its name when an Icelandic chieftain threw wooden statues of Norse gods into its crashing waters, signifying his conversion to Christianity. Alternatively (2023 departure only), choose to relax in the thermal baths at Húsavík. (B,L,D)

Awaken in the stunning Westfjords region, a rugged peninsula that juts out of Iceland’s northwest coast. Drive along the coast to the tiny town of Bolungarvik, perched on a picturesque bay and bathed by the Isafjardardjup, the largest fjord on the Westfjords Peninsula. Visit the Osvor Fisherman's Hut, a cluster of old turf-and-stone fishing shacks restored in 1988. Here, examine everyday items that tell the story of the hardy community that eked out an existence catching and salting fish in this remote place. At the town’s Hólskirkja ("church on the hill"), see two grand bells meant to drive away the demons that live on the heath. Listen to traditional Icelandic folk songs performed by a local group of singers. On your return to Isafjördur, admire the 18th-century buildings of the old town, then tour the excellent Isafjördur Maritime Museum, a historic monument in itself, and enjoy a tasting of local specialties. Alternatively (2023 departure only), visit the abandoned village of Hesteyri, a 19th-century whaling community located along some of the most rugged landscape in the country. (B,L,D)

Sail to Iceland’s southern coast, arriving at Heimaey, the largest of the Westman Islands, at midday. Heimaey serves as a summer home to millions of seabirds—puffins, fulmars, guillemots, and others—whose eggs have traditionally been an important source of food for the islanders. Observe many of these birds nesting on the cliffs that surround the harbor. Then set off on your choice of two excursions. On a tour of this rugged outpost, pass through the Herjólfsdalur Valley, dotted with ruins of Viking farmhouses; and look out at the world’s youngest island, the World Heritage site of Surtsey, formed in a volcanic eruption in 1963. Stop at the puffin nesting ground of Stórhöfði and visit the fascinating Eldheimar Museum to see the excavated remains of a house buried in ash by a massive volcanic eruption in 1973.  Alternatively, spend the afternoon at the world's first Beluga Whale Sanctuary, established by the Sea Life Trust. Ride a boat to a private bay to observe the two resident whales, see local marine life in the center’s aquarium, and learn about the work of the sanctuary’s Puffin Rescue Center. (B,L,D)

Return to Reykjavík this morning and set out to see the sites of the famous Golden Circle, a trio of scenic wonders. Begin at the World Heritage site of Thingvellir National Park, a lava plain where the world’s oldest legislative body first convened in AD 930. Next, marvel at the “golden waterfall" of  Gullfoss, where the river Hvita drops 96 feet in two stunning cascades. Continue to Geysir, a steaming geothermal area that gave rise to the word “geyser.” Strokkur, the most active geyser here, spouts water and steam high into the air every few minutes. After lunch, make a stop in Hveragerdi, where geothermal energy has been used to power an extensive greenhouse industry. End your excursion admiring sweeping views of the city from the viewing deck of the glass-domed Pearl. Alternatively (2023 departure only), go whale watching in search of humpback, minke and sei whales. (B,L,D)

After breakfast, disembark and transfer to the airport for your flight home. (B)