Join us for a new way to experience Croatia as you lace up your hiking boots to explore fascinating World Heritage sites and other places that aren't on the standard travel itinerary!

Hiking & History Along the Croatian Coast

Join us for a new way to experience Croatia as you lace up your hiking boots to explore fascinating World Heritage sites and other places that aren't on the standard travel itinerary! 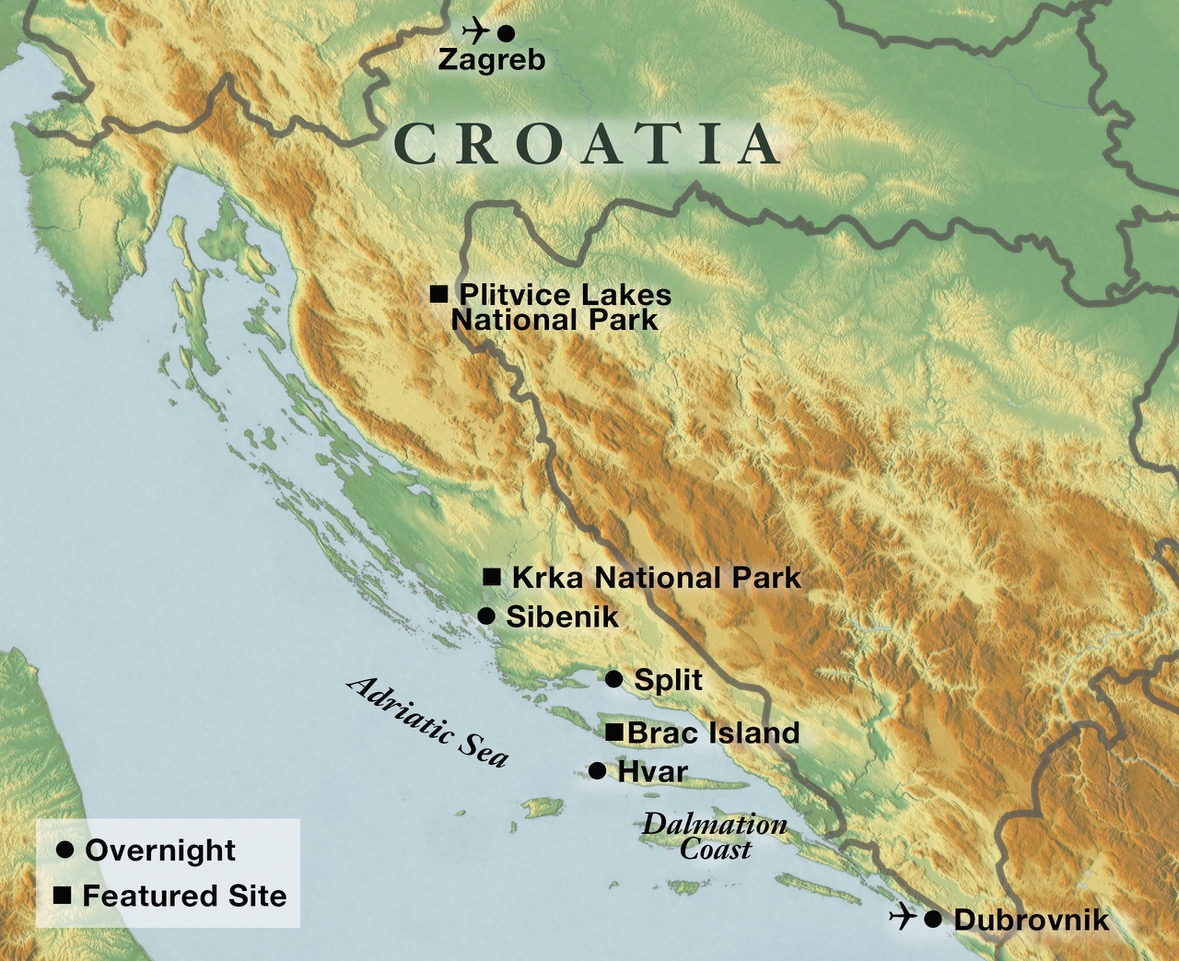 Lace up your hiking boots and join us for a new way to experience Croatia! Step back in time as you explore the pristine coastline, replete with magnificent Roman palaces and medieval Old Towns that still reflect an elegant Venetian ambiance. Hike around travertine pools in magical national parks and go kayaking along the coast of Hvar. Throughout your journey, learn about the region's history, culture, and cuisine. (Level 3/Daily hikes of 2 to 5  hours, kayaking 4 hours)

Depart the U.S. on your international flight to Croatia.

Day 2 – Arrive in Zagreb, Croatia and Explore the Tale of Two Towns

Arrive in Zagreb in the late afternoon to meet your guide in the lobby of the hotel for a brief meeting. We’ll stretch our legs with a city walking tour of the historic old town to learn about the developments behind its two original and rival settlements: Kaptol and Gradec.

After lunch, explore the bustling Trg Bana Jelačić Square, dating from the 17th century and wander around the produce stalls of the Dolac Market. This evening, discover why Croatia is an emerging gourmet destination with a welcome dinner. (D)

Today we depart the capital in the morning to drive to our first stop along the Adriatic Sea. Along the way, we’ll stop to hike in Plitvice Lakes National Park, famous for its brilliant iridescent waters that change from emerald green to turquoise to sea blue. After lunch, we’ll continue on to the World Heritage designated fortress city of Sibenik and catch our first sighting of the Adriatic. Stroll on cobblestone streets lined with white stone houses and orange shingled roofs to the Cathedral of St. James and Fortress St. Nicholas – two architectural marvels along the Dalmatian coast. Settle into your hotel rooms after a filling coastal dinner. (B,L,D) Hiking 3 miles, 2 hours.

Day 4 – The Roman Ruins of Split

Rise this morning to hike in Krka National Park, filled with the remains of Roman fortresses and cascading waterfalls. Our hike takes us along the banks of the Krka National Park, passing by 17th-century watermills to the pool of the Skradinski Buk. After lunch, a scenic drive takes us to the busy port city of Split. We’ll take a tour of the Roman-era palace of Diocletian, built in the fourth century for the Emperor. More of a fortress than a palace, this World Heritage designated complex is a marble-lined labyrinth that was once an imperial residence and housed the military before becoming the heart of modern-day Split. (B,L) Hiking 3 miles, 2 hours.

Day 5 – Explore the Island of Brač

This morning we’ll take a short ferry over to Brač Island, famous for its white-sand beaches. Built into the coastline, we’ll visit the Blaca hermitage, a former cave turned monastery that served as a place of solitude for monks for over 400 years. Today includes a steady climb to the top of Vidova Gora, the highest peak on the Dalmatian Islands. Hike through pine forests and over white stone rocks to reach the 2,552-foot peak for scenic overlooks of the Adriatic and Zlatni Rat beach. Wind down the evening with a stop to tour a fishing village in Bol and a local olive oil tasting before heading to dinner. (B,L,D) Hiking 7-8 miles, 3-5 hours.

Hop over to tour Hvar Island today to hike among hillsides filled with olive trees, vineyards, and lavender fields.  Enjoy a private, organic lunch in the open-air gallery of a local artist’s estate. Following lunch, enjoy a relaxing wine tasting in the small harbor town of Jelsa. The rest of day will be spent hiking on old trails along the coast of Hvar through stone villages, forests, and inlets. (B,L) Hiking 6 miles, 3-4 hours.

After a week of hiking around Croatia, we'll change pace and sea-kayak through the tranquil waters of the protected, tranquil waters of the Pakleni Islands, a chain of islands off the coast of Hvar. Perfect for beginners, your guide will outfit you in your kayak and provide a full orientation before taking to the water in our stable boats.

Afterward, take a historical walking tour of the enchanting old town in Hvar. Walk along cobblestone streets surrounded by 13th-century fortress walls to St. Stephen's, a Venetian cathedral commissioned to marry Baroque and Renaissance architectural styles. Throughout the day, the Fortica fortress has been looming overhead and we’ll conclude the day with a walk up to the 16th-century fort for unforgettable panoramic, sunset views of the city and the islands. (B,L,D) Kayaking 5 miles for 4 hours and walking, 3 hours.

Day 8 – Breach the Walls of Dubrovnik

This morning, we’ll relax on the Adriatic Sea as a catamaran takes us from Hvar to Dubrovnik. Fortified during the 12th century, we’ll get our first glance of the formidable surrounding city walls from the waters below.

After lunch, we’ll begin a walking tour on the twisting limestone streets of Dubrovnik’s old town. Jutting out onto the Adriatic Sea, the old town was used for centuries as a trading port and today has been declared a World Heritage site. Take in the city’s preservation efforts with historical tours of the Dubrovnik Cathedral, Franciscan Monastery, and the Lovrijenac Fort, all dating back to before the 12th century. Enjoy the views walking along Dubrovnik’s ancient walls before gathering this evening for a farewell dinner in town. (B,L,D) Walking 5 miles, 3-4 hours.

This morning, transfer to the Dubrovnik airport for your flight home.

A Literary Hike Through the Cotswolds