H. Rafael Chacón is Bruce and Suzanne Crocker Director of the Montana Museum of Art and Culture and Professor of Art History and Criticism at the University of Montana-Missoula where he lectures on a broad range of art historical subjects. He received his Ph.D. in art history with honors from the University of Chicago, having been awarded numerous research fellowships to study in Europe, including an award from the Spanish Ministry of Culture for his dissertation on Michelangelism in renaissance art. He has twice walked the Camino de Santiago, the ancient pilgrimage route across France and Spain. Rafael has been an expert for many Smithsonian Journeys programs in Cuba, Europe, and Russia. A generalist historian, he has written on a range of topics primarily related to renaissance and baroque art, both in Europe and in the Americas, most recently focusing on revival style architecture in the U.S. during the late 19th century. He has taught Islamic art at the college level for over 30 years, focusing on the rich interactions between the Christian, Jewish, and Muslim worlds since the middle ages. 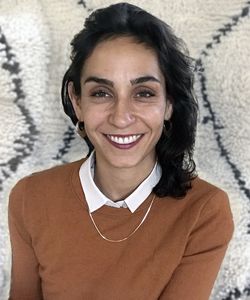 Alia Kate is the owner of Kantara, a fair-trade design business that specializes in Moroccan rugs. Since 2008, Alia has worked directly with weaving cooperatives in Morocco and is committed to fostering economic development of the women artisans through ethical trade. Through Kantara, Alia has presented at numerous conferences, developed an arts/education curriculum, and curated rugs and content for exhibits in museums and galleries.

Alia has cultivated a career that revolves around social innovation, community development, and experiential education. Some of her past experience includes managing the Henry R. Kravis Prize in Nonprofit Leadership at Claremont McKenna College, launching the Social Innovation Program at Sequoyah High School, and designing and leading educational service-learning trips in Costa Rica, Nicaragua, Ecuador, Puerto Rico, the American South, Navajo Nation, and, of course, Morocco. In each of these capacities, Alia has engaged thought leaders in different sectors throughout Los Angeles and the global changemaker community.

Alia has lived and worked in half a dozen countries throughout the world. As a result, she’s fluent in French, Spanish, and Arabic. Since cross-cultural communication is at the core of what she does, she’s also learned some of the Amazigh languages that are spoken in rural Morocco.

After a decade of leading educational tours for teens and college students, she’s thrilled to join the Smithsonian on their tours. Alia is in the process of completing her executive MBA and  is a graduate of Oberlin College where she studied international Relations with a focus on the Middle East and North Africa.