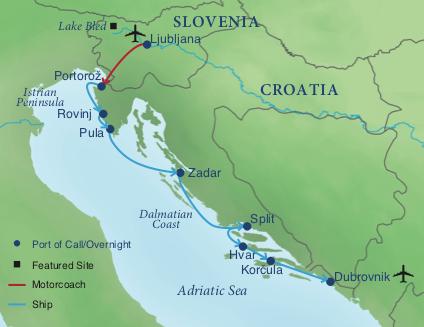 Expectations: This tour will begin in Slovenia with full-day excursions that require getting on to and off of motor coaches several times and standing and walking for extended periods of time. Walks will often be over more challenging terrain including archeological sites, cobblestone streets, pathways and city hills. There will be stairs and some will not have handrails and there will be limited or no access to elevators. Participants will be required to walk to city centers in areas motor coaches are prohibited. During the coastal cruise the ship will pull up to a pier for disembarkation via a gangway. In certain ports, it is possible that the ship may need to dock side by side with other vessels, in which case participants will be escorted through neighboring ship(s) to go ashore. Morning and afternoon excursions off ship  will include walks at archeological sites and on cobblestone streets, walkways and city hills. Stairs may not have handrails and there will be limited or no access to elevators. Some guided walks will depart directly from the pier and others will require a motor coach to reach the site. The ship does not have an elevator.   Appropriate for: Travelers who are physically fit, can climb stairs and steeper paths and are very comfortable with longer days of touring (both walking tours and coach time). ​

Depart home on an overnight flight. Upon arrival in Ljubljana, transfer to hotel, which is located within the historic center of the city. Gather this evening for a welcome reception and dinner. (R,D)

After a morning lecture, set out on a walking tour of the historic city center, where Baroque, Renaissance, and Art Nouveau buildings populate one of Europe’s greenest capitals. Visit the sprawling Central Market in the historic center, which is off-limits to automobiles. You’ll also see the famous Dragon Bridge and explore the ancient Roman wall.

After an included lunch, travel to the lovely and impossibly blue Lake Bled and ride gondola-like Pletna boats to visit Slovenia’s only island, a picturesque outpost in the center of the lake. Enjoy dinner independently before returning to Ljubljana. (B,L)

Drive south and explore the Skocjan karst caves, a World Heritage site. One of the largest known underground canyons in the world, the caves are a vast network of tunnels and chambers sometimes referred to as the “underground Grand Canyon.” Continue to the Lipica Stud Farm, in operation for over 400 years. Explore the interactive Lipikum Museum to learn about the rich history of the stud farm and the Lipizzaner horses, which are born dark then progresses slowly to bright white over a lifetime.

Continue to the historic Venetian stronghold of Piran and enjoy dinner near the oceanfront promenade. (B,L,D)

Cross the border into Croatia, stopping in the medieval city of Motovun, perched on a hilltop on the Istrian Peninsula. Venetians fortified this town with two sets of thick walls in the 14th century.

Continue to the fishing port of Rovinj for a walking tour of the old town with its cobbled streets and piazzas. Embark the Queen Eleganza this evening in time for a welcome reception and dinner. (B,L,R,D)

Cruise to Veliki Brijuni Island, once an exclusive summer resort and now part of the Brijuni National Park, known for dinosaur footprints and home to a 1st-century Roman villa. Drink in the beauty of the island on an optional bicycling excursion. Continue to Pula for a walking tour highlighting Roman ruins, including the impressive Colosseum, the only Roman amphitheater in the world with a complete circle wall. (B,L,D)

Spend the day sailing the scenic coastline and enjoying the educational program en route to Zadar, the oldest continuously inhabited Croatian city. Enjoy an afternoon walking tour of the impressive but less-crowded city of Zadar, which boasts a rich history that dates as far back as the Neolithic Era. The streets of the old town are paved with shining white marble, and the inviting waterfront is a magnet for art lovers. Spend the evening at leisure exploring Roman ruins, Venetian architecture, and street-side cafes.

Independent dining options are available near the waterfront for dinner ashore this evening. (B,L)

Explore Plitvice Lakes National Park, a series of 16 lakes interconnected by waterfalls and pedestrian bridges, and a World Heritage site. Continue to Split, Croatia’s fashionable, second-largest city. Enjoy time to explore the old town and have dinner at leisure.

The ship remains in port overnight, with dinner on your own in Split. (B,L)

Visit Roman Emperor Diocletian’s Palace, an ancient fortress-like complex that dominates the Split waterfront. Then cruise to the island of Hvar, a beautiful walled city known for its fields of fragrant lavender. Stroll along the elegant main square, with views of St. Stephen’s Cathedral, distinguished by its tall, rectangular bell tower, and the 15th-century Franciscan Monastery, whose refectory contains a 1524 edition of Ptolemy’s Atlas. Explore the yacht-filled waterfront and enjoy an evening at leisure in the restaurant-lined avenues. (B,L)

Cruise to the fortified town of​ Korčula, perched on a promontory on its namesake island. Korčula is the sixth-largest island in the Adriatic Sea, rich in vineyards and olive groves, picturesque villages, a glorious old town, and age-old religious ceremonies, folk music, and dance traditions. Take a walking tour through the old town area, and sample some of Croatia’s famous wines and local specialties, including the white wine made from pošip grapes that grow primarily on Korčula.

Cruise to Dubrovnik this afternoon. (B,L,D)

Noted for its expansive walls and red tile rooftops, Dubrovnik is perhaps the most-visited destination on the Adriatic coast. This morning explore the sites along the city’s main street, the marble-clad Stradun, including Onofrio’s Fountain, St. Blaise’s Church, and the Rector’s Palace. Also visit the Franciscan Church and Monastery, a large complex belonging to the Order of the Friars Minor and consisting of a monastery, church, library, and pharmacy, the latter of which dates from A.D. 1317.

Enjoy free time in the afternoon to explore the maze of alleyways and Renaissance-era architecture, then return to the ship for a festive farewell dinner. (B,D)

Disembark this morning for return flights home. (B)