Set sail from Venice’s fabled waterways to explore the legacy of the Greeks, Romans, Venetians, and more on an 8-day cruise along Croatia’s island-studded Dalmatian Coast to the Ionian Sea.

From Venice to Athens Aboard the 184-guest Le Jacques Cartier

Set sail from Venice’s fabled waterways to explore the legacy of the Greeks, Romans, Venetians, and more on an 8-day cruise along Croatia’s island-studded Dalmatian Coast to the Ionian Sea.

No Single Supplement: Limited availability and subject to change. 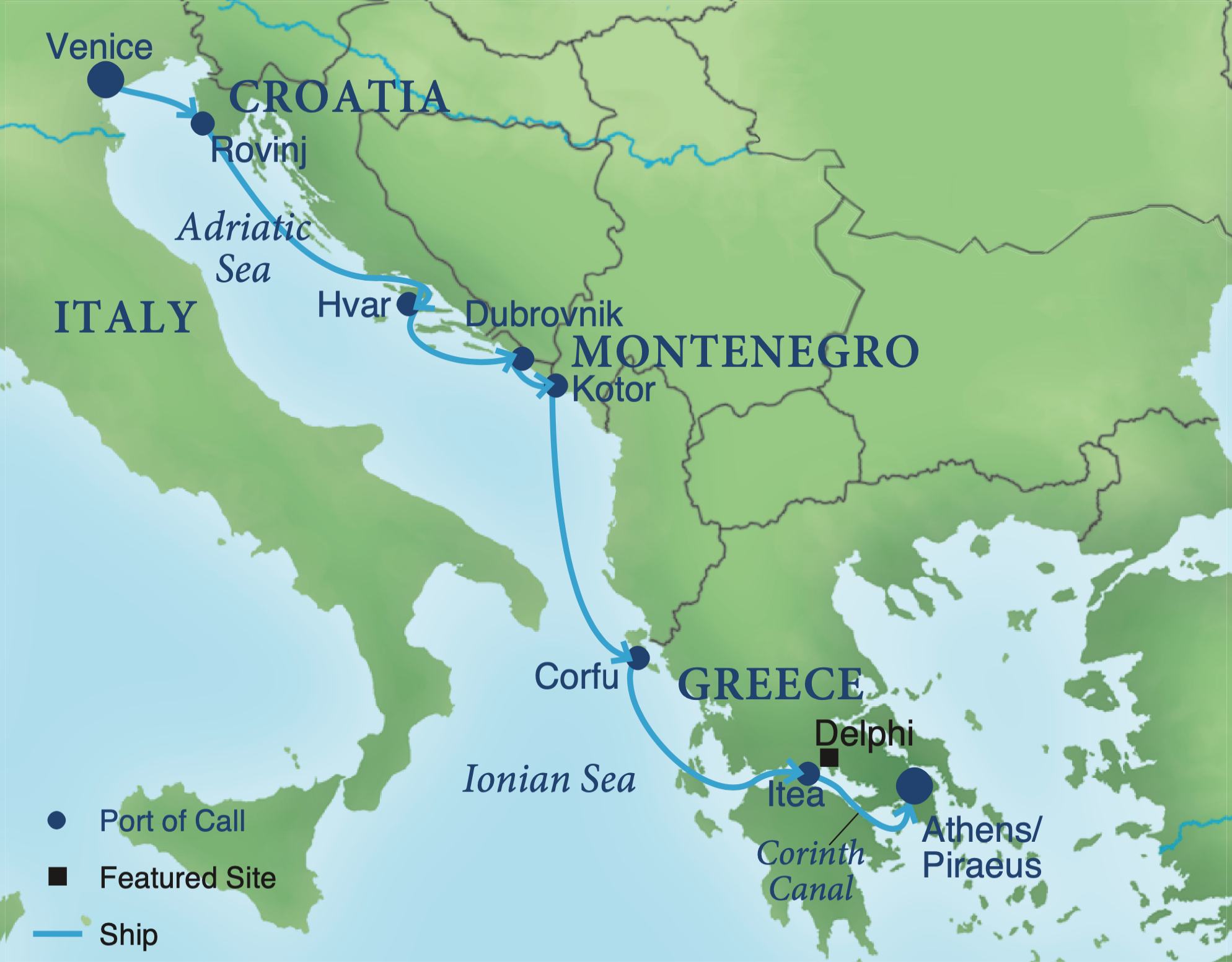 Set sail from Venice’s fabled waterways on an eight-day cruise along Croatia’s island-studded coast to the Ionian Sea. Encounter six World Heritage sites in four countries as you explore the legacy of Greeks, Romans, Venetians, and Byzantines from Croatia’s stunning Istria and Hvar to Dubrovnik and Montenegro’s Gulf of Kotor. In Greece, experience magical Corfu and its intriguing history, and visit Delphi or St. Lucas Monastery before passing through the dramatic Corinth Canal on your way to Athens.

Arrive in legendary Venice, built on the edge of a lagoon in the 5th century. Together the city and its lagoon—which played a major role in the power and defenses of the Venetian Empire—make up a World Heritage site. Embark the ship this afternoon and set sail on the lagoon in the early evening. (D)

Our first port of call is Rovinj, set on the shores of Croatia’s Istria Peninsula. The seat of the Venetian government in Istria from the 14th to the 18th century, Rovinj still displays the influence of the Venetian Empire in its history and architecture. On a guided walking tour of the town’s historic center, built on a rocky island that is now connected to the mainland, venture down narrow streets intersected by covered passageways and arcades. Visit the baroque Basilica of Saint Euphemia and the Batana Eco-Museum, named for the batana boat, Rovinj's emblematic flat-bottom fishing vessel.  The award-winning museum celebrates local fishing traditions and the cultural heritage of the coastal communities. (B,L,D)

Since the 4th century B.C., Greeks, Romans, Byzantines, and Venetians have all left their mark on the island of Hvar. Known for its fields of rosemary, lavender, and laurel, this fertile island has produced olives and wine since the ancient Greeks. Discover Hvar on your choice of two excursions today. Step into history on a walking tour of Hvar Town with a visit to the handsome Renaissance Franciscan Monastery and its museum, the Cathedral of St. Stephan and its four-story bell tower, and the Venetian Loggia. At the Benedictine Cloister, learn about Hvar lace, crafted by local nuns out the fibers of dried agave leaves, and see their handiwork at a small museum. Your final stop is the 17th-century Arsenal, which houses Europe's oldest Municipal Theater, established in 1612 and still in use today.  Alternatively, head into the island’s interior on a scenic drive to the village of Velo Grablje, set among lavender fields. Meet a local grower to learn about the importance of lavender to Hvar's economy and way of life. Then follow a medieval trail on an easy hike to Milna, and spend some time on the beach this afternoon. (B,L,D)

Magnificently positioned on a rocky spur on the Adriatic coast, the walled city of Dubrovnik is one of the best-preserved medieval cities in Europe—despite having suffered a devastating earthquake in 1667 and the ravages of many wars. Your walking tour begins on the Stradum, a wide pedestrian way lined with shops and cafés and a remarkable number of historic buildings. Venture into the exquisite cloister of the Franciscan Monastery and see the oldest pharmacy in Europe, founded in 1317 and still offering traditional salves today. Continue to the Cathedral of the Assumption, a treasure trove of reliquaries and artwork, including an altarpiece by Titian. Stroll past important cultural monuments, from Sponza Palace to the Onofrio Fountain, fed by a 15th-century aqueduct that carries potable water from a spring seven miles away. End the tour at the Gothic-Renaissance Rector's Palace, now a museum that tells the story of Dubrovnik’s days as the capital of the Republic of Ragusa, a maritime power that rivaled Venice in the late Middle Ages. (B,L,D)

Montenegro is one of the newest nations in the world, having gained its independence in 2006. The spectacular Bay of Kotor, deeply carved into the Montenegrin mountains, leads to the charming medieval town of Kotor, a World Heritage site known for the incredible Venetian and baroque architecture of its fortified Old Town. On a walking tour, admire 14th-century frescoes at the Romanesque Cathedral of Saint Tryphon, and explore the town’s seafaring and naval traditions at the Maritime Museum.  Then visit the Lapidarium, a collection of stone sculpture, monuments, and architectural embellishments dating from Roman times to the 18th century that were rescued from the debris of earthquakes and wars. (B,L,D)

Awaken off the Ionian Island of Corfu, Homer’s “beautiful and rich land,” prized for its natural splendor and resources and for its strategic position at the entrance to the Adriatic Sea. Here, the empires that have ruled the island are reflected in French-style boulevards, Georgian mansions, and Venetian and Greek monuments. Take a short drive to the village of Gastouri to visit the Achilleion Palace. Built in 1889 by Empress Elisabeth of Austria, the palace served as the headquarters of the German occupation during both World Wars. Follow the coast to Perama to take in views of picturesque “Mouse Island" before continuing to the Old Town. On a walking tour, stroll the Esplanade and the main square, and meander through narrow streets lined with Venetian forts, loggias, palaces, and churches. Pass the residence of the British High Commissioner, the historic Cambiello Quarter, and the town hall on your way to the Church of St. Spyridon, patron saint of Corfu. Enjoy free time in Corfu before boarding the ship. (B,L,D)

Dock in Itea, a small port tucked away in the Gulf of Corinth on mainland Greece. From here, set out on your chosen excursion to the World Heritage sites of Delphi or St. Lucas Monastery. Delphi was considered the center of the Greek world in the 6th century B.C., when Greeks of all classes flocked to this sacred ground to consult the high priestess of the Temple of Apollo on matters as routine as farming and as monumental as the declaration of war. Follow the Sacred Way to the Temple of Apollo and see the temple’s marble Altar of the Chians, where both the common and the mighty awaited the oracle’s pronouncements. Visit the Delphi Archaeological Museum, and enjoy free time in the town of Delphi. Or head to the walled St. Lucas Monastery, a spectacular monument of Middle Byzantine architecture and art. Continue to Arachova, on the northern slopes of Mount Parnassos, and get a sense of local life as you explore this quaint village where traditional textiles, wines, and cheeses are produced. This afternoon, you’ll have a once-in-a-lifetime opportunity to cruise through the Corinth Canal, a rare and thrilling highlight. This conduit between the Adriatic and Aegean Seas was first proposed at the end of the 7th century B.C. but not fully realized until 1893. Just 70 feet wide and navigable only by small ships, the impressive waterway cuts dramatically between vertical ochre cliffs through the Isthmus of Corinth. (B,L,D)

Arrive in Greece’s legendary capital city and transfer to the airport for your flight home. (B)