Experience New Zealand as early Polynesians and explorers once did—by exploring its coastlines by ship. Voyage from Auckland to Milford Sound and explore New Zealand’s North and South Islands and breathtaking Fiordland.

A Circumnavigation Cruise of the South Island

Experience New Zealand as early Polynesians and explorers once did—by exploring its coastlines by ship. Voyage from Auckland to Milford Sound and explore New Zealand’s North and South Islands and breathtaking Fiordland.

I have been with various travel groups but this trip was better than any I've ever been on. Everything was well planned; these guys had it to down to a science. On most tours at least one thing goes wrong, but not with Smithsonian. They're total experts and professionals and I can't think of anything that they could have done better. 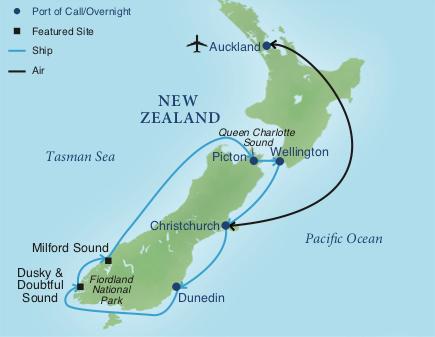 New Zealand is a country of breathtaking natural beauty, astonishing flora and fauna, and towns and villages reflecting distinctive personalities.  Join us to circumnavigate the South Island by ship, just as early Polynesians and explorers did, and explore Auckland as well!

I have been with various travel groups but this trip was better than any I've ever been on. Everything was well planned; these guys had it to down to a science. On most tours at least one thing goes wrong, but not with Smithsonian. They're total experts and professionals and I can't think of anything that they could have done better.

Depart home on an overnight flight to Auckland, the “City of Sails,” on New Zealand’s North Island. Lose one day crossing the International Date Line.

Arrive in the morning at Auckland International Airport and then transfer to the Pullman Auckland Hotel where rooms will be ready for your early morning arrival.  Stop by the Hospitality Desk for any help during your time in Auckland.

Enjoy an afternoon at leisure to get accustomed to New Zealand before joining your fellow travelers this evening for a Welcome Reception.  Dinner this evening is on your own. (B/R)

After breakfast, travel a short distance to the Auckland War Memorial Museum to view its extensive collection of exhibits on the Cultures of New Zealand and the Pacific Islands.  The Collection features the world’s largest assortment of Maori taonga (treasures). Marvel at the special performance of the Museum’s cultural performance group, the Haka Legend. Through their traditional stories, chants, dancing, they provide an insight into Maori mythology, genealogy, and spirituality. The cultural sharing culminates in the celebrated Maori haka dance. (traditional war cry or challenge).

The morning tour continues with a panoramic tour of Auckland situated between two different bodies of water—the Tasman Sea and the Pacific Ocean.  The central part of Auckland showcases a contrast in architectural styles with modern skyscrapers in harmony with restored Victorian buildings and Colonial-style shops.

Your stop at one of the many vantage points provides stunning views of Auckland’s harbor and skyline.

Your afternoon and evening are at leisure. (B)

Visit black-sand Muriwai Beach for spectacular views of the Tasman Sea. See the Muriwai Gannet Colony, one of only three mainland gannet colonies in New Zealand and observe thousands of pairs of gannets tending to and protecting their chicks. Meet friendly, local Kiwi and enjoy light refreshments at a family-run farmstead.

New Zealand is home to over 27 million sheep, a ratio of six sheep for every person. Your introduction to this important agricultural sheep ranching tradition will be enhanced with a specially arranged sheep herding demonstration, highlighting the New Zealand Huntaway sheep dog’s essential role in high country sheep station farming.

Near Matakana in the beautiful Northland, visit the playful open-air gardens and museum of the Sculptureum to see classic works by Cezanne, Chagall, and Rodin along with whimsical, modern-day sculptures. Lunch is included. (B,L)

Fly from Auckland to Christchurch, known as “the most English city outside of England,” named after Christ Church College at Oxford University and the oldest established city in New Zealand. The panoramic tour introduces you to this vibrant city in transition, where the restoration of Victorian architecture recaptures the provincial charm of Britain as a renaissance of new structures emerges along the Avon River.

Visit the New Zealand Heritage site of Mona Vale. See the late-19th-century homestead designed by J.C. Maddison, responsible for the English-inspired architecture in Christchurch. Enjoy a guided tour of the gardens and fernery built to showcase the indigenous silver leaf fern in the 1907 New Zealand International Exhibition. See the prominent Cathedral Square, the heart of Christchurch.

Arrive in Dunedin, noted for its rich Scottish heritage, even having its own tartan. Dunedin is surrounded by dramatic, rolling hills with endless scenic vistas. See the Octagon—the eight-sided town center—and visit the grand, 1906 Flemish Baroque-influenced Dunedin Railway Station, one of the most photographed railway stations in the world. Tour historic 20th-century Olveston, the English Country house in the city and home of the philanthropic Theomin family.

New Zealand’s only castle, Larnach (1871), was designed completely in Scotland and built atop a spectacular hill overlooking Otago Harbor. Enjoy a walk through its period rooms and magnificent, award-winning gardens. (B,L,D)

Enjoy a rare cruise into Dusky Sound, where sheer cliffs plunge into the sea and (un)believably beautiful Doubtful Sound, the deepest of the fiords, where waterfalls cascade down steep, verdant slopes, misting into a sequence of rainbows. Legendary Milford Sound offers majestic scenery worthy of novelist Rudyard Kipling’s appellation, the “Eighth Wonder of the World.”

Enjoy a day cruising the dazzling west coast of the Southern Alps aboard your Five-Star expedition ship, with enriching educational lectures and opportunities to watch for rare species such as wandering albatrosses and Hector’s dolphins, endemic to New Zealand’s waters and identifiable by their distinctive black and white markings and round dorsal fin. (B,L,D)​

Day 11 — Picton for Marlborough and Blenheim

Cruise the beautiful coves and islets of Queen Charlotte Sound, where Captain Cook anchored the HMS Endeavour in 1770. Look for spotted shags perched on rocks and the endangered Hector’s dolphin frolicking nearby. The seaport of Picton serves as the gateway to the Marlborough District, New Zealand’s largest wine region and internationally acclaimed for its sauvignon blanc. Transfer through the fertile Wairau Valley to Blenheim and enjoy a wine tasting and tour; the area has rich alluvial soil, creating a unique terroir ideal for winemaking.

Tour the impressive Omaka Aviation Heritage Centre, home to a collection of authentic and replica World War I and II aircraft—many from the private collection of Sir Peter Jackson, director of the Lord of the Rings trilogy and the recently released documentary, They Shall Not Grow Old. (B,L,D)

Cross the Cook Strait to Wellington, the capital of New Zealand and a historic site for the proud Māori. See the city’s Parliament buildings—including the distinctive “Beehive.” Enjoy spectacular views of Wellington and Cook Strait from the top of Mount Victoria; the South Island is visible on a clear day.

Visit Te Papa Tongarewa, Māori for “container of treasures,” the National Museum of New Zealand showcasing an impressive Māori art collection as well as the special exhibit Gallipoli: The Scale of War, which tells the story of the Gallipoli campaign in WW1 through the eyes and words of eight New Zealanders. Attend the Captain’s Farewell Reception this evening. (B,L,R,D)

After breakfast on board and arrival into Lyttelton, you disembark Le Laperouse and continue on the Southern Alps and The Remarkables Post-Program Option or transfer to the Christchurch airport for your return flight to the US. (B)