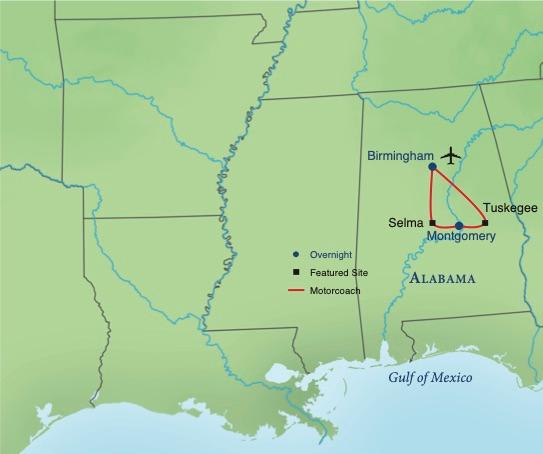 Alabama was home to some of the great turning points of the Civil Rights Movement of the 1950s and 1960s. Here, the movement’s national leadership took shape and people came together to advance the cause of justice. In collaboration with the Alabama African American Civil Rights Heritage Sites Consortium, join us for a unique program that both expands and deepens the historic narrative of this inspiring era and illustrates how the work in contemporary social justice continues today.

Arrive in Birmingham on individual flights. Transfer independently to your newly renovated historic hotel in downtown Birmingham for an afternoon check-in. Gather this evening with fellow travelers for opening remarks and a welcome dinner. (D)

Dr. Martin Luther King, Jr. once described Birmingham as “probably the most thoroughly segregated city in the United States.” With a vantage point overlooking Birmingham at Vulcan Park and Museum, a local expert will explore Birmingham’s industrial past and race relations.

Return downtown to the Birmingham Civil Rights National Monument and visit Kelly Ingram Park, where police commissioner Bull Connor ordered police to use fire hoses and dogs on children and adults who were gathering to march. Across the street is Sixteenth Street Baptist Church, site of the infamous 1963 bombing. Visit the Birmingham Civil Rights Institute, a Smithsonian Affiliate, which presents an in-depth look at the civil rights movement through time, from segregation through today’s international struggle for universal human rights. Ride through the Smithfield neighborhood and the area nicknamed Dynamite Hill because of the number of racist bombings. This is the neighborhood where Angela Davis grew up and Rev. Martin Luther King stayed with civil rights Attorney Arthur Shores. The next stop is Historic Bethel Baptist Church, pastored by Rev. Fred L. Shuttlesworth, whose radical leadership of the Birmingham movement led to bombings of the parsonage and church. Because of the leadership and activism of Rev. Shuttlesworth and the congregation, Bethel Church is included in the National Monument designated by President Barack Obama in 2017. Return to your hotel before dinner at leisure. (B)

Depart for Selma this morning. Brown Chapel AME Church served as headquarters for the Southern Christian Leadership Conference during the 1965 Voting Rights Campaign. It was the starting point for the March 7, 1965 “Bloody Sunday” voting rights march when 600 marchers, led by Representative John R. Lewis, were violently turned back by State Troopers at the Edmund Pettus Bridge. Hear personal insights from a woman who participated as a teenage foot soldier.

A stop at Tabernacle Baptist Church provides us with an opportunity to explore the church’s magnificent Classical Revival architecture and other unique features designed and constructed by David West, an emancipated person. We conclude our visit to Selma with a memorable walk across the Edmund Pettus Bridge. Depart Selma along the Selma-to-Montgomery march route. Along the way, visit the Lowndes Interpretive Center and stop by the modest home owned by the Jackson Family, local voting rights activists, who provided the headquarters where Stokely Carmichael launched the Black Panther Freedom Party. Arrive in Montgomery for check-in and an evening at leisure. (B,L)

Join a curator at the Montgomery Museum of Fine Arts to explore Alabama’s African American collections. Spend time to relax and enjoy the museum’s beautiful site and gardens. Explore historic Centennial Hill, location of the Dexter Avenue/King Parsonage, Dr. Martin Luther King Jr.’s home during the bus boycott. Visit the home of Dr. Richard Harris where John Lewis and other freedom riders found refuge and Dexter Avenue King Memorial Baptist Church, where Dr. King was pastor during the bus boycott. It was at this church that Dr. King had his first public forays into movement leadership through his work as chairman of the Montgomery Improvement Association (MIA), which was formed in December 1955 to coordinate the boycott. (B,D)

This morning, visit the Legacy Museum, which uses interactive media, sculpture, videography and exhibits to examine mass incarceration as the legacy of slavery and segregation. From here visit nearby Court Square, the site of former slave markets, and as such, one of the most significant sites linked to a lack of civil rights in the world. The square is also the place where Rosa Parks boarded the bus that began the Montgomery Bus Boycott. Explore the newly opened National Memorial for Peace and Justice, also known as the national lynching memorial, a sacred space for truth telling and reflection about racial terror in America. Meet with staff from the Equal Justice Initiative (EJI) to discuss their work. Your evening is free for individual pursuits. (B)

Depart Montgomery and travel east to the historic town of Tuskegee, Alabama. Tour the Tuskegee Airmen Historic Site commemorating the contributions of African American aviators of World War II. Learn about the history of Moton Field, the site of primary flight training for the pioneering pilots known as the Tuskegee Airmen. Next, visit the campus of Tuskegee University, founded by Booker T. Washington. End your journey with a farewell lunch at a restored historic mansion. Continue to Birmingham for individual flights home. (B,L)