Go behind the scenes for an insider's look at some of Smithsonian's special treasures during its 175th anniversary—an exclusive tour offered only through Smithsonian Journeys!

Go behind the scenes for an insider's look at some of Smithsonian's special treasures during its 175th anniversary—an exclusive tour offered only through Smithsonian Journeys!

An eye opening look at aspects of the Smithsonian that we forget about—or never knew. The range of the Institution's research is astounding!

We thoroughly enjoyed Celebrate Smithsonian and look forward to joining a Smithsonian Journeys trip in the future. We thought the program, Smithsonian representatives, and fellow participants were all top notch.

This tour was very special because it brought me into the heart of what the [Smithsonian] mission is all about. Much of the history, the purpose, and the philosophy were covered and it made me appreciate the Institution all the more. 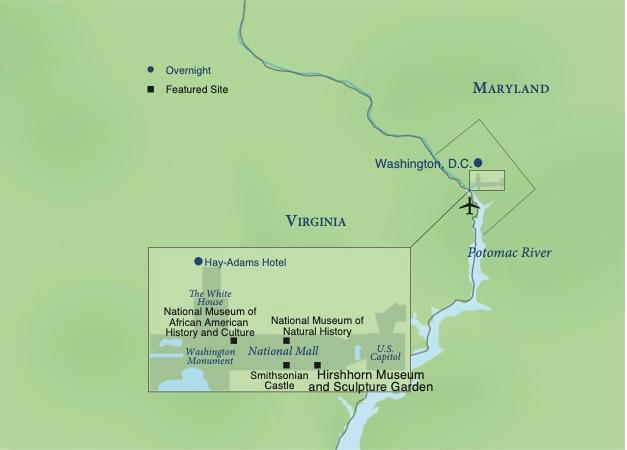 Join us in Washington, D.C. to celebrate Smithsonian’s 175th anniversary at this very special event. Our exclusive program reflects the breadth of the Smithsonian’s collections and research and offers an insider’s look into the world’s largest museum complex. We’ll usher you behind the scenes where you’ll meet top curators and researchers whose knowledge and passion create a uniquely immersive experience.

Please check back here often as we continue to fine-tune the itinerary and add new opportunities, such as a visit to see our new baby panda! Limited to 55 Smithsonian guests.

An eye opening look at aspects of the Smithsonian that we forget about—or never knew. The range of the Institution's research is astounding!

We thoroughly enjoyed Celebrate Smithsonian and look forward to joining a Smithsonian Journeys trip in the future. We thought the program, Smithsonian representatives, and fellow participants were all top notch.

This tour was very special because it brought me into the heart of what the [Smithsonian] mission is all about. Much of the history, the purpose, and the philosophy were covered and it made me appreciate the Institution all the more.

Individual arrivals during the afternoon to Washington, D.C. Check in at The Hay-Adams, located steps from Lafayette Square, the Smithsonian’s Renwick Gallery, and the White House. In the early evening, gather for a festive welcome reception.

Arrive in the stunning David H. Koch Hall of Fossils when the crowds have left and the gallery is quiet. “Deep Time”—the recently renovated 31,000-square-foot fossil hall—invites you to explore the epic story of how Earth’s distant past is connected to the present and informs our future. You’ll learn about ancient ecosystems and witness the evolution of life while getting up close to the remains of a Tyrannosaurus rex, a Woolly Mammoth, and some 700 fossil specimens. Discover how human actions are driving Earth’s rapidly changing climate today much like long-ago geological events did in the past.

Then gather for a presentation by a curator from the Department of Paleobiology about the new hall and collections and enjoy a gala welcome dinner served in the museum’s grand rotunda. (R,D)

Each morning, enjoy a private breakfast served at your leisure in the hotel.

Depart for Smithsonian’s National Museum of African American History and Culture (NMAAHC), which is celebrating its fifth anniversary in 2021.

“This Museum will tell the American story through the lens of African American history and culture. This is America’s Story and this museum is for all Americans.”  Lonnie G. Bunch, III — Founding Director, NMAAHC — ​Secretary of the Smithsonian

The only national museum devoted exclusively to the documentation of African American life, history, and culture, NMAAHC was established by an Act of Congress in 2003 following decades of efforts to promote and highlight the contributions of African Americans. As you approach the museum, marvel at its symbolic corona, inspired by the three-tiered crowns used in Yoruban art from West Africa. The museum features over 85,000 square feet of exhibition space, nearly 3,000 objects, multiple themed exhibitions, and interactives stations and video displays housed over five floors.

Enjoy early entry followed by a special welcome in the museum’s Corona Pavilion, tucked within the sweeping lobby. Begin with a curator-led tour of select highlights in the History Galleries, which include exhibits on the Transatlantic Slave Trade, the Civil War, the Great Migration, Segregation, and Civil Rights. The collection includes iconic objects, such as the surviving elements of the Jones-Hall-Sims House, a two-story log cabin built by formerly enslaved members of the Jones family, and Southern Railway No. 1200, a segregated passenger train car from the Jim Crow era. Time permitting, peruse the Community and Culture Galleries according to your interests; here you’ll find exhibitions celebrating music, style, foodways, artistry, movement, language, and so much more. Finally, gather along one of the museum’s private balconies for a bird’s eye view of the National Mall, Jefferson Memorial, and Washington Monument.

Enjoy a catered luncheon by the museum’s award-wining Sweet Home Café, featuring African American classic dishes that employ “from-scratch” cooking with locally sourced ingredients. During dessert and coffee, a curator will offer a presentation on one of the museum’s exhibitions or collection pieces.

This afternoon, continue to Smithsonian’s Hirshhorn Museum and Sculpture Garden. Since opening in 1974 the Hirshhorn’s holdings have encompassed some of the most important collections of postwar American and European art in the world. Conceived as a large piece of functional sculpture, the building’s eye-popping cylindrical form, hollow center, and elevated construction was built primarily as a gallery for paintings and was designed to look as if floating above nearly four acres of landscaped grounds. The museum features over 197,000 square feet of both indoor and outdoor exhibition space.

Gather for welcome remarks by the museum’s Deputy Director, Jaya Kaveeshwar, then in the company of Associate Curator of Art, Anne Reeve, take a tour of the museum’s famed sculpture garden. With more than thirty works of art displayed year-round, the garden is composed of nearly a fourth of founder Joseph Hirshhorn’s initial gift. Sculptures on view include works by Auguste Rodin such as Walking Man (Bronze; 1900/enlarged 1905, cast 1962) and The Burghers of Calais (Bronze; 1884-1889/cast 1953-1959); Henri Matisse, Back I, II, III & IV (Bronze; 1916-1917/cast 1959-1960); Alexander Calder, 6 Dots Over a Mountain (Steel, Paint, Metal Rods; 1956); Yayoi Kusama, Pumpkin (Fiberglass Reinforced Plastic, 2016); and many more.

Return to the Hay Adams late in the day for time at leisure.

This evening, depart for the Smithsonian Castle. Completed in 1855, the building was designed by famed architect James Renwick, Jr. who won a competition to build the structure. At the time he was known for his Gothic Revival church designs featured mostly in New York. A distinctive red sandstone was quarried from Seneca, Maryland, and used in the construction of the building, which includes nine towers, some with whimsical conical roofs. Originally, the Castle stood on a piece of isolated land cut off from Washington’s downtown by a canal. Over the years the Castle has become the centerpiece of the National Mall as additional museums and government buildings were constructed around it. The Castle originally served as home to the first Secretary of the Smithsonian, Joseph Henry, and up to 1881 housed all aspects of Smithsonian operations, including research and administrative offices, lecture and exhibit halls, a library, laboratory, and living quarters for visiting scientists.

Upon arrival at the Castle, gather for a festive dinner in the Castle Commons, a majestic space that features a soaring vaulted ceiling, neo-gothic details, and exhibition cases showcasing artifacts from many of the Smithsonian’s museums and research centers. Enjoy an after-dinner presentation on Smithsonian history and lore with Dr. Richard Kurin, Smithsonian Distinguished Scholar and Ambassador-at-Large, the first person so designated in the 175-year history of the Institution. As a member of the Smithsonian’s senior leadership team, Dr. Kurin focuses on strategic direction, institutional partnerships, public representation, philanthropic support, and special initiatives. (B,L,D)

In 1993 President Clinton signed legislation establishing an extension to the Smithsonian’s National Air and Space Museum’s flagship location on the National Mall to be constructed at Washington Dulles International Airport in Virginia. This companion facility would be the largest construction project in Smithsonian history and the only Smithsonian museum building erected entirely without federal funds. Opened on December 15, 2003 during the centennial week of the Wright brothers’ first sustained, powered flight at Kitty Hawk, North Carolina, the Steven F. Udvar-Hazy Center features two massive hangars, including the ten-story-high Boeing Aviation Hangar displaying aircraft hanging at several levels and angled as if in flight, with heavier aircraft displayed on the floor, and multi-level walkways, some rising four stories high to provide a variety of perspectives to view them. The James S. McDonnell Space Hangar displays the massive Space Shuttle Discovery, which is surrounded by missiles, rockets, space capsules, satellites, and smaller objects.

Enjoy early entry to the Steven F. Udvar-Hazy Center to view the main collection accompanied by one of the Museum's highly regarded docents.

You’ll also step behind the scenes during a tour of the Mary Baker Engen Restoration Hangar. This spacious facility can accommodate several aircraft at one time, giving restoration specialists an ample area for their work and the specialized equipment required to reconstruct, repair, and preserve artifacts. The restoration hangar also houses numerous support shops where specialized functions are necessary to preserve the collections.

Midday, return to Washington, D.C., and the hotel for a late lunch.

This evening, depart Washington, D.C., and travel south following the Potomac River to George Washington’s iconic estate at Mount Vernon, now a Smithsonian Affiliate Museum. Enjoy an after-hours, candle-lit tour of the mansion, which was first erected in 1734 as a one and one-half story house built by George Washington’s father Augustine Washington. The home later received its well-known name from George’s half-brother Lawrence Washington. George Washington began running Mount Vernon in 1754, and over the next 45 years slowly enlarged the dwelling to create the 21-room residence seen today. Washington oversaw each renovation, advising on design, construction, and decoration, despite being away much of the time and he selected architectural features to express his growing status and ultimately as the leader of a new nation.

Learn more about the on-going and extensive restoration projects not only at the mansion but throughout the estate. Then gather for a festive farewell dinner at the restaurant on the grounds of the estate. (B,L,D)

Enjoy a final breakfast at the hotel followed by individual departures from the hotel. (Check-out is requested by 12:00 p.m.) (B)