A One-Week Stay in Germany

This trip was my retirement present to myself. It exceeded my expectations! It was great that travel details were well-handled, allowing me to focus on the country. I met extraordinary people, was inspired by the sights, and delighted in all I learned. Now, that's the way to kick-start a new life adventure! 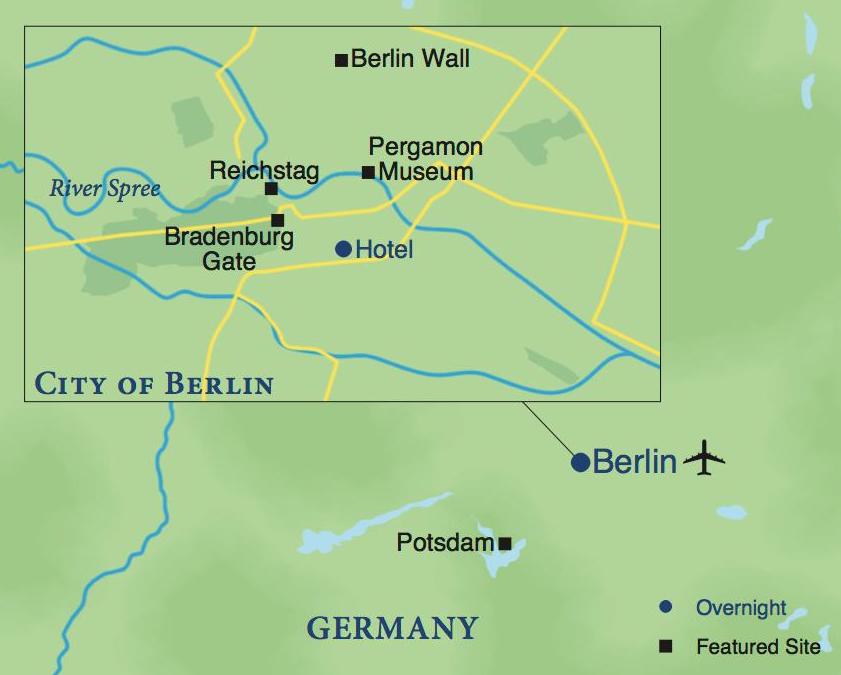 Join us in Berlin and experience this European cultural capital fully transformed since reunification. Masterful contemporary architecture and a strong new visual identity are balanced with carefully preserved art treasures and the best of its cultural legacy, along with iconic sites that reflect its turbulent history. Stay at the Hilton Berlin, ideally located in the Mitte district in the city center on Berlin’s most beautiful square.

This trip was my retirement present to myself. It exceeded my expectations! It was great that travel details were well-handled, allowing me to focus on the country. I met extraordinary people, was inspired by the sights, and delighted in all I learned. Now, that's the way to kick-start a new life adventure!

Depart the U.S. on an overnight transatlantic flight to Berlin, Germany.

Arrive at Berlin’s Tegel International Airport and transfer to the upscale Hilton Berlin close to the city’s historic quarter and situated on the famous Gendarmenmarkt. Upon arrival at the hotel, you’ll receive a Welcome Package with maps and general information about Berlin and its environs. Your Smithsonian Journeys Travel Director will be available this afternoon and throughout the program for suggestions regarding sightseeing, restaurants and independent activities. There’s time to unpack and settle in before joining fellow Smithsonian Journeys Travelers for an orientation walk of the neighborhood surrounding the hotel. The evening begins with a welcome reception and dinner at the hotel. (R,D)

A full American-style buffet breakfast is served at the hotel each morning during your stay.

Gather for a presentation: A Tale of Two Cities: East Berlin and West Berlin. Learn about Berlin’s Cold War past as a city divided into East and West sectors from a local expert.

Set-out on a panoramic motor coach tour of Berlin that includes the iconic Brandenburg Gate, Pariser Platz, the Federal Chancellery, Unter den Linden, a lovely tree-lined boulevard, the Gendarmenmarkt and a drive along the fashionable Kurfurstendamm. Visit the Bernauerstrasse Wall Memorial to see the last remnant of the infamous Berlin Wall with the preserved grounds, barbed wire, and guard tower, it provides a moving impression of how the wall divided the Eastern and Western sectors of this great city until late 1989. Following lunch, the afternoon is at leisure. (B,L)

Depart Berlin on a full-day excursion to historic Potsdam, known for its beautiful landscape of palaces and gardens. Discover Sanssouci, the former summer residence of Frederick the Great, King of Prussia. Admire the rococo architecture, extravagant furnishings, and manicured gardens. See the Neues Palais, a magnificent baroque castle. Then visit Cecilienhof Palace, a Tudor-style palace built in the early 20th century. Truman, Churchill, and Stalin gathered at this beautiful country house in 1945 to discuss the future of post-war Europe. Enjoy lunch at a restaurant in Potsdam. Explore Potsdam’s Dutch Quarter independently, an ensemble of 18th-century houses and buildings designed to bring a touch of the Netherlands to the city. In the early evening, gather in the Smithsonian Journeys Travelers for a discussion of the day’s discoveries. (B,L)

Gather for a presentation by a local expert that highlights Music in Berlin. Depart the hotel for a behind-the-scenes visit to the Staatsoper Unter Den Linden, the Berlin State Opera House. Later, visit the Gemaldegalerie for an escorted tour of one of the world’s finest collections of European art. This evening, gather with fellow travelers for dinner at a local restaurant followed by an evening concert performance at the unique Piano Salon. (B,D)

Gather this morning in the Smithsonian Journeys Travelers Corner for a leisurely overview of the day’s activities. Later, have lunch at a local beer garden restaurant. Afterward, depart for a guided inside tour of the Reichstag including the rooftop terrace. Then, continue to the Hohenschönhausen Memorial, a former Stasi prison, for a guided visit. In 1951, after its founding, the East German Ministry of State Security established this Soviet prison in East Berlin. In the 1950s, upwards of 11,000 people regarded as obstructive to the communist dictatorship were incarcerated here. Its doors were finally closed in 1990. The remainder of the day and dinner are at your leisure. (B,L)

Begin the day with a guided tour of the impressive Jewish Museum. Afterward, continue to Schoneberg Town Hall where you will see the famous balcony where JFK made his famous speech in 1963, proclaiming “Ich bin ein Berliner.” Also, see the exhibit Wir waren Nachbarn which documents the lives of the Jewish residents who lived in this neighborhood and were deported to concentration camps and died during WWII. The balance of the day is free to explore the city on your own. This afternoon, you’re invited to the home of a local Berliner who will offer a personal account of life in Berlin during WWII and the Cold War years and see a private collection of art and antiques. In early evening, gather in the Smithsonian Journeys Travelers Corner to discuss the day’s experiences. (B)

This morning, depart the hotel for a short walk to the Pergamon Museum for a guided tour showcasing magnificent collections of Greek, Roman, and Islamic treasures. Note: The Pergamon Altar exhibit is currently under restoration and closed until 2023. Each traveler will receive a full-day Museum Island Pass that provides entrance to all five museums in the complex. The remainder of the day will be at leisure to explore the museums on your own. This evening, gather with fellow Smithsonian Journeys Travelers for a festive farewell dinner. (B,D)

Early this morning, transfer to Berlin’s Tegel Airport for return flights home. (B)