On a cruise under the midnight sun to Norway’s remote Svalbard archipelago, watch for polar bears, walruses, and other polar flora and fauna amid magnificent ice floes, fjords, and glaciers.

Round-trip from Longyearbyen Aboard the 264-guest L'Austral

On a cruise under the midnight sun to Norway’s remote Svalbard archipelago, watch for polar bears, walruses, and other polar flora and fauna amid magnificent ice floes, fjords, and glaciers.

No Single Supplement for select suites on our June 14, 2023 departure. Limited availability and subject to change. 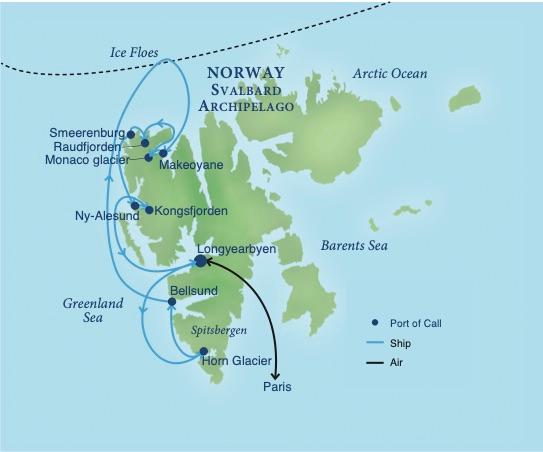 Experience a wondrous land of ice and wildlife under the midnight sun on a cruise to Norway’s remote Svalbard archipelago. Just over 600 miles from the North Pole, the nine islands of Svalbard are home to a host of rare creatures—from walruses to polar bears—as well as Europe’s largest ice cap. Learn about the environmental challenges to the Arctic as you explore glaciers and polar deserts at the 80˚ parallel north. Cruise through an ethereal gallery of raw geology, deep-blue fjords, and glittering ice—an unforgettable landscape enchanted by the glow of the midnight sun.

The Smithsonian Journeys / PONANT Experience: Each cruise will be accompanied by two Smithsonian Journeys Experts and a team of naturalist guides. Lectures and information sessions will cover wildlife, history, climate, environmental issues, and more. This program includes round-trip air from Paris to Longyearbyen.

This morning, fly to Longyearbyen, the capital of the Norwegian archipelago of Svalbard. Located on the main island of Spitsbergen, at 78 degrees north, this picturesque city is perched on the water and surrounded by glaciers and mountains. Board the ship after lunch and cruise north along the spectacular fjord-carved coast. (L,D)

Venture into Hornsund, one of the first fjords discovered by whalers in the 17th century. See its large population of little auks, and take in views of the eight glaciers that surround the fjord’s end. (B,L,D)

Follow the path of early explorers into Bellsund, where evidence of whaling and hunting stations can be found on the shore. Amid its lush valleys and tundra, seek out wildlife such as reindeer and arctic foxes. (B,L,D)

Day 4 — Sailing to the Ice Floe

Sail up to the edge of the ice floe, and, conditions permitting, ride a Zodiac amid these slabs of ice, which can harbor seabirds, seals, and polar bears. (B,L,D)

Cruise south to explore the Måkeøyane Archipelago. Continue to majestic Monaco Glacier, and watch for ice calving off its towering, blue-tinged wall. Polar bears and whales can often be spotted here. (B,L,D)

The Nordvest-Spitsbergen National Park was established in the early 1970s to protect this exceptional environment against the growing interest of the mining industry. Glaciers, large bays, and nunatuks make up this mystical landscape, as well as stretches of arctic tundra scattered with moss and lichen in shades of silver and gold. Many of Svalbard’s historic remains lie here as well—from the vestiges of 17th-century whaling stations to the camp of an unlucky 19th-century adventurer. In this pristine environment, you will be able to observe arctic terns and seals hauled out on the rocks that emerge at low tide.

Admire the spectacular ice formations of Raudfjorden. Then visit Smeerenburg, a former Dutch whaling colony that is one of Spitsbergen’s most important archaeological sites. (B,L,D)

Stop by the museum and post office in Ny-Ålesund, a former mining town from which Roald Amundsen’s Arctic expeditions departed. Then sail into one of the most beautiful fjords in Svalbard: Kongsfjorden, “the fjord of the King.” Here, snowcapped mountains cast their reflections in water scattered with superb icebergs. Keep your eye out for reindeer, barnacle geese, black guillemots, and a variety of duck species, as well as ringed and bearded seals sunbathing on the ice.  At the end of the fjord, admire the Kongsbreen (glacier of the King) and its three rocky points, named after three Scandinavian countries: Svea (Sweden), Dana (Denmark), and Nora (Norway). (B,L,D)

Return to Longyearbyen and disembark this morning. After lunch, transfer to the airport for your flight to Paris. (B,L)

Ports of call, visited sites, outings and landings will depend on weather conditions, position of ice, winds and the state of the sea. These can force a change of plans at any time. The Captain and the Expedition Leader may at any time cancel or stop any activity, or even modify the itinerary. The final itinerary will be confirmed by the Captain, who will take into account the touristic quality of the sites and above all, the safety of the passengers. Their decision will be based on advice from experts and authorities.

Glaciers and Geysers of Iceland’s Southern Coast: A Tailor-made Journey