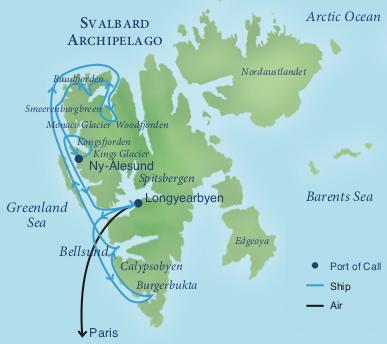 Under the Midnight Sun, only 600 miles from the North Pole, lies Norway’s Svalbard archipelago. Join us to cruise along the west coast of Spitsbergen to experience a strikingly beautiful wilderness known only to the adventurous few and learn about the environmental challenges to the Arctic.

Depart the U.S. for Paris, France, the “City of Lights.” Stay for one night in the deluxe, conveniently located Hilton Paris Charles De Gaulle Airport Hotel.

Fly to scenic Longyearbyen, located at 78 degrees north and only 650 miles from the North Pole and board your ship to embark on your seven-night expedition. Cruise through an ethereal gallery of rare wilderness, secluded fjords and glittering ice—an unforgettable landscape enchanted by the midnight sun’s glow.

Meet your expert naturalist team, who will be aboard for the duration of the cruise, and enjoy the Captain’s welcome reception that evening. (B,R,D)

Wind through pristine bays nestled in the Arctic’s recesses as you survey the stunning scenery for its king—the elusive polar bear. Navigate slow-drifting ice floes and snow-stripped cliffs by Zodiac in Burgerbukta; here, mountain ranges tower and glaciers crystallize to a bright-blue.

A shore excursion to the remote tidewater Samarin Glacier reveals a dramatic terrain of otherworldly ice frequented by seabirds such as kittiwakes and Brünnich’s guillemots. (B,L,D)

Continue to Camp Millar, once the gold mining base in Vårsolbukta and a favored grazing spot for endemic Svalbard reindeer. Watch for the deer ambling through the lush green tundra, where the tawny-green grass, richly fertilized by the large colony of hawks, contrasts with the frostily serene backdrop. (B,L,D)

Approach the Arctic Ice Pack at the approximate latitude of 80° north. The sheets of sea ice spanning the Arctic Ocean and its vicinity are home to the increasingly rare polar bear. Sea ice wanes in the warmer seasons and forms again as the winds chill, however, the dwindling midwinter ice causes polar bears to return later each season and travel further to their ice habitats, crucial zones for hunting, resting and breeding.

Take advantage of this unique opportunity to look for these majestic, ivory-furred creatures in their native Arctic-dwelling. (B,L,D)

Sail through Woodfjorden to Monaco Glacier, an actively calving ice sheet. Found at the end of the scenic Liefdefjorden, the tidewater glacier cleaves into a jagged topography of breathtaking snow-white and deep-sapphire. (B,L,D)

Hike along the shores of awe-inspiring Raudfjorden and admire rust-hued cliffs and unspoiled waters.

Enjoy an excursion to a prized resting shore for walruses, the former Dutch-Danish whaling station of Smeerenburg, which translates to “blubber town” in Dutch. (B,L,D)

On your walking tour of Ny-Alesund, one of the world’s northernmost year-round communities, learn about this research town’s rich history and scientific importance. Cruise by Zodiac through the spectacular inlet of Kongsfjorden to the impressive tidewater Kongsbreen, or King’s Glacier.

Disembark L’Boréal in Longyearbyen and fly to Paris, France.

Board your return flight home. (B)