Experience the White Continent of Antarctica in its unspoiled state—fantastically shaped icebergs, vast rocky promontories, and turquoise glaciers—during the lingering light of the austral summer. And discover first-hand how a diverse array of marine wildlife flourishes in this seemingly harsh environment.

Experience the White Continent of Antarctica in its unspoiled state—fantastically shaped icebergs, vast rocky promontories, and turquoise glaciers—during the lingering light of the austral summer. And discover first-hand how a diverse array of marine wildlife flourishes in this seemingly harsh environment.

There is no comparison! This trip was the best trip I've ever been on in almost 50 years of international travel.

This was a once in a lifetime expedition trip. Arrangements and execution of all facets of the Antarctica journey including ship to beach and land-based expeditions were rewarding and memorable.

This trip was the perfect combination of knowledgeable guides and lecturers, small group size, wonderful ship, and the most spectacular destination imaginable. 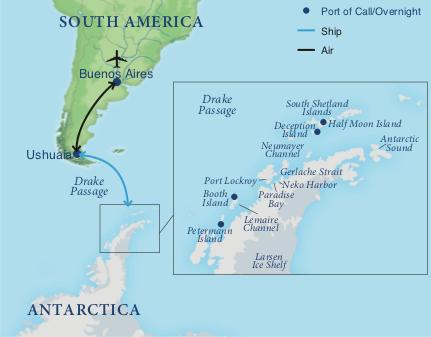 The Iguazú Falls are located within breathtaking virgin rainforests along the Brazil-Argentina frontier and feature more than 270 falls cascading from heights of 350 feet through the jungle. Iguazú is home to more than 500 species of birds, 80 types of mammals, and a mind-boggling array of reptiles, fish, butterflies, and flora. This exclusive three-night Post-Program Option features accommodations in the deluxe Melia Iguazú Falls Resort & Spa and InterContinental Buenos Aires. Airfare round trip Buenos Aires is included.

Tour extensions are available at additional cost. Details will be provided with your reservation confirmation.

There is no comparison! This trip was the best trip I've ever been on in almost 50 years of international travel.

This was a once in a lifetime expedition trip. Arrangements and execution of all facets of the Antarctica journey including ship to beach and land-based expeditions were rewarding and memorable.

This trip was the perfect combination of knowledgeable guides and lecturers, small group size, wonderful ship, and the most spectacular destination imaginable.

Arrive in cosmopolitan Buenos Aires and check into your deluxe hotel. Attend the welcome reception this evening. (R)

Visit the city’s historic Recoleta Cemetery, famous for its ornate vaults and sculptures and as the final resting place of the legendary Evita Perón, the former First Lady of Argentina. (B)

This morning, fly to remote Ushuaia. Ushuaia is known as the gateway to Antarctica, the world’s southernmost city and capital of Tierra del Fuego. This afternoon, embark the ship and cruise through the Beagle Channel, named after the ship that carried Charles Darwin on his South American voyages. Attend the captain’s welcome reception this evening. (B,R,D)

Cross the legendary Drake Passage and, upon reaching the Antarctic Convergence, watch for breaching fin, humpback and minke whales and seabirds feeding on plankton and krill brought to the surface by cold Antarctic currents merging with warmer waters of the South Pacific and Atlantic Oceans. The expedition team of naturalist guides will present insightful lectures to prepare you for your first landing in Antarctica. (2B,2L,2D)

Cruise below the 60th parallel to the outer shores and islands of the Antarctic Peninsula, Earth’s last frontier. Here, explore some of the world’s most pristine wilderness, where towering mountains of ice and lava create precipitous coastlines and islands, and ever-changing patterns of ice stretch as far as the eye can see. In this seemingly harsh environment, a vast array of marine wildlife flourishes, including millions of penguins, countless seabirds and thousands of seals and whales. From spectacular volcanic topography and majestic glaciers to fascinating wildlife and historic outposts, this itinerary reveals the highlights of Earth’s most inaccessible continent for the complete Antarctic experience.

Please note that the ship’s cruising pattern and positionings are dependent on weather, ice, and sea conditions and are subject to change.

Cruise through breathtaking, glacier-lined Neumayer Channel to rugged Goudier Island. Visit Port Lockroy, originally constructed in 1944 by an eight-man team as an intelligence post for British espionage during World War II and converted into a whaling station and scientific base in the 1950s. It is nestled among glistening mountain peaks as high as 6000 feet, and the surrounding grounds are populated by blue-eyed shags and gentoo penguins. Gain insight into the daily activities of past researchers at the living museum known as “Base A” and mail a postcard stamped with an Antarctica postmark from the official British Post Office.

Just beyond Port Lockroy, the rocky shores of Jougla Point on Wiencke Island offer a rare opportunity to view the skeletal remains of an adult blue whale and to see populous colonies of gentoo penguins and kelp gulls. Call at Petermann Island, the southernmost point of your journey, and watch its thriving rookeries of Adélie and gentoo penguins and blue-eyed shags.

Flanked by sheer cliffs of towering glaciers between the Antarctic Peninsula and Booth Island, cruise through the Lemaire Channel, offering views of seven majestic miles of mountains and wildlife combined with fascinating patterns of ice floes.

Listen for the low rumbling of Rudolf Glacier as it calves chunks of ice into Neko Harbor, named for an early 20th-century whaling boat. The harbor is surrounded by soaring glaciers and snow-covered mountains and is one of the most dramatic and spectacular sights in Antarctica. Here, make your first “continental landing” in Antarctica.

In Paradise Bay, awesome cliffs of ice descend from the surrounding mountains into the floating iceberg-laden waters along the western coast of the Antarctic Peninsula. Named by 19th-century whalers who sought shelter in its coves, Paradise Bay is an ideal sanctuary for marine wildlife including humpback whales, crabeater seals and Cape petrels.

Deception Island is actually the rim of a massive dormant volcano crater that encircles a caldera known as Port Foster, where the ship enters through dramatic Neptune’s Bellows, a sublime harbor ringed by snowcapped peaks and sheer cliffs. In Pendulum Cove, see the steaming, geothermally heated waters of the Antarctic. Observe the amazing colony of tens of thousands of chinstrap penguins at Baily Head. Then walk along the black sand beaches of Telefon Bay to nearby craters, which offer fascinating insight into the volcanic activity that created the island and played a pivotal role in the natural history of the region.

One of the smallest but most beautiful of the South Shetland Islands, Half Moon Island is a crescent-shaped isle known for its craggy volcanic rock formations and tranquil lagoons. It is also the site of Cámara Station, a base monitored by Argentine biologists studying regional wildlife. Here, observe the antics of the island’s colony of chinstrap penguins and enjoy the lingering twilight of the Antarctic summer.

Relax and reflect on board as the ship turns north and crosses the Drake Passage. Enjoy lively, informative discussions with the ship’s naturalists. Watch for endangered albatross and the many different species of petrels as you cruise across the Antarctic Convergence. (B,L,D)

Disembark and fly to Buenos Aires. Continue on the Iguazú Falls Post-Program Option with an overnight stay in Buenos Aires, or depart for the United States. (B)