Experience an astonishing sweep of history and culture on a voyage from the sacred sites of the Holy Land and the Pyramids of Giza to the archaeological wonders of Turkey and Greece—and delve into the rich culinary traditions of Cyprus along the way.

Experience an astonishing sweep of history and culture on a voyage from the sacred sites of the Holy Land and the Pyramids of Giza to the archaeological wonders of Turkey and Greece—and delve into the rich culinary traditions of Cyprus along the way. 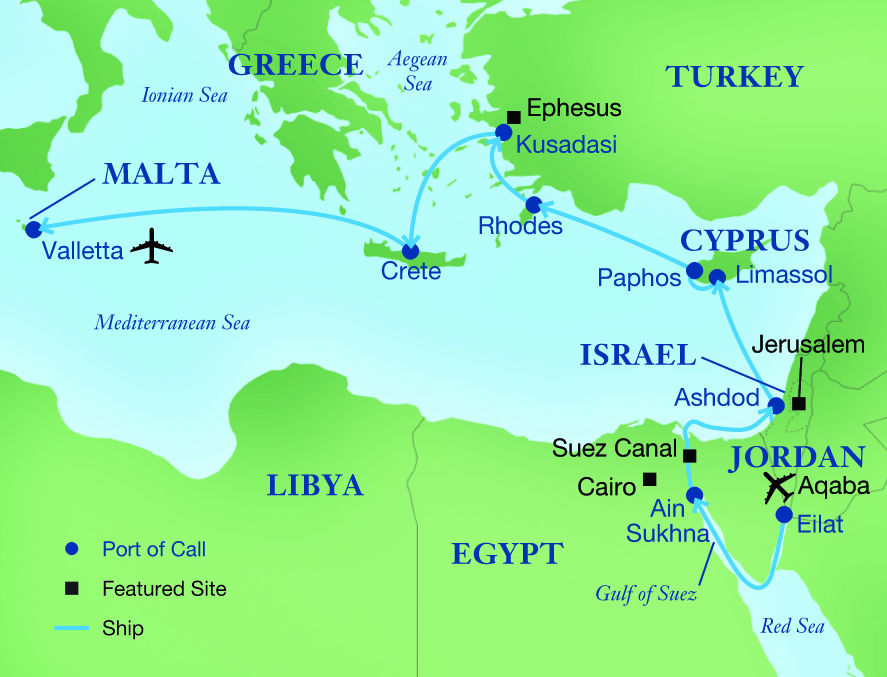 Over thousands of years, great civilizations and enduring religious movements have made their mark across the eastern Mediterranean, leaving us with soaring pyramids, spectacular mosaics and frescos, and some of the most sacred monuments on Earth. Experience a vast sweep of history on a voyage from the Red Sea to Malta, encountering the palaces of the Bronze Age Minoans on Crete, the Pyramids of Giza, and the Greco-Roman cities of Ephesus and Paphos. Explore the holy sites of three world religions in Jerusalem’s Old City and discover the legacy of the knights of the Crusades in Rhodes. Along the way, float in the Dead Sea, sail the Suez Canal, and enjoy a delectable culinary adventure in the charming villages of Cyprus.

The Smithsonian Journeys / PONANT  Experience: Each cruise will be accompanied by two Smithsonian Journeys Experts. An excursion or activity is included in each port of call. You may have a choice of excursions in many ports so that you can delve more deeply into subjects that interest you.

Arrive in Aqaba, Jordan’s main Red Sea port, and board the ship in the afternoon. A short evening voyage brings you to neighboring Eilat, where the ship will remain docked for the night. The following day, choose to travel north to the Roman fortress of Masada, built by King Herod atop an isolated plateau. As you explore ancient defensive towers, palaces, and one of the world’s oldest synagogues, retrace the captivating history of the site, where some 960 besieged Jews held off the Roman army in 73 AD before sacrificing themselves to avoid enslavement. Descend to the lowest point on Earth, the Dead Sea, and enjoy lunch and a swim in the buoyant, saline water, known for its therapeutic qualities. Alternatively, head to Timna Park for a visit to King Solomon’s copper mines, where the Egyptians sourced copper as early as the 11th century BC. Examine hieroglyphs at an Egyptian temple that guards the site, and see the towering rocks known as Solomon’s Pillars. Back in Eilat, get a glimpse at the vibrant reefs and tropical marine life of the Red Sea at an underwater aquarium. (B,L,D)

During a day on the water, sail out of the Gulf of Aqaba to the Red Sea, and round the tip of the Sinai Peninsula to enter the Gulf of Suez. Attend talks by your Smithsonian Journeys Experts and other guest speakers, relax by the pool, or take in a show in the onboard theater. (B,L,D)

Go ashore at Ain Sukhna, and travel through the desert to the Pyramids of Giza, just west of Cairo. Here, encounter the only wonder that remains of the Seven Wonders of the Ancient World: the Great Pyramid of Khufu. Explore the three main pyramids at the site, built as tombs for pharaohs of Egypt’s 4th dynasty. See the fabled Sphinx, carved out of rock around 2650 BC; then gather for lunch at the historic Mena House, located in the shadow of the pyramids. Enjoy a lecture by a renowned professor from Cairo University before visiting the new Grand Egyptian Museum, an incredible trove of ancient Egyptian artifacts, including the treasures of King Tutankhamen’s tomb—a highlight of the visit. Return to the ship late this afternoon. Tonight, begin your passage through the Suez Canal. Spend the next day following the narrow canal north and enjoying lectures and time at leisure on board. (B,L,D)

Day 6 — Jerusalem and The Holy Land

Awaken in Ashdod, an Israeli port town just south of Tel Aviv. Head east to the holy city of Jerusalem, stopping first on the Mount of Olives to take in a spectacular view of the Old City. Visit the Church of All Nations, next to the Garden of Gethsemane, where Jesus prayed before his arrest. Then delve into the evocative streets of the Old City on a walking tour, entering from the Zion Gate and strolling the Via Dolorosa. Visit the Armenian and Jewish Quarters, lined with the city’s legendary golden-stone architecture, and see the sacred sites of three faiths: the Christian Church of the Holy Sepulchre; the Western Wall, the most important Jewish prayer and pilgrimage site; and the glittering Dome of the Rock, which marks the spot where the Muslim prophet Mohammed is said to have ascended to heaven. Return to the ship late this afternoon. (B,L,D)

Set at the crossroads of the Mediterranean and the Middle East, Cyprus has developed a unique cuisine that spotlights the island’s fresh herbs, produce, and olive oil. Set out on a tour of local culinary traditions, driving into the wine-producing regions of western Cyprus. Start in the village of Letymbou with a real Cypriot coffee, then learn to concoct the island’s famous cheese, halloumi, and enjoy a tasting. Try your hand at making traditional sourdough bread and sample loukoumades, a popular desert of beignets drizzled with honey. Visit the village’s lovely Byzantine church before a tasting at a boutique winery that features Cypriot grape varietals. Your tour continues with a typical meze lunch featuring a range of hot and cold small plates, a main dish, and a traditional desert. Later, stop at Peyia to see the famous Edro III shipwreck just off the coast. (B,L,D)

Spend the day in the World Heritage site of Paphos, once the center of the cult of Aphrodite, the Greek goddess of love and beauty. At the remarkable archaeological site here, venture into the Tombs of Kings, a complex network of underground burial chambers cut into the rock. In the seaside town of Yersokipou, see Aphrodite’s legendary sacred garden and the impressive, five-domed Byzantine church of Agia Paraskevi. Return to Paphos to continue exploring layers of history, from castles and medieval monasteries to the House of Dionysos, a 3rd-century villa adorned with exquisite mosaics. Discover charming Paphos harbor during free time before returning to the ship. (B,L,D)

Poised just off the coast of Turkey, Rhodes is a living testament to history of the Mediterranean, bearing evidence of the ancient Greeks, Romans, Crusaders, Ottomans, and Venetians who occupied the island over the centuries. Discover Rhodes’ cultural treasures on a walking tour that includes the Palace of the Grand Master and the Street of the Knights, a cobbled lane flanked by beautifully preserved medieval buildings that once housed the Knights of St. John. Or drive through citrus groves to Lindos, set dramatically between cliffs, and visit the hilltop Acropolis and its Doric Temple of Athena Lindia. You may also choose to learn the secrets of Greek cuisine during a cooking class and a meal at a popular restaurant. (B,L,D)

Go ashore at Kusadasi and travel inland to Ephesus, one of the most beautifully preserved Greco-Roman cities in the world.  Explore its many temples, including the Temple of Hadrian, and encounter the legendary Library of Celsus, one of the largest in the Roman Empire. Venture into the immense theater, known for its excellent acoustics and still in use today.  Stroll the Sacred Way, once lined with the homes of the aristocracy, and see traces of an innovative water and sewer system built beneath the marble paving stones. Gain insight into family life at the acclaimed Terrace Houses, the residences of wealthy Ephesians from the 1st to the 7th centuries, equipped with running water and heating systems and adorned with frescos and mosaics. This afternoon, sail toward the Greek island of Crete. (B,L,D)

Considered the birthplace of Zeus, the island of Crete was the heart of the sophisticated Minoan civilization. Take a morning tour of the Palace of Knossos, the political center of Minoans and the site of the Minotaur’s labyrinth in ancient Greek mythology. Walk among its re-creations and ruins, admiring the frescoes and architectural flourishes of a once-grand city. Next, visit Heraklion’s Archaeological Museum, which houses artifacts representing 5,500 years of Cretan history, from the Neolithic period to Roman times. Examine the renowned Minoan collection, much of which was excavated from the Palace of Knossos. Enjoy a lunch at an elegant restaurant featuring ingredients sourced from the surrounding villages. (B,L)

Spend a day sailing west and enjoying the many amenities aboard the ship. Opt for a treatment in the spa, read a book on the sundeck, or attend a talk by your Smithsonian Journeys Experts. After breakfast the following day, disembark in Valletta and transfer to the airport for your flight home. (B)