Surround yourself with extraordinary mountain vistas as you cross the Alps—and six countries—aboard the stunning Golden Eagle Danube Express on a rail journey from Budapest to Venice that includes stops in Innsbruck, Zurich, Lake Como, Lake Bled, and more.

Across the Alps: A Deluxe Rail Journey

From Budapest to Venice aboard the  Danube Express

Surround yourself with extraordinary mountain vistas as you cross the Alps—and six countries—aboard the stunning Golden Eagle Danube Express on a rail journey from Budapest to Venice that includes stops in Innsbruck, Zurich, Lake Como, Lake Bled, and more.

Save $1,600 per person when you book today! (Limited availability. Book early to ensure your place.) 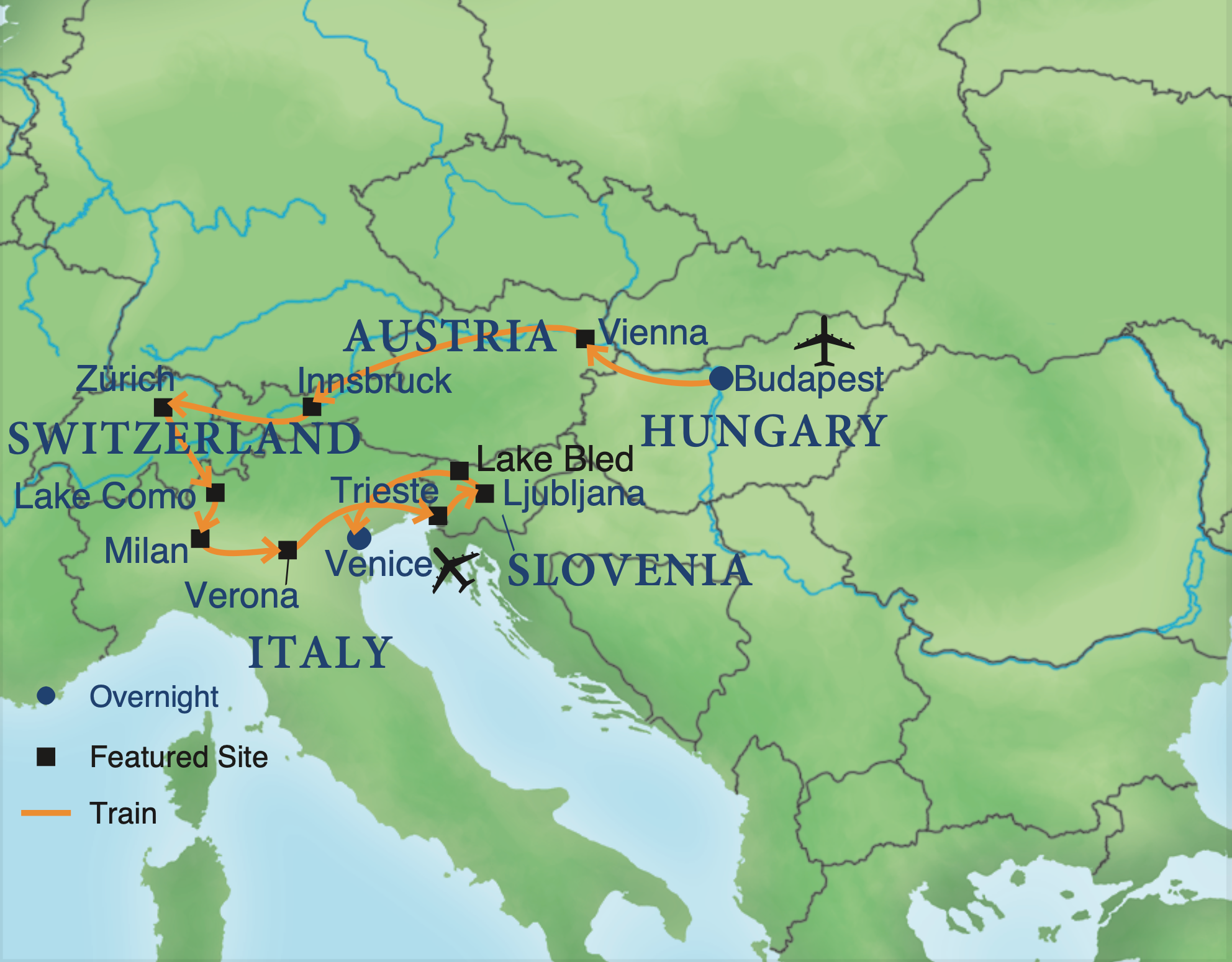 Board the stunning Golden Eagle Danube Express in Budapest and travel west into the glorious Alps, experiencing magnificent mountain vistas and storied cities in five countries. Follow the World Heritage-listed Semmering Railway deep into the Austrian Alps, cruise across Italy’s Lake Como, and traverse the gorgeous Julian Alps to Slovenia’s Lake Bled. Delve into history and culture in cities such as Zurich, Milan, Verona, and Ljubljana, and cap off your journey with two nights in the heart of Venice.

Arrive in Budapest, and transfer to your hotel, an Art Nouveau landmark in the historic heart of Pest that offers sweeping views across the Danube. Gather for a welcome dinner in the hotel’s elegant restaurant this evening. (D)

Uncover layers of history—from the Roman era and the Mongol invasion to the rule of the Magyars and the Habsburg emperors—as you tour the twin cities of Buda and Pest.  Explore Buda’s Castle Hill, visiting the 13th-century Matthias Church, where Habsburg coronations took place, and the Citadel. Take in panoramic city views from Gellert Hill, and then descend to Pest for a city tour that includes St. Stephen’s Cathedral; Heroes Square; and the opulent Opera House, whose façade is adorned with statues of some of history’s greatest composers. The afternoon is yours to discover the city as you wish. You might meander among the abundant produce and wine stalls of the Great Market Hall or visit one of the city’s famous thermal baths. (B,L,D)

Your day kicks off with a reception in the Royal Waiting Room at Budapest Nyugati station—an exclusive chamber where the Habsburg family would await their trains away from the crowds. Then settle into your cabin on the Golden Eagle Danube Express and sit down to lunch as the train makes its way towards Austria.

Arrive in Vienna, a city of extraordinary cultural riches with a long legacy as a capital of classical music. Get a taste of local life at the bustling Naschmarkt, where produce and other goods have been sold since the 1700s, and visit Schönbrunn Palace, once the sumptuous summer palace of the Habsburgs. Or take advantage of free time to explore the city’s World Heritage-listed center on your own. Gather tonight for a private concert featuring the Vienna Supreme Orchestra. (B,L,D)

Enjoy a day of spectacular mountain scenery as the train heads into the Austrian Alps. Have your camera close at hand as you follow the World Heritage-listed Semmering Railway, an outstanding civil engineering feat built in the 1850s, with 15 tunnels, 16 viaducts, and more than 100 stone bridges creating a passage through 25 miles of mountains. After lunch, enjoy a cruise on picturesque Lake Achen (Achensee) and continue through the Tyrolean countryside to the charming town Innsbruck. Delve into the Altstadt, or Old Town, where medieval houses and baroque churches stand against the vertical backdrop of the Nordkette Alps. Soar up to the summits aboard a futuristic funicular designed by renowned architect Zaha Hadid and take in an extraordinary vista. (B,L,D)

Spend a relaxing morning aboard the Golden Eagle Danube Express, watching the lovely scenery of Vorarlberg, Austria’s westernmost region, unfold. Cross Liechtenstein and enter Switzerland, tracing the length of Lake Zürich all the way to the city itself.  A financial hub with an artsy edge, Zürich is an inviting mix of the old and the new. Discover the interesting crossroads of the financial world and the arts on an afternoon tour of this Swiss-German-speaking city. See the Fraumünster, a 13th-century church with stained glass windows crafted by Marc Chagalland the Cabaret Voltaire, where the Dada movement was born during World War I. During your stay, enjoy a traditional Swiss fondue tasting. (B,L,D)

Follow the shores of Lakes Zug and Lucerne and then cross St. Gotthard Pass, descending via Lugano into Italy. Stop for lunch on the shores of Lake Como, nestled amid majestic mountains and dramatic cliffs. Sail past stunning gardens and villas during a lake cruise and go ashore to stroll through the beautiful town of Bellagio. Continue to Milan, Italy’s capital of fashion and soccer. Visit the city’s two most famous sites: the ornate Gothic Duomo, which took some 600 years to complete, and the Teatro alla Scala, one of the world’s most celebrated opera houses. Cap off your day with a delicious pizza tasting. (B,L,D)

Travel across Lombardy to the southern shores of Lake Garda and arrive in Verona, the city where Shakespeare set Romeo and Juliet. On a walking tour, explore the medieval old town, a World Heritage site, and its first-century Roman arena. Enjoy lunch on board as we continue east to Trieste, an Italian port that was once part of the Austro-Hungarian Empire. Now surrounded by Slovenia, Trieste boasts a culture and dialect all its own. Visit the seaside Miramare Castle and the immense Piazza della Unita d’Italia, and admire the Byzantine architecture and mosaics of the hilltop Church of San Giusto. (B,L,D)

Awaken early to witness the journey through Slovenia’s spectacular Julian Alps. Your destination is fabled Lake Bled, a glacial lake best known for the tiny island with a 15th-century church at its center. High on a rocky crag at the water’s edge, Bled Castle has presided over the lake since the 11th century. Step back in time on a tour of the castle—now a museum—which remains as it would have looked in the 15th and 16th century. Your next stop is the delightful capital of Ljubljana, an architectural gem filled with baroque, Renaissance, Venetian, and Austrian Art Nouveau styles. On an afternoon tour, admire the graceful bridges and design of Slovenian architect and urban planner Jože Plečnik, whose contributions earned the city World Heritage status. (B,L,D)

This morning, venture into the Postojna Caves, a vast underground network of caverns and tunnels covered with stalactites and stalagmites. First described in the 17th century, the caves are located below the vast limestone Kras Plateau that gave the world the term karst topography. Board a specially designed train for a tour of its natural chambers and passages, and keep an eye out for the unusual salamander species that lives within. This afternoon, your train makes its way toward Venice, transiting the causeway across Venice Lagoon. Arrive in the heart of the old city after lunch and bid farewell to your train crew. Check in to your hotel, just steps from St. Mark’s Square and enjoy free time to explore the city and its legendary canals. (B,L,D)

Made up of 118 islands stitched together by 409 bridges and more than 177 canals, Venice is a hub of art and creativity and where history is on display at every turn. A UNESCO World Heritage Site since 1987, the city is crowded with gorgeous old palazzi (palaces), which in turn are filled with more art per square mile than any other European city.  Set out on a walking tour of this unique city, following winding lanes along the Grand Canal to St. Mark’s Square. Meander through the Rialto Market before ending the tour in typical Venetian fashion: gliding in a gondola along the canals. Alternatively, discover the city at your own pace today. You might visit the artists’ district of Dorsoduro and take in the views from the Accademia Bridge. Gather in the evening to toast your Alpine journey at a farewell reception and dinner. (B,L,D)

After breakfast at your hotel this morning, transfer to the airport for your onward flight. Or choose to extend your stay in Venice. (B) Treasures of the Alps: Swiss Trains and Italy's Lake District 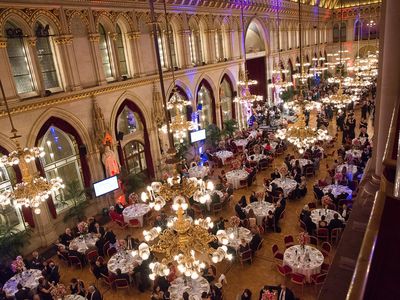