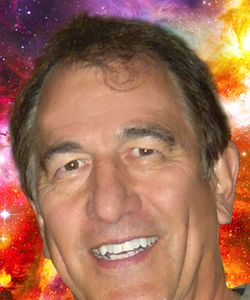 A naturalist, astronomer, author and space artist, David's expertise is in communicating the wonder of science. He is the past Director of Science Information and Public Outreach at the Harvard-Smithsonian Center for Astrophysics in Cambridge, MA. In 2015, he left Harvard to join NASAs New Horizons special media team on the Pluto flyby mission.  He is a Random House/Smithsonian and National Geographic author and illustrator of 7 books on astronomy including "Cosmic Catastrophes - 7 Ways to Destroy a Planet Like Earth"; "ALIEN WORLDS"- a look at how bizarre alien life may be throughout the Universe; "13 Planets", and "Space Encyclopedia". He is past Director of Fiske Planetarium and Science Center, and the founder of the Science Discovery Program at University of Colorado Boulder; past Marketing Communications Director at Ball Aerospace and Technologies Corporation and member of the Hubble Space Telescope repair team; past Marketing Director of "Evolution", PBS's Emmy-winning 7-part NOVA series.

He is a Premier Smithsonian Enrichment Lecturer and a Harvard World Tours Expert Study Leader. Past study tours include: Astronomy from the Chilean Andes; Astronomy of Hawaii; The Underwater Worlds of Tahiti and French Polynesia; Exploring the Amazon; AfricanSafari; Discovering Alaska!; Iceland - Land of Ice and Fire; Mysteries of Machu Picchu and Easter Island; Voyage to Antarctica; Inside the Russian Space Program-a journey to Kazakhstan for the launch of cosmonauts to the International Space Station; In The Footsteps of Galileo; Around theWorld by Private Jet!; Exploring the Emerald British Isles; Treasures of Mystical India; Arizona Astronomy. He has lectured on eighteen World Cruises aboard ships Regent Seven Seas Voyager, Mariner, Explorer; Crystal Serenity, Symphony; Celebrity Solstice, Equinox, Eclipse; and The WORLD.

He has the added distinction, along with his former band, of being a 2008 Grammy-nominated songwriter and musician. In 2010, ASTEROID 1990DA was named in honor of his exceptional science educational outreach efforts. Today, David and wife Astrid reside under the very starry skies outside of Aspen, CO.

Intelligent and personable. His passion and excitement for the subject was contagious. …I don't think I've ever met someone who has lived life so thoroughly.

Very good at bringing complex ideas to those of us who were less versed in astronomy.  Great sense of humor and he made the effort to talk to everyone on the tour individually.

Davis was astounding.  Every lecture was remarkable.  We learned so much and were awestruck by his knowledge.

Q: On our private jet expeditions, Smithsonian Journeys travelers visit some of the world's most intriguing ancient civilizations. Stops on past tours have included the Pre-Columbian Mayan ceremonial site at Tikal; the lost city of the Incas, Machu Picchu and Easter Island, the isolated Polynesian outpost. What evidence of astronomical observation can be seen at these sites?

A: Tikal, also known by the Mayans as the "city of voices", features soaring limestone temples positioned to follow the motions of the Sun and Moon, Venus, Mars and Jupiter across the sky. In Machu Picchu, two observatories were constructed. The 'stone pillar' in the center of the Temple of the Sun was used for "tying the Sun" (a ritual involving priests and rope) during the winter solstice to keep the sun from disappearing beneath the Earth. The Temple of the Moon, located at the summit of Huayna Picchu, a 7,000-foot mountain behind the city, was used for sacrifices during the full moon. On the other hand, the stone faces of Easter Island, called Ahu, were set with their backs to the sea. This was a culture devoid of astronomy or mathematics... culture that looked inward and not outward to the cosmos for answers.

Q: What clues do we have as to how ancient inhabitants of these sites interpreted regularly occurring phenomena like meteor showers and the phases of the moon, as good omens or bad ones? Can we see any evidence of whether they documented eclipses?

A: The Incas and Mayans gained knowledge of the skies from centuries of observing the motions of the stars, Sun and Moon and keeping precise records of their observations. They were the ancient calendar makers. We do not find records of occurrences like great comets or meteor showers, however eclipses and the positions of the rising and setting Sun throughout the year were carefully recorded. In the city of Cuzco, stone towers were built where the sun would rise and set on days of the solstice and equinox. The Milky Way, known as "Mayu" which means "river" and the group of stars called the Pleiades were very special celestial objects to the Inca. This was where they believed all the stars in the animal constellations went to sleep in the daytime.

Q: Our private jet travelers spend a good deal of time in the Southern Hemisphere. What are some of the differences they can notice when viewing the southerly skies?

A : The southern skies present a cornucopia of delights for stellar explorers with binoculars and small telescopes. There is the little secret all astronomers know—the stars of the Southern Hemisphere are much more dazzling and interesting than anything found in the Northern Hemisphere. Here the Milky Way dominates the dark vault of the heavens richly festooned with bright red nebula—the birthing nurseries of new stars. Here is where the jewel of the night, the Southern Cross, glows brightly above and the closest star to the sun, Proxima Centauri, shines brightly down upon us 4.2 light years away.

Q: The first telescopes were invented in the 1600s and showed humans there was more to the Universe than meets the eye. Now that we have solved some of the riddles, there seem to be more and more questions! Our trip to the Smithsonian's Observatories in Arizona explores many of these questions, including the Big Bang. What is the current thinking among your colleagues at the Smithsonian Center for Astrophysics about its origins?

A: Current thinking is that the Big Bang, that created our universe and everything in it, may be just one of numerous other Big Bangs that have occurred throughout time. There may exist all around us in different dimensions, vast universes like and unlike our own. In some of them, the laws of physics may be very different; time may run differently...some of these other universes may be sterile—void of life. Others may be more bizarre than we can ever imagine...

Q: What were some of your favorite experiences on our private jet tour?

A: Top on my list is the eclipse of the Sun in Australia with Easter Island coming in a close second. However, Tikal and Machu Picchu are magical, never to be forgotten, wonders to see and experience. In Tikal, pointed temples thrust out of the rainforest canopy in a landscape that stunned early Spanish explorers. Here they found a city of 2 million people—a community larger than any city in Europe—with multi-colored striped buildings, carved stone temples, sacrificing stones where captured prisoners were sacrificed to the gods, surrounded by invisible howler monkeys in the rainforest that sounded more like roaring dinosaurs than primate cousins.