A Smithsonian Journeys Around the World Adventure, Part III

Sitting on the Equator, twice the size of California, Tanzania is home to Serengeti National Park, itself a World Heritage site. We arrived at Kilimanjaro International Airport in Arusha, Tanzania, and from our aerial vantage point we could watch camels crossing the desert and dust devils stirring up. After customs and immigration, we boarded several smaller planes for the hour-long flight to Seronera Airstrip in the Serengeti. There, we settled into six-passenger jeeps, the type with open-air headspace. We could stand, watch and photograph the real show: sighting the wildlife of the Serengeti. 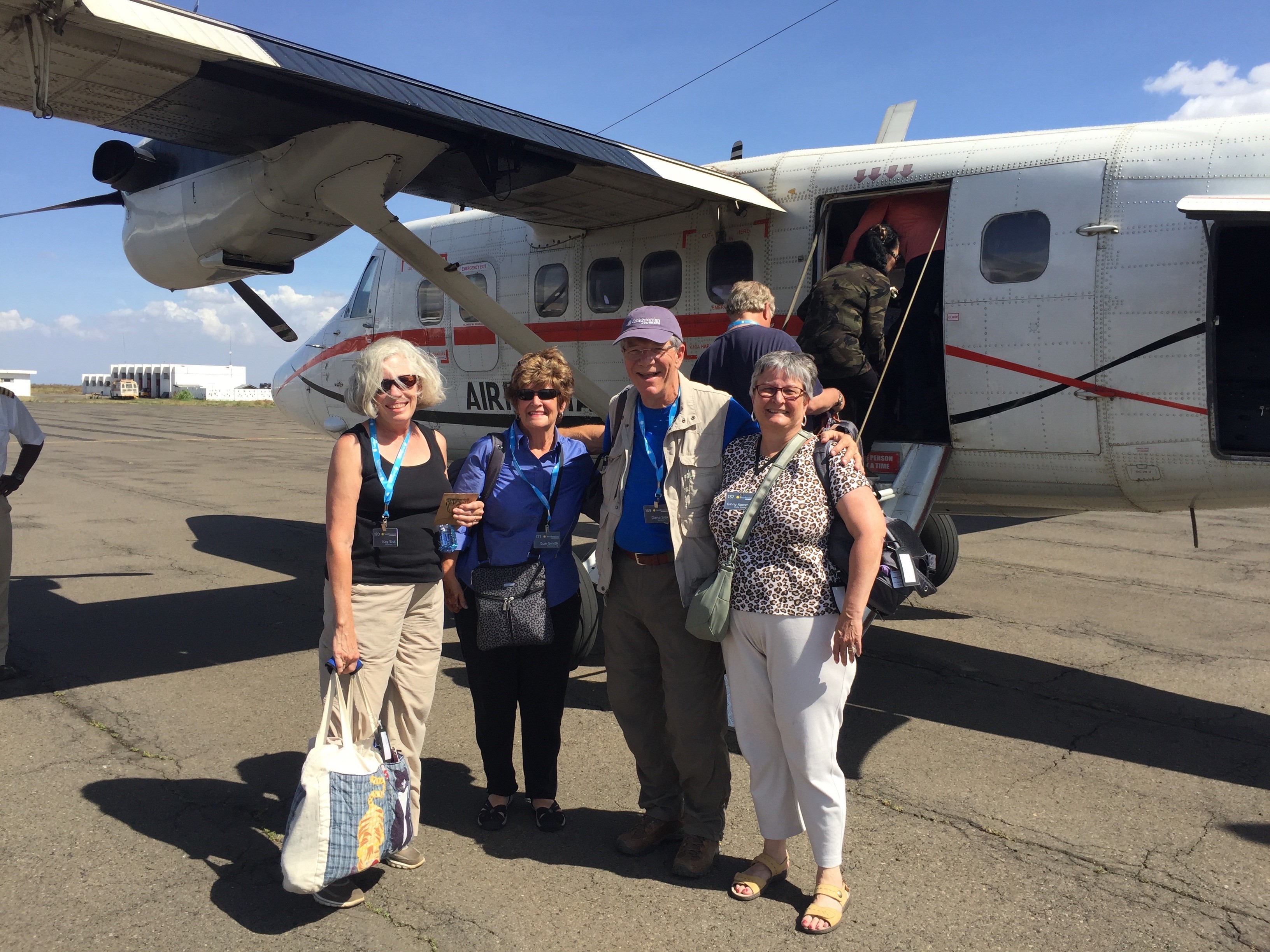 Waiting to board! Credit: Kay Sisk.

Each region of Africa has its own Big 5. The Serengeti’s are the elephant, Cape buffalo, lion, leopard and rhino. We saw all but the latter and I gathered from our guides it was the wrong time of year—or we were in the wrong part of the National Park—to see them.

We had arrived at the beginning of the Great Migration, when the wildebeest, the keystone species of the Serengeti, begin their long trek from north to south. Their single file lines would stretch for a mile, making it all the easier for those that depended upon them for sustenance to get a good meal.

We were not to our hotel, the Four Seasons Safari Lodge Serengeti, when we observed the other jeeps pulled over, everyone fixated on a swath of tall grass. This became a common occurrence, one jeep spotting something and all the others rushing to pull in and find it! But this time, we had the prize. While the others were watching a young leopard, we had the pleasure of seeing—and photographing—mother leopard as she calmly crossed the road in front of us. She didn’t give us a second look or thought, just went towards her kitten. Minutes later, young one number two joined them and then, like magic!, they disappeared into the grass. 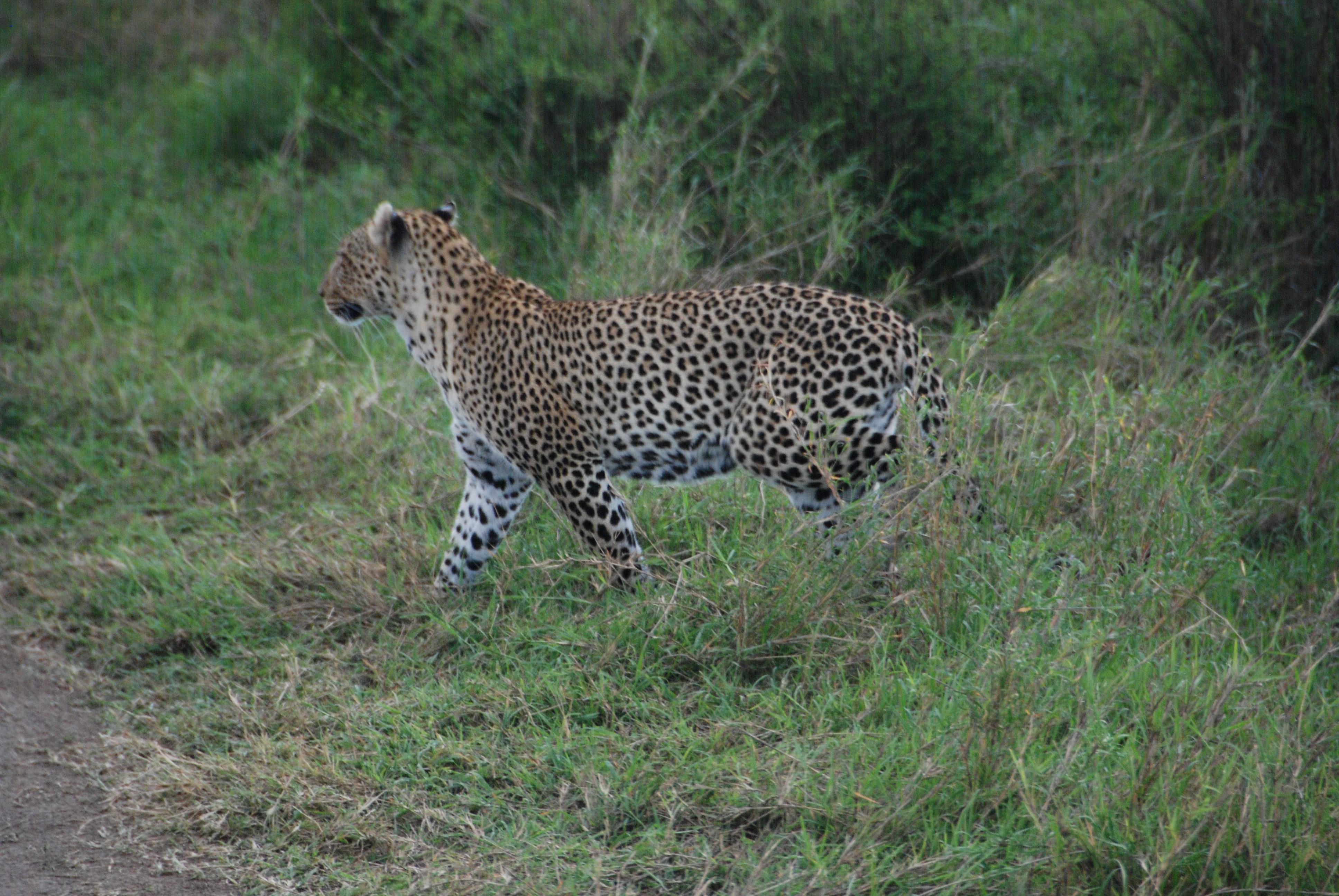 Our hotel being inside the Park, there were no strong fences to separate us from the animal world. In the evenings we were not to go to our rooms without a Masai escort. At all times, the sliding doors were to remain locked. Not just closed, but locked against a marauding baboon. Members of our party found out the hard way when they forgot to lock the door and the clever creature raided the coffee sugar and cough drops, making a huge mess! That wasn’t as harrowing as what happened in the next room when a member of our party set her tea cup on the patio, went back in to the room for something, turned around and found the baboon already inside the room. I think I would have left by the front door, but she calmly handed him something to eat and he exited. I envy that presence of mind.

All  too quickly, our visit to the Serengeti was over. It is definitely on my come-back-to list.

We arrived in Jordan near sunset and it was dark by the time our two-hour bus ride to Petra was over, so we didn’t get a good look at the either the town or the countryside that day. 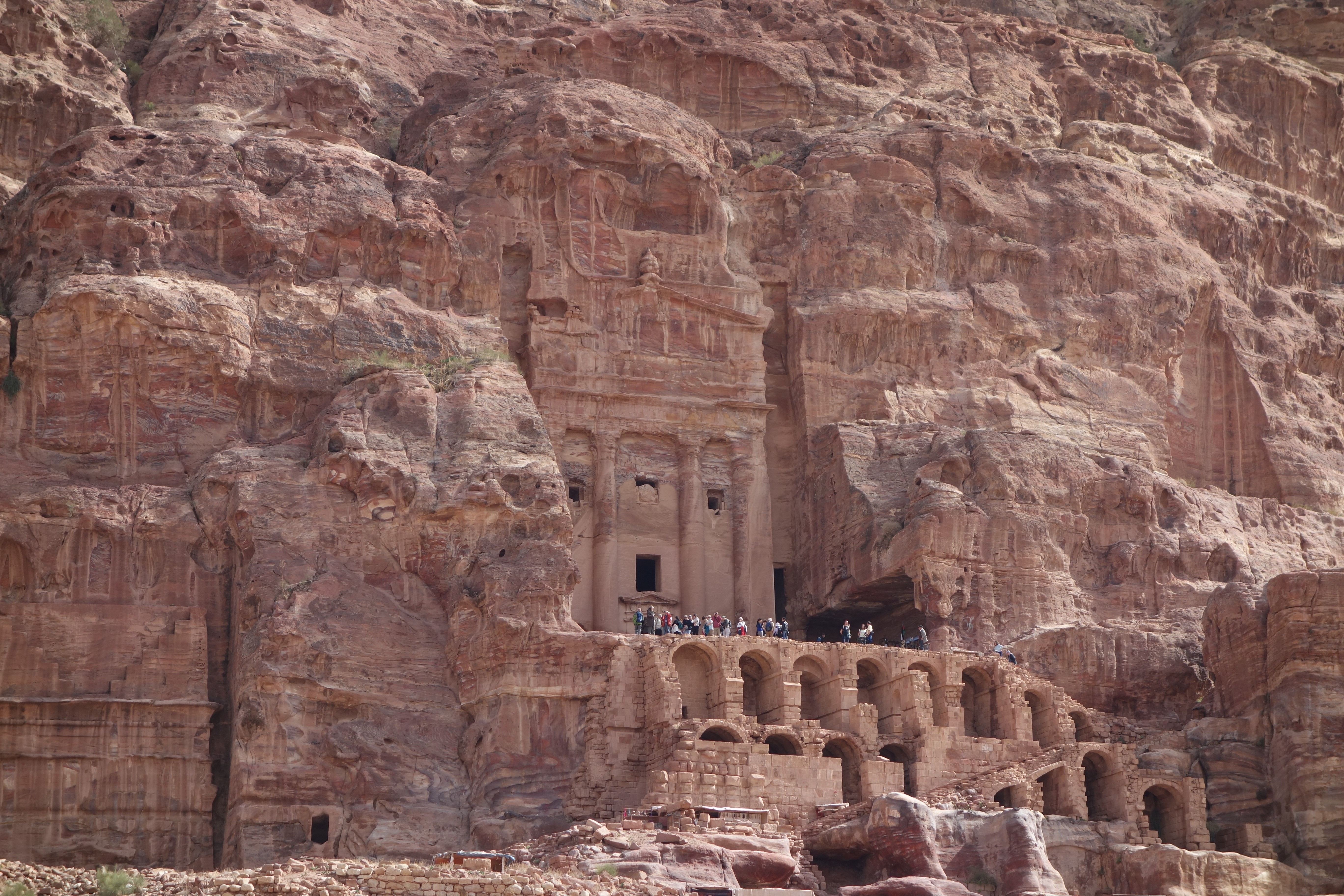 Petra, known to most of us for its everlasting image in Indiana Jones and the Last Crusade, was named one of the New Seven Wonders of the World in 2007, while it had been a World Heritage site since 1985. And indeed, after the mile-long walk down the gorge, to see the first glimpse of the Treasury is smile-inducing. Am I really here?

Petra was built by the Nabataeans, perhaps as early as the 5th century BC, and was an important center for trading. It contained tombs, temples, and houses all hewn from the sandstone. In the midst of the desert, the Nabataeans had an elaborate water system, some of which is still visible. After the Romans took over in 106 AD, Petra’s importance lessened. Aided by earthquakes and changing trade routes, it fell into forgotten history until rediscovered in the early 19th century.

I was surprised at how commercial it was, from camel rides to cafes and tourist trinkets. But perhaps, I shouldn’t have been. Trade had been its business and it is once again. 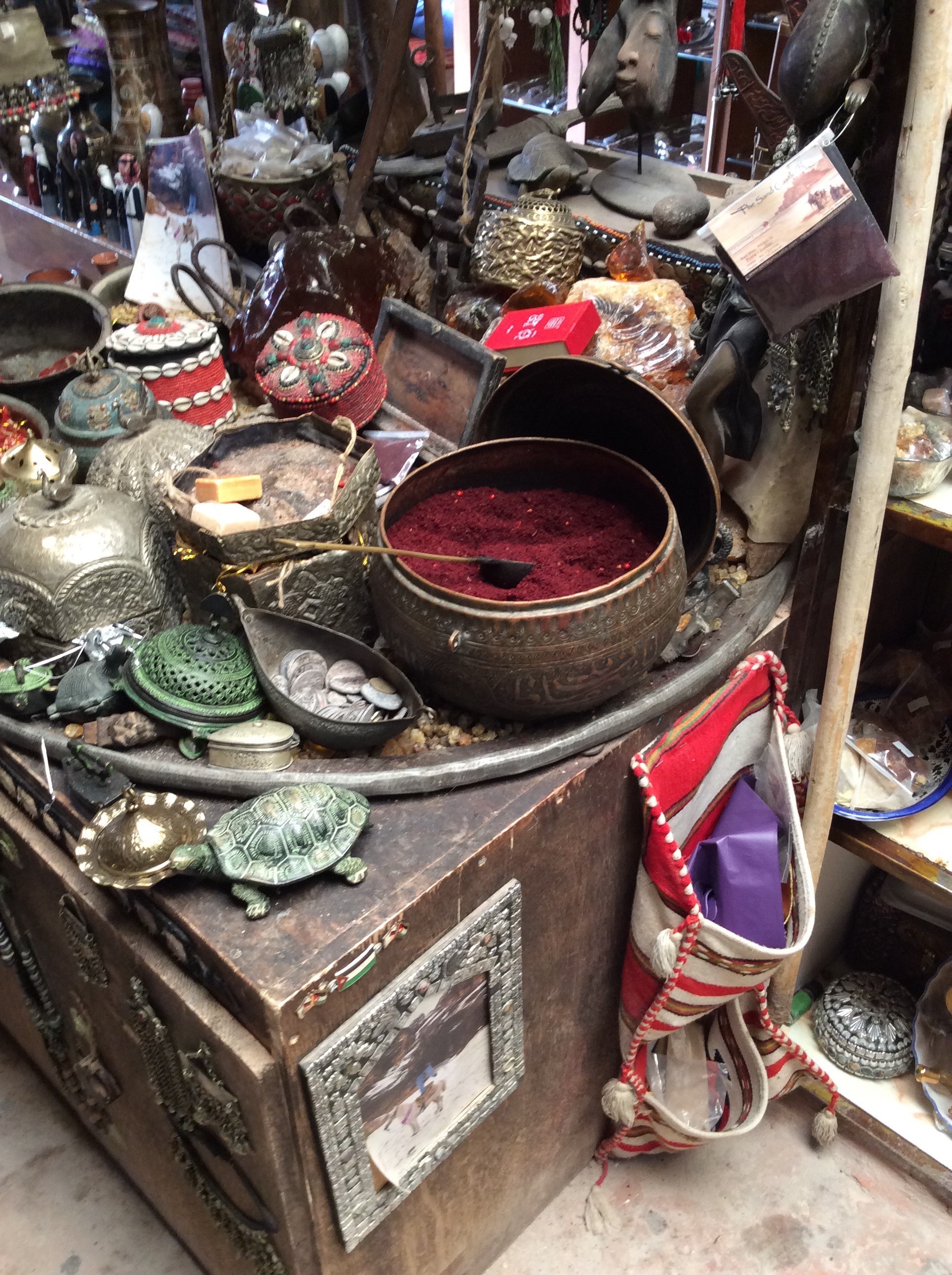 On the way back to the airport, we stopped and boarded old vehicles for a wild ride across the red sand of the Wadi Rum, where The Martian was filmed. We stopped in a Bedouin tent for tea and then it was back to the Mother Ship and one more stop.

Could it really be close to being over?

Marrakech, Morocco, one more of the stops I wasn’t too sure about. And, once again, I found myself liking it. 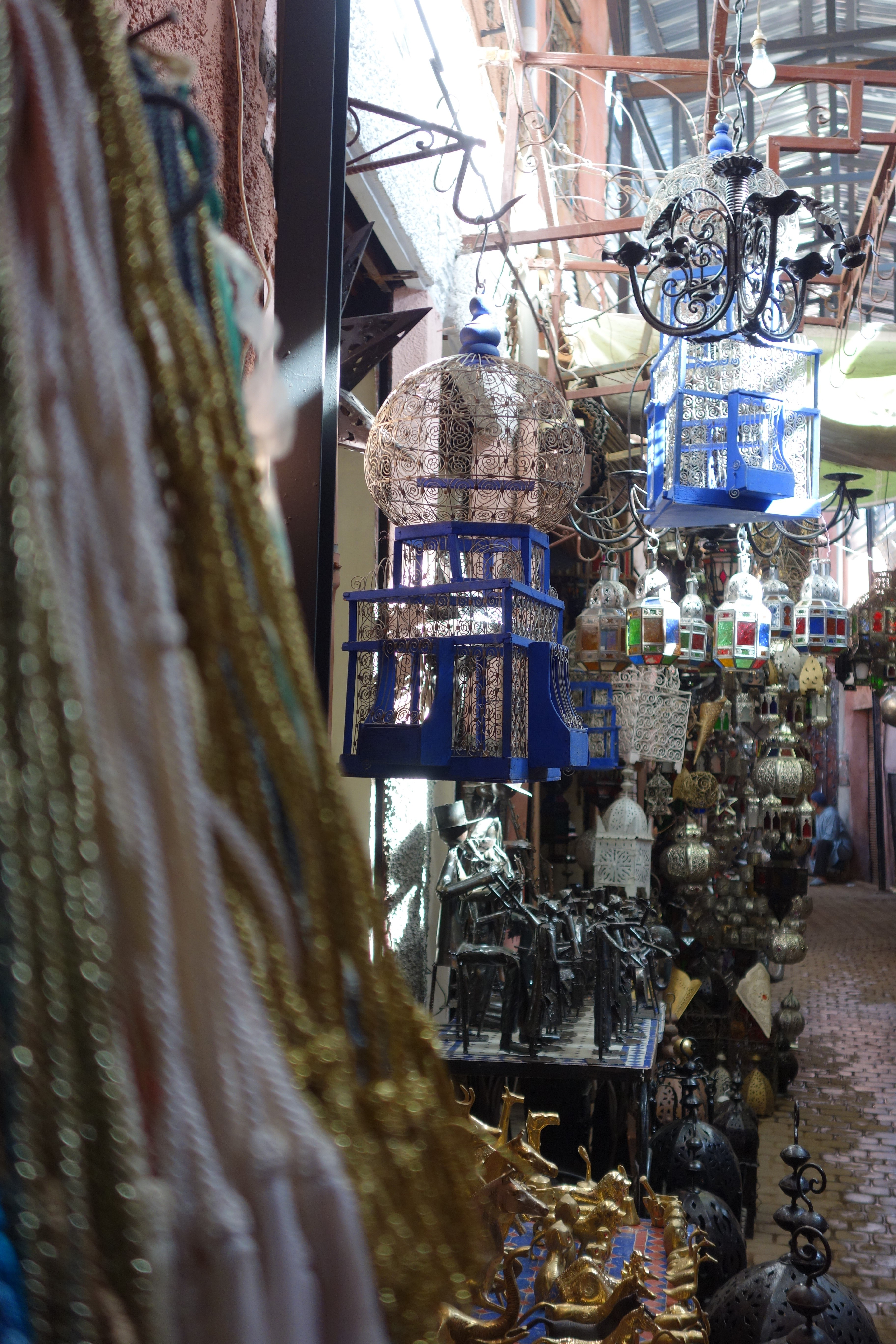 The entire medina, or market, is a World Heritage site. I wouldn’t even think about going there without an escort, its winding alleys seeming to twist and turn back upon themselves. The merchandise is varied, but sometimes looks the same. Haven’t I been down this aisle?

But before the souk, we visited the Bahia Palace, a large complex of rooms and gardens.  We could tour only a small portion of them. Built in the late 19th century, its architecture was just one jaw-dropping room after another. 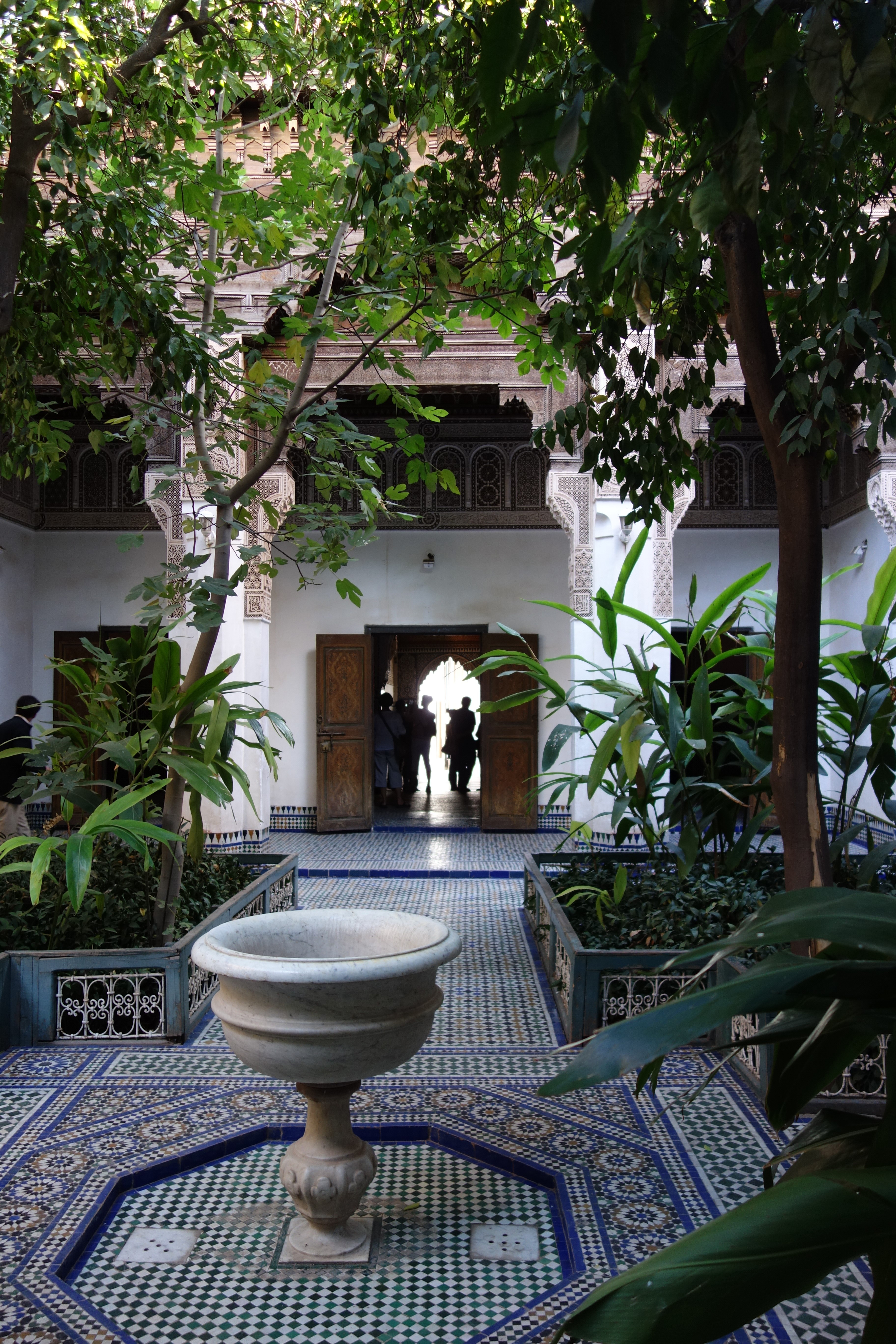 We had one more stop, the Azores, for a security check. Then we boarded the plane for the last time, farewell on our lips. We’d come to know each other, to depend on our wonderful staff and crew. We’d been spoiled beyond belief by flowers in the toilets with washcloths instead of paper towels. We’d shared photos and ideas about other adventures. It had been a wonderful, once-in-a-lifetime experience, but it was time for it to be over.

It had been, as I find all our world-adventuring to be, out of time. As if the rest of the world didn’t exist while we were gone from home. Of course, that’s not true, the world marched on and dragged us with it. But we’d been around the world, a dream realized. 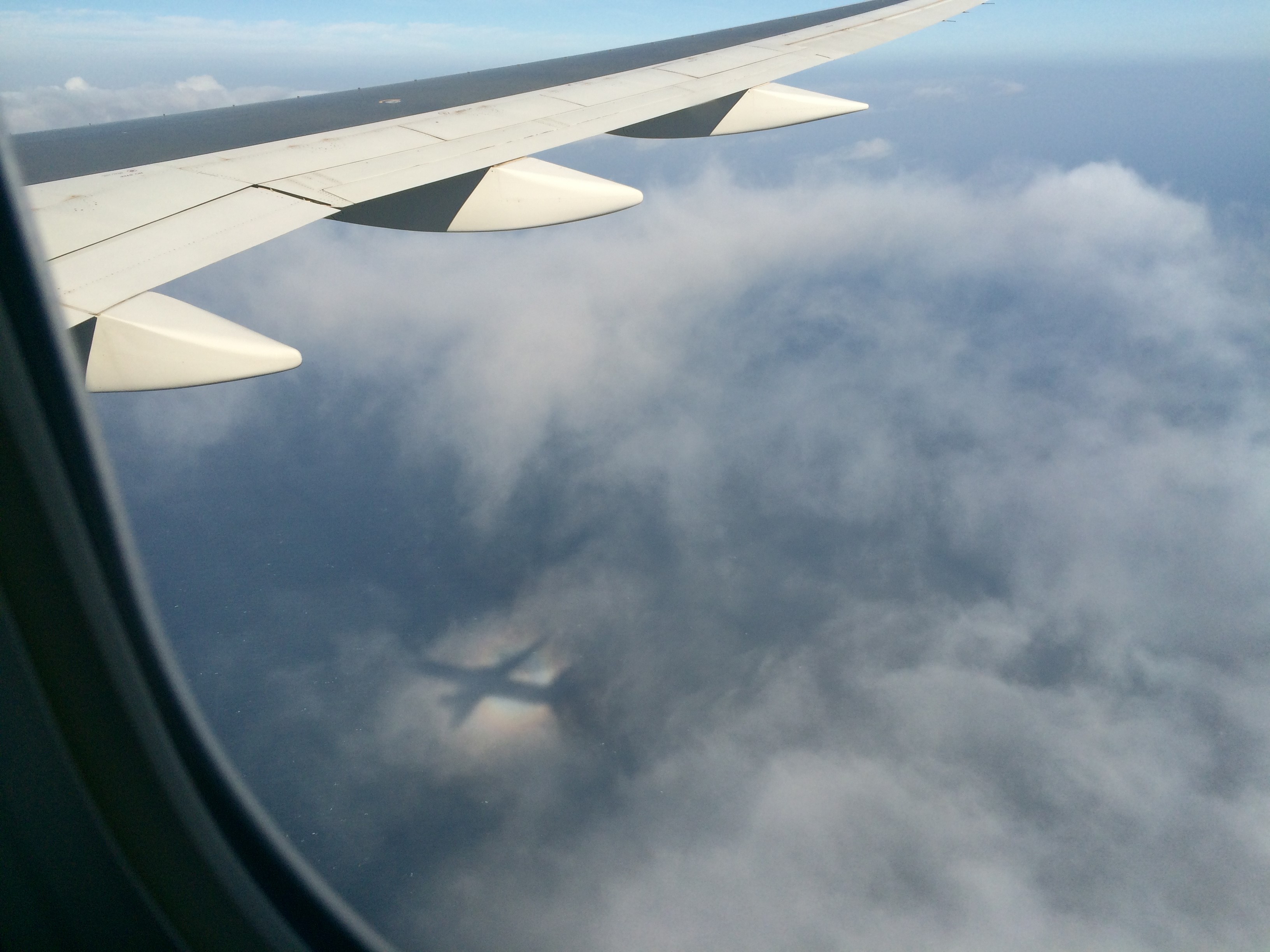 Our planes shadow as we leave Morocco and journey home. Credit: Kay Sisk.

To learn more, read Part I and Part II of this three-part series.