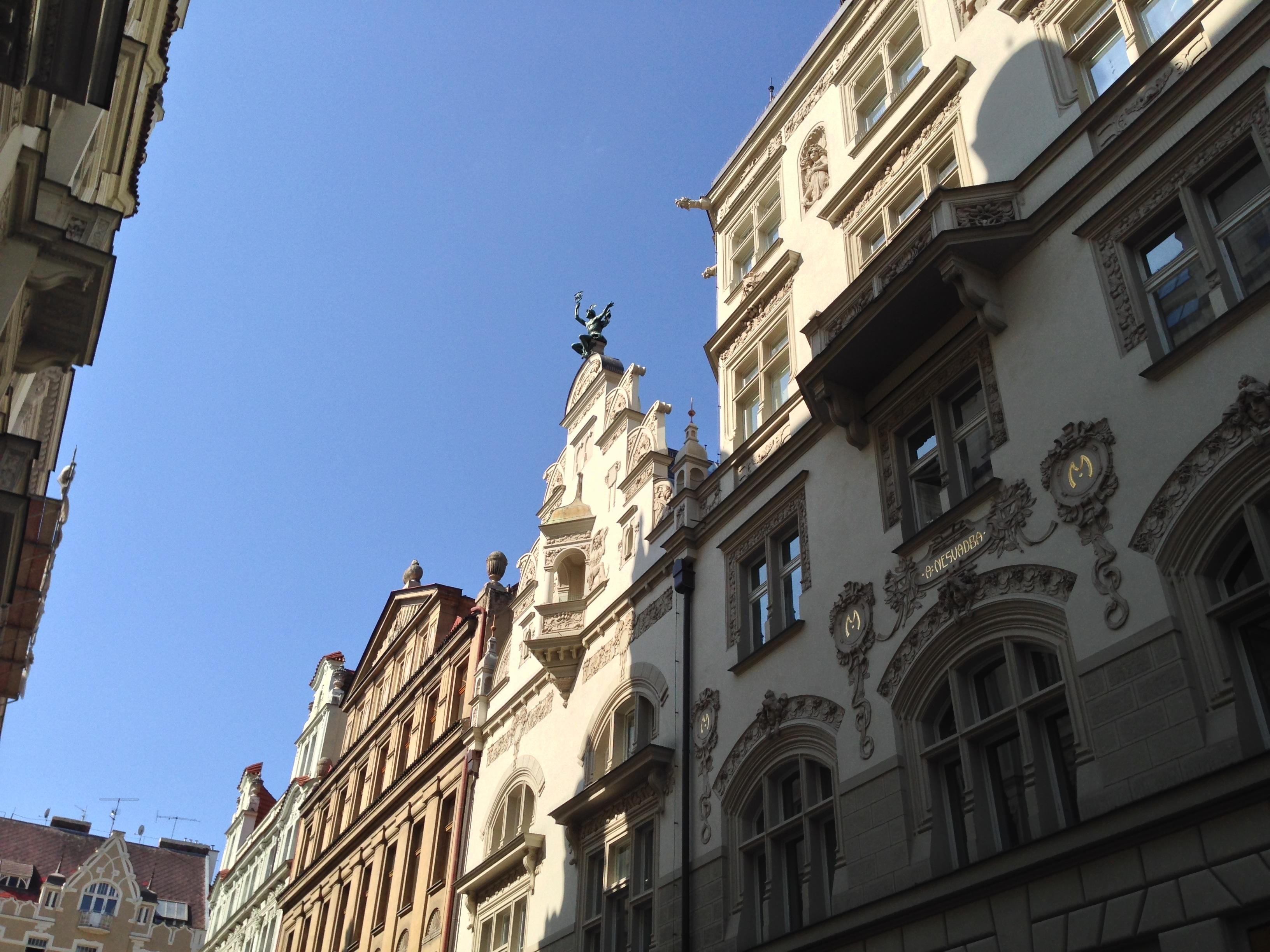 A favorite activity when I visit Prague is to walk through the neighborhood called Josefov, the former Jewish quarter with its historic synagogues and its remarkable Jewish cemetery.  The major boulevard in Josefov is Paris Street (Pařížská in Czech), a tree-lined avenue of expensive stores and restaurants, many housed on the ground floor of spectacular Art Nouveau buildings.  These were constructed at the beginning of the 20th century, and then were cleaned and restored to near their original beauty in the 1990s, after the end of the Cold War.

On my most recent stroll along Paris Street, I found myself gazing up at a stone bust of Mercury, the Roman god—helpfully identified by his name spelled out in German, "Merkur"—positioned over the corner entrance to a massive pale-yellow edifice done in Art Nouveau style.  The Central European variation of Art Nouveau goes by the name of Jugendstil, which literally translates as Youth Style.  I'm not usually one to take a lot of photographs while on the road, preferring a live-in-the-moment kind of tourism, where I stop and take it all in with my eyes before moving on.  But on that gloriously sunny September day, marveling at this Jugendstil gem in front of me, I had to take out my iPhone and snap a few photos.  I made sure to photograph the four names etched on the walls of the building above the second-floor windows—two along its Paris Street side, two more along the side street—which I assumed identified the building's architects. 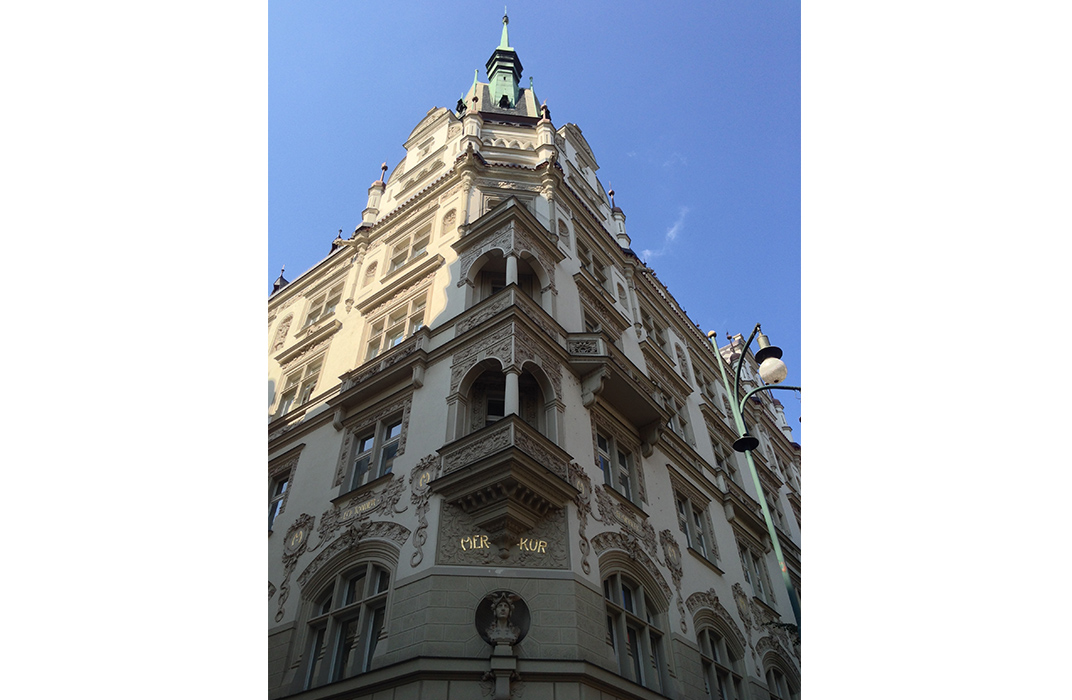 It was only when I walked a few steps down the side street that I happened to look up and catch sight of an elegant sculpture of Mercury, perched high above, his knees jutting out over the street.  He is unmistakably Mercury, the god of commerce (among other things), holding aloft his trademark staff: a rod entwined by two serpents and surmounted by a pair of wings (today it is a universal symbol for commerce).  And he is otherwise recognizable from his winged hat and shoes.  I could barely make out those latter two details from so far down below, and as I snapped away I found myself wishing that for once I was equipped with a powerful camera that would enable me to zoom in on the multi-winged figure.  How many people, I wondered, even lovers of Art Nouveau architecture who have stopped to admire the gorgeous facade of this building, happen to miss its signature statue?

The presence of this striking figure got me puzzling over the significance of the Mercury motif.  Why was the Roman god of commerce used as a symbol for this particular building?  When I got back to the hotel room, I did some sleuthing online.  I could find only a few tourist photos of the front of the building, and none at all of the emblematic Mercury sculpture.  I Googled the names of the four "architects" etched onto the facade, only one of which produced any results—but that was enough to clarify matters.  The names on the building are in fact not those of its architects, but rather of the founders of an organization called Mercury, the Society of Bohemian Merchants.  It was a guild established in the second half of the 19th century to enhance the authority of men of commerce in the Czech lands, Prague in particular, and to serve as a counterweight to the commercial interests in imperial Vienna.

The original headquarters of the Mercury society was located near Wenceslas Square, but this building on Paris Street served as a later, pre-World War I base of operations on what was at the time a fashionable commercial boulevard.  It remains fashionable today.  The ground floor of the Mercury building is home to a Gucci boutique—hardly a Bohemian brand name, but the god of commerce appears to approve.

Interested in learning more? Check out our tour of Old World Europe!