Strasbourg: The Emergence of an International City 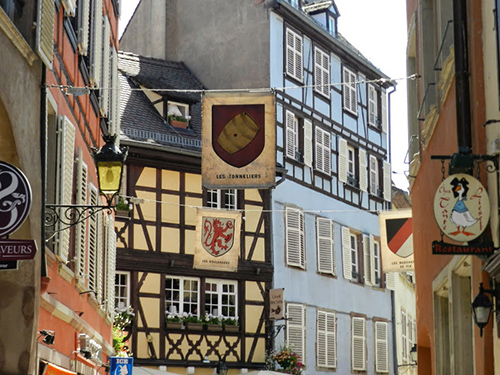 Throughout its long history -- beginning as a Celtic village and then a Roman garrison town, becoming a “free city” under the Germanic Holy Roman Empire, during the medieval period, eventually annexed to the kingdom of France by Louis XIV in 1681, seized by the newly created German empire in 1871, returned to France in 1918, and one last time (for four years) taken by Germany during the Second World War -- Strasbourg has been dominated by its mixed French and German heritage.  If this heritage was often a conflictual one, since the Second World War the city has been one of the leading champions of Franco-German harmony and a peaceful, cosmopolitan, and united Europe.  Consequently, the headquarters of many of the institutions of today’s European Union are housed in beautiful, modern buildings, paid for and offered to the European Union by the citizens of the city of Strasbourg.

After a scrumptious breakfast buffet on our cruise ship, the Amadeus Princess, the Smithsonian travelers took a bus from our docking place on the Rhine Canal to the city center of Strasbourg.  Along the way we passed by the European Parliament, the European Human Rights Court, and the Council of Europe, as well as having our first sighting of a stork, the symbol of Strasbourg, as we drove by the Orangerie Gardens, a large public park, designed in the 17th century by Le Notre, Louis XIV’s landscape architect, and dedicated to Napoleon’s wife, the Empress Josephine de Beauharnais in 1804. 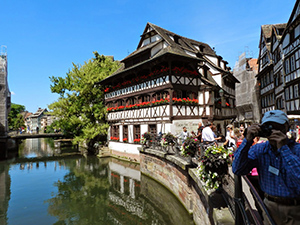 The bus driver dropped us off near the Covered Bridges, three towers that remain from the 13th-century fortifications of the town, from which we also viewed the Barrage Vauban, the dam and lock built by Louis XIV’s military architect, Vauban, to control the waters of the Ill River.  This was our entry point into perhaps the most beautiful, and certainly the most picturesque part of Strasbourg, La Petite France, where the largest number of old half-timbered houses are located and reflect beautifully into the canals that flow past them.  Perhaps the most famous of these is the impressive “Maison des tanneurs” (above, the house of the tanners), but many others were to be seen as we explored the narrow streets of this district.  Our charming local guide pointed out many artisanal products, including cloth, regional food and wine specialties that had been produced in this area in the past, and were still on display in the shops.  Particularly attractive and not to be resisted were the Kougelhopfs seen in a bakery window.

As we left La Petite France and began to see the tall spire of Strasbourg’s Notre-Dame Cathedral, we passed by the Place Gutenberg, dominated by a statue of Johannes Gutenberg, who created the first European moveable type printing press in Strasbourg in the mid-15th century, just about the same time that the cathedral’s spire was completed. 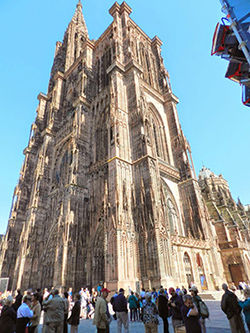 As one can see from the attached pictures, the Strasbourg cathedral is a beautiful example of Gothic architecture.  One also sees the power of France’s Sun King, Louis XIV, who insisted that an equine statue of him be added to the façade of the cathedral.  The German poet Goethe, who studied in Strasbourg University and whose statue stands nearby the university, said the cathedral was “composed of a thousand harmonizing details” and “like the most sublime, wide-spreading tree of God, proclaiming the glory of the Lord.” After seeing the cathedral, some of the travelers returned 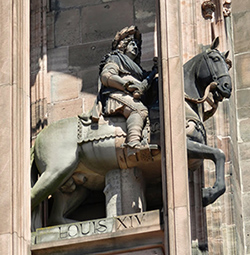 to the ship for lunch, while others stayed to visit longer.  After further exploration of small streets around the cathedral, one particularly attractive alternative to the return bus was a leisurely stroll along the River Ill.  Along the way, there were several reminders of the city’s evolution over time. The Hotel de Ville (City Hall) reminded us that it was the Mayor of Strasbourg, who during the French Revolution commissioned his friend Claude-Joseph Rouget de Lisle to write a stirring anthem for the Army of the Rhine that was soon to become La Marseillaise, the French national anthem.  As we walk along the Ill River, we see that one of the quais has been named to honor Rouget de Lisle, and we also admire some of the attractive university buildings that were constructed during the period of German rule in Strasbourg in the late nineteenth and early 20th century.

Soon we approach the complex of European Union buildings, as the Ill River heads for its junction with the Rhine outside of the city.  The below pictures show how dramatic some of the architecture is, and the name of a bridge that crosses the Ill offers further insight into the contemporary status of French-German relations.  The French have named this bridge in honor of The White Rose, an anti-Nazi resistance group of university students, whose leading members were murdered by the Nazis in 1943; and we are reminded that a strong French-German friendship is the ultimate cornerstone of today’s European Union.  Cutting through the Orangerie Gardens to find our ship at the Quai des Belges, we are delighted to see rich evidence of the thriving colony of storks about which our guide had spoken earlier in the day.  So, we climb aboard the gangway with a smile on our faces, in time for our late afternoon departure for new adventures further down the Rhine in Germany. 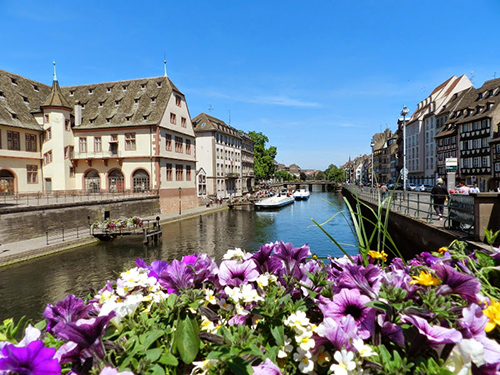 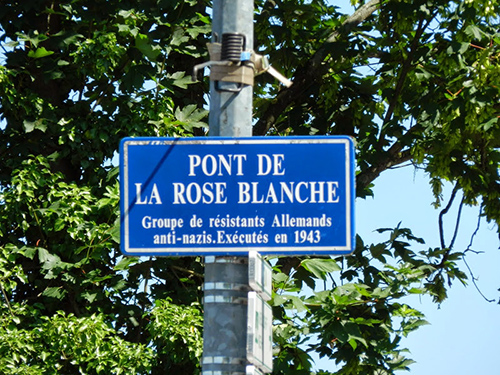