The trip from the ancient port of A Coruña to the Medieval city of Santiago de Compostela is a beautiful introduction to Galicia. The scant hour’s ride takes us past spring pastures freshened by the frequent showers so typical of this land. The sky is big and ever-changing, while the land is measured into smallish parcels, marked by low stone walls. Galicia is green, intimate, peaceful, reflective. 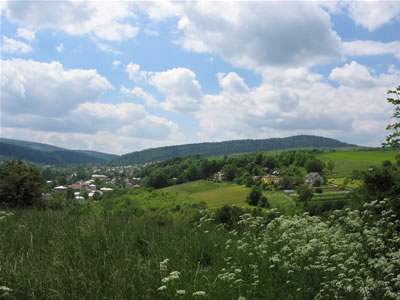 Occasionally, a roadside cross in the same gray granite marks the Camino, the Way to Santiago. Stone hórreos, where grain is stored above the fields, are likewise topped with crosses. For centuries, this green and rocky landscape has sustained families who farm, with a cow or two in the fields. Today, the vegetables and cheeses of Galicia are among the most unique and delicious in Spain. 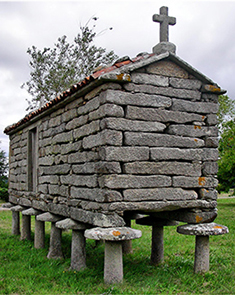 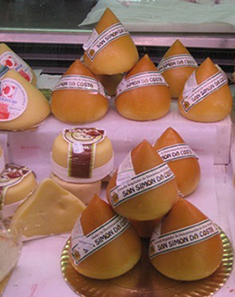 We are lucky and catch occasional glimpses of the small, sturdy horses native of the north. A Pottock, perhaps; maybe an Asturcón. These short, stocky breeds look more like ponies, but their diminutive stature belies the strength of their broad hindquarters and barrel chests. They roamed wild here among the earliest Iberian tribes, well adapted to the mountains and to hard work. In modern times, endangered by extinction, they are carefully bred for dressage and are especially prized for young equestrians. 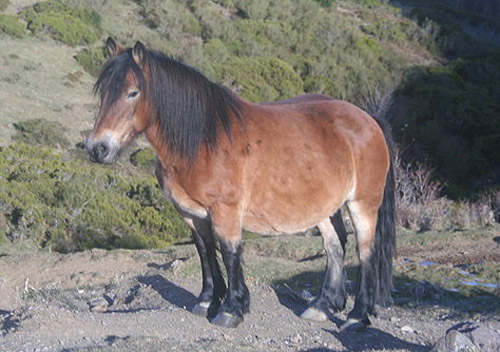 As we approach the town of Santiago de Compostela, we can just make out the magnificent bell towers of the cathedral, for centuries a beacon to thousands of pilgrims. Driving through the streets of Santiago we begin to see today’s pilgrims, some walking alone, others in groups. They stride purposefully ahead, slightly bent under the burden of their packs. How long have they been walking, and from where?

We leave the coach at a short walk from the center of the Medieval city. Along the cobblestone street, past ancient smaller churches and monasteries, the scent of fresh pasteries flavors the cool air. Local ladies emerge from small bakeries offering samples of their Tarta de Santiago, a rich almond cake dusted with powdered sugar marking the cross of the Order of Santiago. It is delicious. 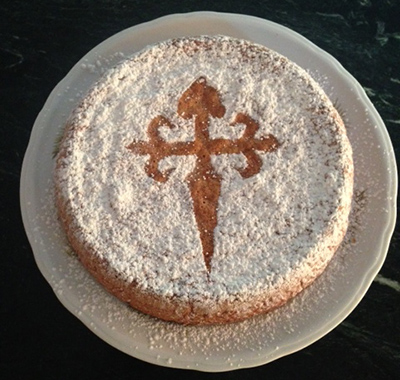 The cobbled street opens onto the main square, the Praza do Obradoiro. Although our trip here has been relatively short and easy, it is difficult not to feel the elation of standing in this place, before this magnificent cathedral, the goal of so many individual journeys. As our guide begins his excellent commentary, the unmistakable sound of a bagpipe drifts from a side portico. The sometimes lively, sometimes plaintive music comes from the gaita gallega, popular since at least the early Middle Ages in Galicia, and still a vibrant part of its culture.

As we walk slowly around the immense cathedral –each side special and beautiful—a sense of timelessness settles in. The beautifully carved statues on each façade narrate the faith, and in their humanness, quite literally seem to speak to us. Nothing prepares us, however, for the statues of the Pórtico de la Gloria, where St. James sits serenly smiling, as if welcoming us. On either side, he is accompanied by equally happy Apostles and others from the Old and New Testaments, whose exquisitely carved features bear faint traces of the lively colors they once bore.

Exiting by the south side, we see one of two official offices where pilgrims obtain their Compostela, a certificate of having completed at least the last 100 kilometers of the Camino on foot (200 by bicycle), which has been stamped daily along the way. I lag back to have a look, and at least three foot-pilgrims stride in, followed by a cyclist –all smiling broadly. It’s impossible not to smile with them.

After our visit to the cathedral, we wander back into the Praza do Obradoiro, named for the stone mason workshops that once filled the plaza. We head for the beautiful Hostal de los Reyes Católicos, built by Ferdinand and Isabel as a hospital for pilgrims. Today a luxory parador, the hotel still offers meals to a limited number of pilgrims. After admiring the beautiful plateresque façade –which indeed resembles silverwork in stone—we step in for a snack. In the comfortable lounge, the waiter confirms that pulpo a la feira is available. Another couple has beat us to it, and offers to share their ample ración. It is exactly as it is prepared in the feiras on festival days in Galicia. The very fresh octopus, quickly cooked and tender, has been dressed in a fruity Spanish olive oil and seasoned with pimentón de la Vera, a bright red smoky paprika unique to Spain. The spice is the perfect accent to the pure white pulpo, which tastes of the sea. 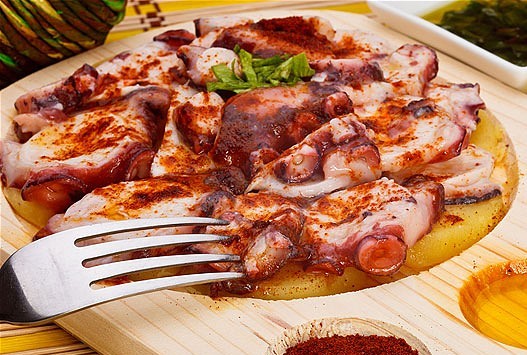 Too soon it is time to leave. But more than one of us has quietly promised ourselves to one day make this trek on our own.