The Summer Home of Storks - Falling in Love with Poland

Storks. They were quite a topic during our Fall 2013 Old World Europe tour. Particularly true in Poland, where the stork is an iconic figure. Twenty percent of the world’s population of storks—as many as 50,000—make Poland their summer home. And while storks migrate to Africa for the winter, they return to their massive nests when the weather warms.

Villages are proud of their storks, whose nests are tucked into all kinds of rooftop alcoves and built even atop chimneys. People see themselves sheltered from bad fortune by the presence of those nests. And the nests are astonishing: up to six feet wide, they can weigh over a thousand pounds. They are easy to spot.

And that’s what our Smithsonian Journeys’ guests did in our first days of travel across Poland (Warsaw to Krakow) and on the dazzling ride across the Carpathian Mountains to Budapest. It became a stork-nest spotting competition: “I’m up to four,” cried someone in the front of the bus. “Oh, that’s nothing: my husband has seen six nests so far.”

“Counting storks nests” won’t appear in the promotional material for Smithsonian Journeys, but it’s a perfect example of the delight that characterizes this terrific itinerary across Old World Europe. We spend a generous amount of time in some of Europe’s most significant cities: Vienna and Prague, of course—the two that draw many guests to join this tour; also, Budapest which entices those who’ve never been and many who have longed to return.

The big surprises on the Old World Europe tour, however, are Krakow and Warsaw. Often, we aren’t taught much about these cities, unless we have Polish ancestry.

Recalling the unspeakable destruction of Warsaw in the Second World War, our Smithsonian guests aren’t sure what to expect. They discover a vibrant city filled with the country’s best talent, dedicated to making careers in the new, post-Communist economy. They see a swirl of fashionable young Poles, proud of their ultra-clean business district and excellent public transportation. And they shake their heads in awe, strolling through a resurrected pristine Old Town that war had reduced to ruble.

Krakow is an even bigger surprise. It’s just about the perfect European city.  Small enough so that you can traverse the historic areas in an afternoon, Krakow teams with activity. Museums, cathedrals, towers, arcades, and picturesque alleys remind us that this city was one of few to escape large-scale destruction in Hitler’s time. The miraculous survival of much of the Jewish Quarter allows us a rare chance to imagine how vibrant Jewish life was, before the horrors of genocide tore Europe asunder.

In my experience as Study Leader for this itinerary, I enjoy watching people fall in love with Poland. I hear comments like “I didn’t expect to be so impressed by Warsaw” or  “I can’t wait to come back to Krakow—I had no idea how wonderful it was.”

After all, travel is about discovery and enjoyment. Partly that happens with the impressive architecture and breathtaking scenery. But it happens, too, in the little moments: standing beneath St. Mary’s Tower in Krakow Square as, twenty-four times on the hour, a lone trumpeter serenades Krakow with the plaintive fanfare Hajnal. Or it happens when we breathe the fragrant air of the Łazienki gardens, realizing what a garden paradise Warsaw must have been before its destruction in World War II.

And it definitely happens as we look for stork nests! Ancient legend comes alive in the brave and loyal stork. Art, too, abounds in storks, as in this beloved painting by Józef Chełmoński entitled Storks (Bociany). 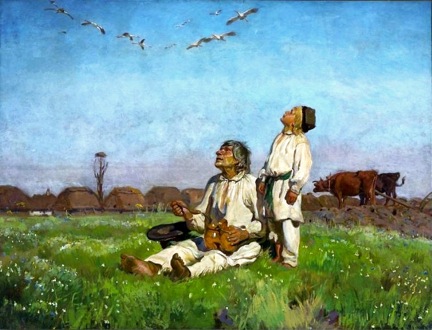 The Old World Europe tour is filled with generous blocks of free time in every city. So when you join us, walk just a few blocks from our hotel in Warsaw to the National Gallery. In its spacious galleries, expect to be captivated by storks and an array of dazzling images as you begin your journey into Eastern Europe’s beguiling history and tradition.