Most of us had stayed up almost to midnight aboard the Victoria Anna to experience the thrill of passing the first of five locks that would take us through the Three Gorges Dam, the largest water control project in the world. This morning, under a mimi (“light mist”) rain, we were at the dam itself to admire its awesome twenty-six hydropower generators and scenic beauty. But first I had to hunt down something more important, a supply of the newly harvested green tea from the verdant mountains framing both sides of the upper reaches of the mighty Yangzi River. Known by Chinese tea connoisseurs as Ming Qian or “pre-Qingming” tea that is harvested before the Qingming Festival that usually falls sometime around the fifth of April, this first-growth tea has grown on me ever since I first sampled it at the Yichang Airport enroute to Shanghai three years ago. Green tea picked after Qingming is considered by tea people as less desirable because its essence gets washed out by the rains that come with the start of the monsoon season in the Yangtze region. 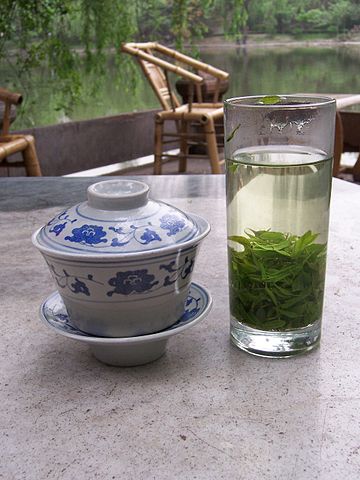 Like all Chinese green teas, Three Gorges green tea is processed by lightly tossing or steaming in a wok over hot flames shortly after picking to stop the natural oxidation process. This ensures that the tea will retain a high concentration of vitamin C, amino acids, and catechins—the antioxidant that gobbles up free radicals that damage body cells and contribute to cancer, blood clots, and blocked arteries. When seeped (at 80 to 85 degrees centigrade, please!), the tea reveals a beautiful yellow-green color and has a grassy taste with overtones of freshly roasted ginkgo nuts. I drink coffee to jump-start my system and get going in the morning.  When I need to calm or clear my mind for serious thinking or writing, I always turn to leaf green tea. This is something known to Chan (Zen in Japanese) monks who regularly undergo long bouts of meditation.

Along with a fellow Smithsonian traveler, a retired mid-wife who proclaimed green tea one of the most potent antioxidants around, I was very happy to find Three Gorges green tea that was harvested just a few weeks ago in a shop close to the dam.

To learn more about our Imperial China and the Yangtze tour, click here.