Five Animals to Look for on Safari (Besides the Big Five)

When on safari, the "Big Five" are on the top of everyone's list of animals to see, and it is true that lions, leopards, buffalo, elephants and rhinos are extraordinary creatures to observe in the wild. Seeing a majestic elephant bathe itself in mud or a lion greeting its pride is a magical moment that will make any journey into the bush unforgettable.

Yet, there are so many animals to see, many equally as exciting or unique as any of the Big Five, that you may be surprised to find yourself at the end of your safari with a new and unexpected favorite. With that in mind, here are five more animals to look out for while on your game drives. 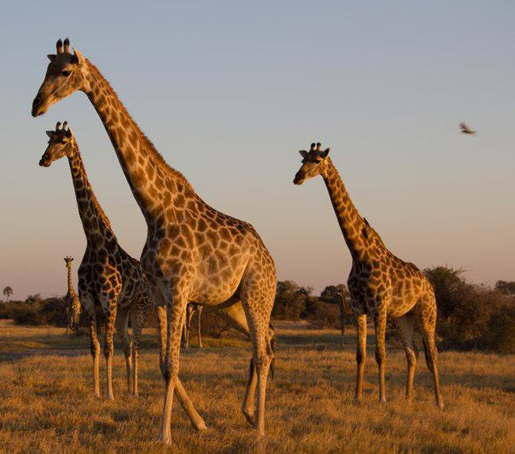 Two animals to reevaluate and pay more attention to on a safari are the hyena and the giraffe. Giraffes are simply regal. Watching them walk across the savannah as the sun sets is like taking a deep breath during yoga; it centers, calms and keeps you present. Giraffes are most closely related to the camel (you can see the resemblance if you look closely at their faces) and are among the only animals that walk by moving both legs on one side of their bodies at the same time. In order to drink water, giraffes must spread their front legs very far apart (like they are attempting to do the splits) to get their faces close enough to the water.

Hyenas may seem like an odd animal to highlight. In fact the majority of people claim to dislike hyenas (perhaps because of their poor casting in Disney’s The Lion King!) In reality, these inquisitive creatures are fascinating to watch, especially when their young come up to your vehicle and start sniffing and chewing on the tires. Don't worry, they aren't trying to give you a flat tire; rather, this is how they experience and learn about the world. If you knew everything about your house, and then someone came and parked a car on your front lawn, you would probably go investigate it too. Hyenas are immensely playful animals and among the most social species. You may see the young scuffle around their den, but they are quick to stand at attention if their mother calls, as the Spotted Hyena is a female-dominated species. Hyenas are generally thought to be scavengers, and while they are indeed opportunistic animals and wouldn't pass up trying to steal a good meal from another species, they kill as much as 95% of the food they eat. After making the kill hyenas often make a laughing sound, to signal the rest of their family members that "dinner is ready." However, this call may also bring in "unwanted" dinner guests, such as lions, to the table. 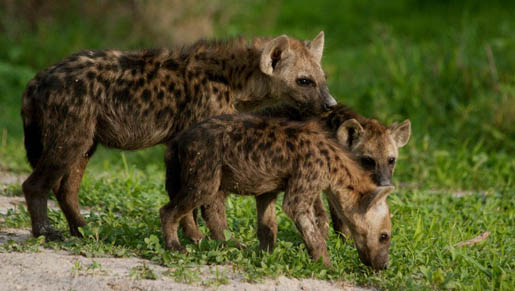 Be sure to be on the look out for the Red Lechwe. If you mention wanting to see one to a guide, you might get a surprised look, but this will be because they are in fact quite common. Part of the antelope species, they stand out due to their hind legs. Lechwe, which eat aquatic plants, are found in marshy areas and have evolved to use the knee-deep water as protection from predators. Their hind legs are considerably larger than their front legs and all four are covered in a water-repellant substance which allows them to run quite fast in knee-deep water. This, more often than not, keeps them safe from land-dwelling predators, such as lions and leopards (although crocodiles still have the upper hand). Seeing them run through a flood plain is a wonderful photo-op, so make sure to have your cameras ready. 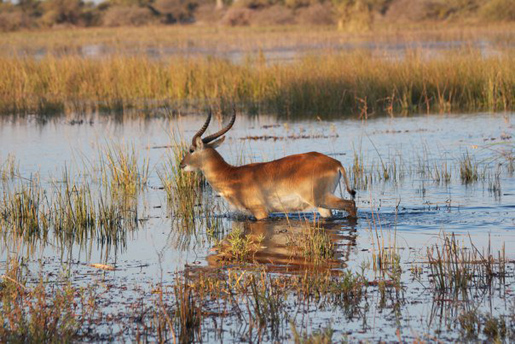 And don't overlook the smaller animals out there. Crimson-breasted shrikes are small but striking birds with a white wing stripe and florescent red underbellies. They have a distinctive chirp, which will alert you that they're near, but it’s the bright red in a land of browns and tans that will catch your eye. Look for them in drier thorn-bush areas, thickets and acacia scrubs. 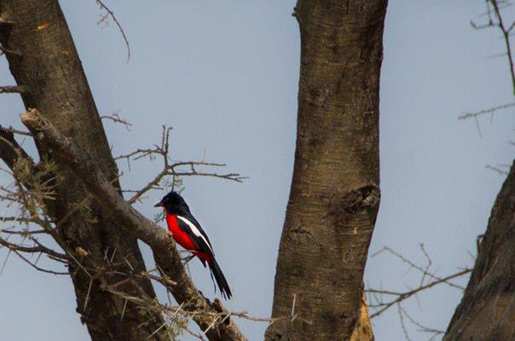 Chameleons are small and fast, but not as hard to spot as you might think, particularly at night. Their ability to change color is well known, but this is not done to match their background as commonly believed. Rather the color changes are used both to communicate and to regulate body temperature. When you come back from a game drive after dark, it can be hard to carry on looking for the bigger animals because all you have to locate them with is the reflective color of their eyes. Chameleons, which you would think would be infinitely harder to find, actually reflect light with their entire body! When a spotlight hits them, their whole body is the color of pearl, for the first couple of moments at least. This occurs because chameleons have multiple layers of chromatophores, the top layer has red or yellow pigments and the bottom layers have blue or white pigment. At night the chameleon shrinks these cells to preserve heat, which makes the blue and white cells more prevalent, and easier to catch in a spot light. You are most likely to see them in trees or bushes where they hope to spend a safe night hidden from predators. They vary greatly in length - from 2.5 cm to 50 cm - so be sure to keep your eyes peeled and get ready to impress your whole group by spotting a chameleon, at night, while driving 30 mph. Just don't expect to get a picture of this phenomenon; it probably won't come out very well!

Come experience the African wild with us! Learn more about our African Safari trip here.