Fire and Ice in Iceland

Iceland has been called "the land of fire and ice," a rather accurate short description of this unique country.  Iceland is only slightly smaller in surface area than the US state of Kentucky, yet it is one of the youngest (geologically speaking) nations in the world (the oldest exposed rocks are only about 16 million years old), and portions of the island are growing even as you read this. The historically significant Althing (the oldest and longest running parliament in the world) was first held at Thingvellir, within a linear depression that is the still-growing boundary between the North American (to the west) and Eurasian (to the east) plates. The two plates are separating at the stately pace of 2 to 3 centimeters (about an inch) per year, roughly the same rate as the growth of human fingernails; while not observable to the watching eye, evidence of the accumulated separation is apparent on a human timescale, where appropriately fixed markers were established on the two sides of a spreading rift.  It is this motion of the planetary plates, coupled with Iceland’s location above a deep-seated hot spot, that generates the "fire" component of the country. 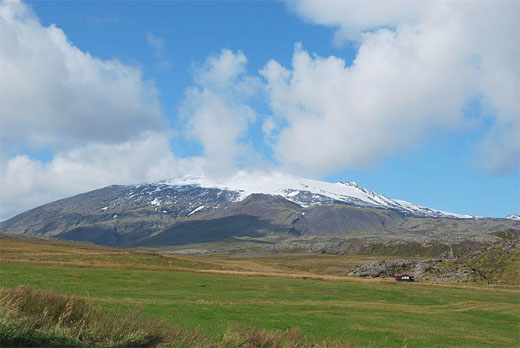 The Snaefellsjökull volcano from Hellnar. (Photo courtesy of wikimedia commons.)

We visited several locations throughout Iceland that typify the "born of fire" aspect of its natural history. One day we circumnavigated the huge Snaefellsjokull volcano, site of the beginning for Jules Verne’s classic "Journey to the Center of the Earth," while learning what the rocks can teach us from world-renowned Icelandic volcanologist Haraldur Sigurdsson. No day passed without seeing countless moss-covered lava flows and massive cliff faces composed entirely of volcanic rocks. Near the Krafla volcano, we walked on a trail through the boiling pools and still-steaming rocks at the vent for the 1984 eruption, the last of a decade-long series of eruptions. Throughout the country, hot rocks at depth heat groundwater that boils up out of the ground, as in the sudden bursts of the geyser Strokkur (adjacent to "Geysir," the namesake of all geysers); geothermally heated water supplies the hot water needs of virtually the entire nation. In southern Iceland we stopped at a farm next to the base of the Eyjafjallajokull volcano, which suddenly reawakened in 2010 (to the great consternation of air travelers throughout Europe); the farmer feared that a prolonged eruption would destroy his farm and livelihood, so with typical Icelandic foresight, he hired a videographer to document what was happening to the farm, resulting in one of the most personal and poignant  films I have seen (he is doing a reasonable business showing the film to tourists in a remodeled blacksmith shop next to the Ring Road highway). Icelanders have learned to live with nature’s uncertainties, roll with the punches, and turn what could have been a disaster into a useful (and even profitable) enterprise. 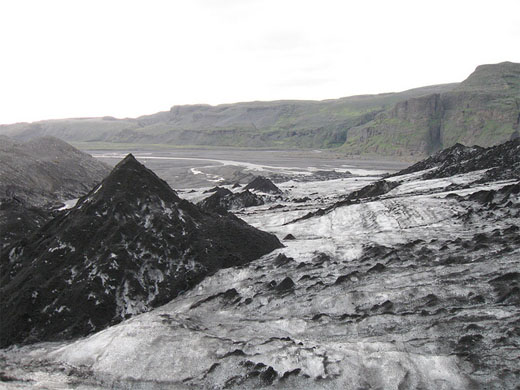 On top of the volcanic bedrock of Iceland are several large ice caps (including the largest ice cap in Europe), plus numerous smaller ice accumulations on individual mountains. These thick ice deposits feed dozens of glaciers that have carved the bedrock into U-shaped valleys. Our group walked up onto the very snout of the Solheimajokull glacier, where the ablating ice leaves a coating of dark rocks brought down the valley by the moving ice. The place where we reached the glacier terminus is easily a kilometer (more than half a mile) further up the valley than when I visited this same glacier in 2000; Icelanders have a ‘ring-side seat’ to the drastic reduction in glaciers currently underway across the planet. How many years will it be before Iceland no longer has a surface accumulation of ice, which is part of its very name? The remarkable sights and sounds of this beautiful but complex country tend to make one become reflective, and perhaps this may be a partial explanation for why the exploits of Vikings were recorded in the Icelandic sagas, among the oldest examples of European literature.  Come and find out for yourself what this country will teach you.