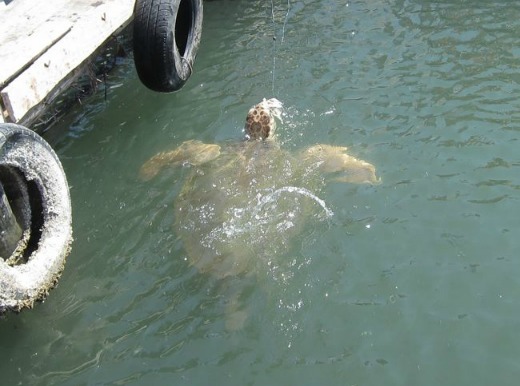 A loggerhead turtle gets a morning meal. (Photo by author.)

Visits to Turkey always include astonishing cultural treasures, impressive archaeological sites, extraordinary landscapes, delectable meals, and friendly people. But loggerhead turtles? I hadn’t expected them. But there they were, four of them the morning we visited, getting a morning meal as we watched from the flat bottomed boat that had brought us down through the marshes from Dalyon to the platforms of the blue crab fisherman who share some of their catch with the local turtles to the delight of visitors.

Dalyon, in the Mugla province of southwestern Turkey, is named for the fishing weirs that guarantee a steady supply of bass, mullet, and sea bream to local markets. It’s a comfortable little town with a big statue of sea turtles in the main square and a beautiful park running along the Dalyan Cayi, the small river that flows down through the marshes to the sea. In ancient times, this river was known as the Calbys and marked the boundary between the ancient kingdoms of Lycia and Caria.

On a day trip from our four day cruise on gulets in the Bay of Fethiye, our group arrived at the Dalyan riverside to the sight of a flotilla of gaily decorated and Turkish-carpeted flat bottomed boats, waiting to take groups of visitors on a tour of the local marshes. Our boat passed alluring riverside cafes on the way to our first photo-stop, a cliff with imposing rock-cut tombs. Our boat then wound past the beautiful ruins of the ancient seaport of Kaunos. As we neared the mouth of the river, our boat passed through a gate in one of the fishing weirs (lowered for passing boats by an attendant) and emerged into an open lagoon in the lee of the barrier island. This island, Iztuzu Beach, serves both as protected nesting area and as an award-winning eco-friendly beach. The island is home to a research, rescue, and rehabilitation center that studies the loggerhead (Caretta caretta) and cares for injured turtles from the entire coast region.

The founding of this protected area is a heartening story of the victory of conservation over what had been minimally controlled development along this coast. In 1986, when plans for a resort hotel complex on Iztuzu Beach surfaced, the international outcry together with the request of Prince Phillip, Duke of Edinburgh, who was then President of the World Wildlife Fund, resulted not only in the suspension of the hotel project, but in the prohibition of construction and the establishment of a Special Environmental Protection Area (SEPA) covering 461 square meters in the region. This was the first protected area of its kind in Turkey, and it has since been joined by 13 other such protected areas. The wider Köyceğiz-Dalyan SEPA provides safe haven not only for loggerhead turtles but for, among others, the Nile turtle, a variety of herons and egrets, the European glass lizard, the rock nuthatch, the blue rock-thrush, the European roller, the Eurasian reed warbler, and sections of Turkish sweetgum and pine forests.

That day in the marshes was a bounty for the senses as we gazed at the enormous loggerheads gliding around our boat, breathed in the fragrance of the salt marsh, and listened to the wind in the reeds and the roar of the ocean beyond the narrow strip of sand. 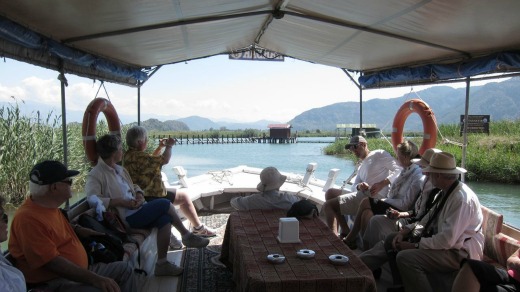 Life in the marshes. At the fishing weirs in Dalyon. (Photo by author.)