An Irish Journey From Galway to Killarney 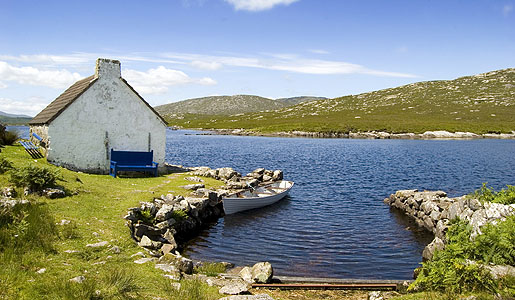 The beautiful landscape of Connemara.

As our Smithsonian group left Galway, I was struck again by the stunning contrasts of the Irish landscape. There are many types of beauty here, from the wild hills of Connemara which we saw yesterday to the elegant lake and parkland awaiting us in Killarney. We stopped briefly this morning at Dunguaire castle, which stands like a chess piece on the edge of Galway Bay. It was originally the fortress of a seventh-century king of Connacht, one who was among “the warriors of Erin” buried at Clonmacnoise.

Rebuilt in the sixteenth century, Dunguaire later served as a meeting place for the leading lights of the Irish literary renaissance. In the early morning mist, it was easy to imagine William Butler Yeats, Lady Gregory and John Synge passing underneath the grey stone archway, a romantic setting for the Celtic Revival.

The landscape emptied as we headed south into County Clare, lovely still but growing desolate. A famine wall snaked up a mountain and disappeared down the other side.  Through famine and eviction, the population of Country Clare plunged from 286,000 in 1841 to 104,000 in 1911. The hills through which we drove looked abandoned against the sullen sky. On their slopes, we could see the vertical scars that mark abandoned potato fields.

The ground grew stony as we approached the Burren, a name that literally means “a rocky place.” A different kind of beauty met us there, an eerie moonscape of eroded limestone. Cromwell’s surveyors famously reported that the Burren lacked enough water to drown a man, tree to hang him, or soil to bury him. But a microclimate mix of plants flourishes in this karst environment. They are strange neighbors -- alpine, arctic and Mediterranean types combined with native species. But even stranger are the megalithic monuments that guard this landscape, “millenia deep in their own unmoving” as the Irish poet Seamus Heaney put it.

“Why here?” someone asked quietly as we walked across the craggy pavements to the Poulnabrone dolmen, one of the most striking of these structures. Its twelve foot capstone balanced carefully on the portal stones, Poulnabrone preserved the bones of some twenty people spanning five centuries, five thousand years ago. Today, it looks like a giant’s table, having lost the mound that once covered it, one of ninety megalithic tombs in the area. The question was repeated in expanded form, a little impatiently: “Why would people build monuments like this in such a barren place?”

The answer: it was not always like this. When the farmers arrived 6,000 years ago, pine and hazel woodland covered this land, and the growing season was long. Fire, axe and hoof cleared the trees and turf; without its cover, the soil slipped away with wind and rain, exposing the limestone skeleton. Ancient pollen attests these changes occurred gradually, and only recently -- since the first millenium A.D. -- was the bedrock laid bare. Like the once fertile land of Inismor which we also visited, where Aran farmers in recent times made soil out of sand and seaweed, the Burren is in large part a man-made landscape and a cautionary one as well.

Continuing south, we stopped next at the Cliffs of Moher, which drop vertically seven hundred feet into the Atlantic Ocean and inspire a different kind of awe. The new interpretive center offered a wealth of information about the geology, history and wildlife of the Cliffs, but nothing can compare with the sensation of being physically there, overlooking the Atlantic Edge. As we continued to Killarney later that day, the countryside grew softer and more gentle. A ferry ride across the Shannon River invited thoughts of Vikings traveling up those waters a thousand years ago, but the scene was peaceful and bucolic, all blues and greens and greys. We passed Saint Mary’s Cathedral on our way into Killarney, a lovely Gothic cathedral built in the nineteenth century. Even in this cheerful town, the hard times are remembered: a giant redwood tree in front of the church marks a mass grave of famine victims. After such a day of stark drama, the warmth and friendliness of the pub are welcome, but my thoughts this evening keep returning to the melancholy beauty of County Clare and the mystery of the Burren.

Packed yet? Click here to see our tours to Ireland or here for Cassandra's next tour.