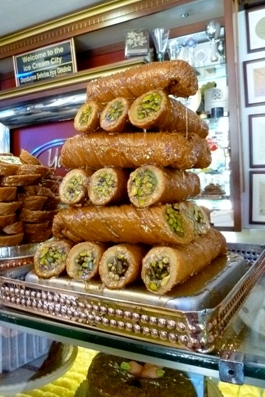 Even though I’m a professor of ancient history, I found contemporary Turkish culture and society as captivating as the famous monuments and museums we visited on this trip. At its best, travel will lead to unexpected experiences and observations; new environments will draw your attention to unfamiliar aspects of ordinary, daily life.

For instance, everywhere we went, members of our group noticed the flowers. Even though we knew they must be unremarkable to the people who live there, the roadside flowers and trees were interesting to us, especially the red poppies and the flowering pomegranate trees (I had never seen a pomegranate tree before this trip, or a pistachio tree for that matter).

In the street market in Gaziantep, a few of us became fascinated with the dried vegetables hanging in bunches from the awnings. I’m sure most people there would never notice them unless they were shopping for dried vegetables, but to us, their colors and shapes were oddly captivating.

Another interesting thing that can happen while traveling is that you might begin to adopt certain local customs and tastes. That happened on this trip in a few different ways. When we stopped at gas stations for breaks during our bus rides between cities, I liked the fact that we stood outside drinking little glasses of hot tea like the Turkish workers and travelers. We also quickly became connoisseurs of the Turkish cookies, nuts and candy for sale at the gas stations. It became entirely normal for me to always have a bag of hazelnuts in my purse, ready to share them with anyone at any moment.

I also enjoyed striking up conversations with people along the way, using my limited knowledge of Turkish. Especially in Gaziantep, Sanliurfa and Adiyaman, tourists were relatively uncommon and so the locals were interested in learning about where we were from and where we were going. Despite my grammatical limitations, they were patient while I tried to understand and answer questions. 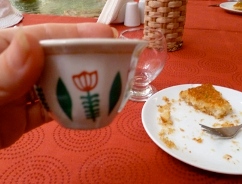 A spontaneous interaction between part of our group and a family in Cappadocia confirmed everything we had ever heard about Turkish hospitality. Six of us had stopped for an optional visit to a local winery, and we were walking down a small road to meet the bus for the next outing on the itinerary. As we passed by, a family called out to us from their front yard. They had a small fire going, with a metal plate over it that they used for cooking flat bread. A couple of women were preparing food while the other adults and children sat in some shade and talked. They were asking us to stop and share some of their food. We were going to have dinner soon, so we didn’t need anything to eat (and we were all eating more than enough on the trip!), but we wanted to be polite, so we stopped.

Being polite can be really advantageous. This family gave us the most amazing food: fresh, hot flat breads, one filled with cheese with parsley and the other with minced meat with mint. They gave us more than we needed, but we didn’t complain. It was really the best food of the entire trip, which is saying a lot. They invited us to stay for tea, and we would have loved to, but we had to meet our bus. We said thank you and goodbye, and when we returned to the bus and the rest of the group, we immediately told everyone about this wonderful family and their amazing food that they had shared with us. It was so astonishing to realize that both their kindness and their food would be considered completely ordinary in Turkey.

Packed yet? Click to learn more about traveling to Turkey with Smithsonian Journeys.

What did you learn from the locals last time you traveled? Share your story.