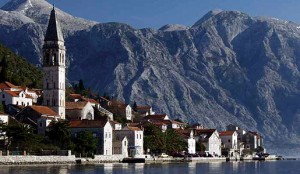 Entering the intricate array of fjords and bays that lead to Kotor invited me to go back several centuries in Balkan and Italian history. Back then, Kotor was called Cattaro, a Venetian outpost among a string of fortified ports that ran down the Adriatic’s eastern shore all the way to the southern tip of Greece and the islands of Crete, Cyprus, and the Aegean beyond. The Venetian Republic had many rivals along this stretch of coast. As we entered the bay, I could see off the port side the fortress atop the Prevlaka Peninsula that had been built centuries ago to mark the southernmost reach of the competing Republic of Ragusa (which is better known today as Dubrovnik).

Even now, the peninsula remains a bone of contention, since it is now held by Croatia, which can easily block Montenegrin ships using the bay from venturing into the Mediterranean. With a native pilot to guide us to Kotor, we passed the fortress, immediately entering a stretch of today’s Montenegro that was long ruled by the Venetians’ Ottoman enemies, who constantly pressed coastal outposts like Kotor. Today it is marked by the seaside resort of Herceg-Novi, which Ragusa gave to Ottoman-held Bosnia-Hercegovina just so they wouldn't have to share a border with the hated Venetians! As we made our way past looming mountains on both shores, we sailed through two more bays, admiring the hillside towns and places of worship – Catholic and Orthodox churches, as well as the occasional mosque -- which marked the divided dominion of the bay’s jostling neighbors. 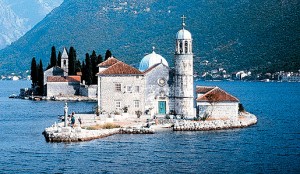 Our Lady of the Rocks, Bay of Kotor, Montenegro

Two hours later our pilot could finally point out Kotor itself, nestled at the foot of the rugged, half-forested Mount Lovčen. In all my travels, the sight stands out among three or four that have always inspired a sense of awe. At daybreak the view can be shrouded in a heavy mist that takes you back centuries, inviting images from a Gothic thriller, a lurid tale of vampires and werewolves, or as I once observed of a gypsy family with their wagon at the water’s edge ready to market their wares. As we moved in closer we could make out the incredibly long city walls snaking up to the mountain top, which historically marked the edge of the fiercely independent state of Montenegro. Yes, the Venetians needed these walls to climb up the mountain, lest the Montenegrin clansmen above steal their livestock, kidnap their townfolk for ransom, or rain down fire on the town itself.

If you'd like to explore Kotor with Smithsonian Journeys, these itineraries visit it.