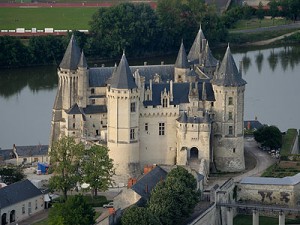 Saumur was a wonderful place to stay while we explored the Loire Valley. Photo: MDLF/R-Cast

After visiting the Hotel Anne d’Anjou’s breakfast buffet, having eaten perhaps one too many pain au chocolat, we start the day by following our guide, Laurent, on an interesting walking tour around the old section of Saumur. Laurent continues his efforts to help us “read” the history  of French cities by noting places where traces of doors or windows marked the walls, now bricked over by later construction with newer stone, and indicating traces of the medieval city wall that had been replaced in some locations by boulevards or main streets in the town. He explained how the very soft limestone of the Loire Valley region, known as tuffeau, hardens once it has been cut, and provides a beautiful white color to buildings from the famous chateaux of the region to the caves that keep mushrooms and wine at a constant temperature, and will even provide the setting for a wonderful little restaurant where we will enjoy lunch later on the trip.

At the end of our walking tour we arrive at a small distillery named Combier after the inventor of Triple Sec, where we enjoy a tour of the facilities led by one of the 12 full time members of the staff who produce an array of liqueurs made by hand from the fruits of the region, exactly as they have been produced since the founding of the distillery in 1834. This visit is “topped off” by the degustation (tasting) of some of the company’s best products. We walk back from this experience looking for a leisurely lunch before the departure for the highlight of our day.

At 1:30 we take the bus at our hotel and follow the Loire River for a short trip to discover the Royal Abbey of Fontevraud, a UNESCO World Heritage Site, which, by any reckoning, is one of the most exciting visits of our tour. Our local guide, Zoe, speaks a charmingly-accented English and is a fount of knowledge about all the details of the site. She is wonderfully responsive to questions from the Smithsonian travelers. After explaining the origins of the Abbey at Fountevraud, founded by an itinerate priest named Robert d’Arbrissel in 1099, she notes that one particularity of the abbey is that it was home to both men and women, who were kept in separate residences, as well as separate working and praying areas. But especially notable was the fact that the Abbey was run by a woman, the Abbess, not by an Abbot, as was usually the case in medieval France. The guide leads us into the main church building at Fontevraud where we see the tombstone effigies of four Plantagenet kings and queens, Eleanor of Aquitaine, Henry II Plantagenet, Richard the Lionhearted, and Isabella of Angouleme, the wife of King John Plantagenet (son of Eleanor and Henry II). Zoe jokes that the bars around the tombs are to keep the British tourists from trying to take “their” kings back to England. During the medieval period, the Plantagenets were among the most generous benefactors of the Abbey, and at one point as many as 15 of the Plantagenet sovereigns and their wives were buried at Fontevraud, although only these four sarcophagi remain today.

From the main church building, Zoe leads us to the cloister with its beautiful galleries and into the chapter room of the women’s quarters. On the chapter room walls we see an unusual series of paintings, dating from the 15th century, which depict the crucifixion of Christ, but with interesting and seemingly inappropriate pictures of different abbesses in the bottom corners of each painting. Our guide explains that these striking portraits are a reflection of the extremely wealthy and noble women who ruled over the Abbey, which came to be the most powerful abbey in France before the French Revolution. At that point in time, Zoe tells us, most Abbeys and Monasteries were taken over by the French state, and usually demolished with their stone serving as “quarries” for new buildings in the area. Fontevraud was ironically “saved” from destruction by Napoleon Bonaparte, who converted it into a prison, a function it maintained for more than 150 years through the Napoleonic Empire, several revolutions, and down through France’s current Fifth Republic, which closed the prison in 1963 and began the process of restoration that had resulted in today’s amazing national monument which serves also as a cultural center.

One final mystery remains about the abbey complex at Fontevraud in the form of a very strange-looking building which has many small chimneys protruding from its cone-shaped, stone roof. The building was for a long time referred to as the “kitchen” of the abbey, but archeologists have recently concluded that it was more likely to have been a smokehouse for fish. Otherwise there seems to be no good explanation for why there are so many fireplaces, many more than would have been needed to prepare the meals for the nuns and monks. Our guide challenges us to come up with a better explanation for the building, because in fact no fully satisfactory explanation has been offered. With this mystery to ponder, Zoe leaves us with the thanks of our travelers for such an entertaining and informative visit. 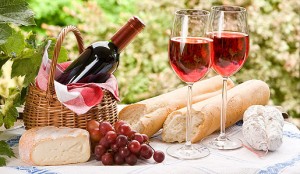 Part of the joy of a journey through France is the food and wine.

After our return to Saumur and some time to relax at the hotel, our Study Leader gives us a lecture about the French Revolution and Napoleon, which intersects nicely with the history we were exposed to earlier in the day at Fontevraud. After a lively discussion period, we walk together across the hotel’s courtyard to a beautiful restaurant that will serve us one of the finest meals we have had on the tour. It is true that, as we walk back to our rooms at the hotel, we are still debating exactly which one has been our best meal on the trip, and will it be possible to top the one we have just enjoyed!

Click here for more on John Sweets and traveleing with him, and here for our tours to France.

What's the most beautiful day you've had while traveling?