Ever wonder how it is on the other side of the Equator? It might be hot in the Southern Hemisphere, but there's snow, ice, and glaciers too in Patagonia, where during a heat wave, temperatures  might reach all of 78 degrees Fahrenheit.

1) The explorer Magellan named the region, which includes the southernmost portions of Chile and Argentina, after the native people there. He used the word Patagón, or giant, to describe the group, who were an average height of about 6 feet tall, much taller than the Europeans of the time.

3) Humans have inhabited Patagonia since 10,000 BCE, if not longer, and traces of past settlements can be found across the region. One of the best known is the Cueva de las Manos (cave of hands), located in Santa Cruz, Argentina. The cave painters used ink made from hematite, and some archaeologists speculate that the young men stenciled their hands on the cave as part of a tribal rite-of-passage ritual. The cave was designated as a UNESCO World Heritage Site in 1999.

4) The Patagonian region of Santa Cruz, in Argentina, is home to a 52-square mile petrified forest. The forest grew 150 million years ago, during the Jurasssic period, and was later buried under volcanic eruptions at the beginning of the Cretaceous Period, when the Andes began formation. 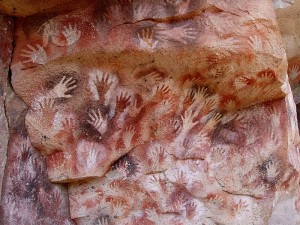 Ushuaia, Argentina, the world's southernmost urban center, is 6,500 miles away from Washington, D.C. What's the farthest you've ever been from home? Please share.