How the Isthmus of Panama Changed the World 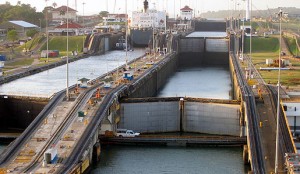 Q. What would happen if the Isthmus was not there? What do you think the world be like today?

A. If the Isthmus of Panama was not there, the world would be very different today. All the animals of South America would be unique marsupials, like in Australia, very different to today because they would never have been invaded and overtaken by all the species that colonized from North America. The Caribbean and the East Pacific would be one ocean with similar species; today they are very different with corals reefs abundant in the Caribbean but without large supplies of commercial fish, whereas the Pacific has few small coral reefs and large important commercial fisheries. Humans from Asia might not have reached South America via the Bering Land Bridge from the north so different kinds of humans might have arrived, say, from Polynesia. Columbus might have sailed on to Asia! The Ice Age would have been different and Europe's ports might freeze every winter like the Saint Laurence seaway does. El Niño and climates in other parts of the world might have been different in ways that we still do not fully understand.

Q. Do you feel that the formation of the Isthmus of Panama has anything to do with causing the El-Niño phenomenon?

A.  The formation of a land barrier between the Atlantic (Caribbean) and the Pacific certainly changed the patterns of ocean circulation in both oceans. It is very likely that this change helped to set up the oceanic conditions in the eastern Pacific which allows the El Niño to develop every few years.

Q. How did the diversion of the Gulf Stream, following the development of the Isthmus of Panama, cause man to begin to walk upright?

A.  Many scientists think that the closure of the Isthmus of Panama strengthened the warm Gulf Stream Current. This current took warm waters high into northern latitudes providing moisture to the atmosphere so that snow formed to build the glaciers of the ice age. At the same time a strong current also flowed south along the eastern side of the Atlantic Ocean and affected the climate of north Africa causing it to become drier so that savannahs and open grasslands developed which provided the habitats that previously arboreal (tree living) primates then colonized. In the process one group became more socially organized, had their front limbs freed up for tool making, caring for young, and for other tasks, and in the process started to walk upright.

A. Yes. Some 50-60% of the mammals of South America, including cats, deer, mice, bears, and many others were not known in South America until about 3 million years ago. Why there are only three species that remain from the migration from south to north is not known certainly. Many scientists think that because the North American animals had already evolved in competition with animals from Asia, which had crossed the Bering Land Bridge during the Ice Age and had then survived within North America, they were in some way "hardened" or more robust when they met and competed with the South American animals which had been isolated on that continent for millions of years and had never faced competition from other regions before. But this is just speculation.

Q. Who first came up with idea of making the canal? About how many miles long is the canal from Panama City to the Caribbean Sea? About how long does it take for a boat to travel all the way through the canal?

A. The idea of a canal across the Central American Isthmus is quite old historically. The Spanish early in their conquest wrote about the possibility, the British surveyed the San Juan River between Costa Rica and Nicaragua and the route over to the Pacific in the early 19th century or late 18th century, and of course the French started to build the canal in Panama in the late 1800s but failed. Their route was successfully taken over by the USA and the canal was completed by 1914.

It is about 65-70 kilometers as the crow flies from Panama City (the Pacific entrance to the canal) to Colón (where the canal reaches the Caribbean). Ships usually allow about 24 hours to complete the crossing of the canal; about half this time is spent navigating the canal and its locks. The remainder is spent at anchor with other ships, waiting to be notified by the Panama Canal Authority that a pilot is ready to take them through. The Panama Canal is the only place in the world where the pilot takes complete control of the vessel and the captain cannot countermand him.

Dr. Coates will be leading the January, 2012 departure of our Around the World by Private Jet tour. Click here for information on travel to Panama and check out the Smithsonian Tropical Research Institute.