Geoffrey Chaucer, author of the Canterbury Tales, is best known for writing his works in vernacular English, rather than French or Latin, the languages used for most literary writing in the 1300s. Book lovers across the English-speaking world have Chaucer to thank for the widespread availability of all manner of literature in our native English. Here are a few things you might not know about Chaucer: 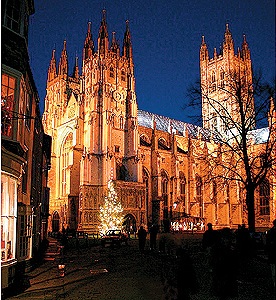 1) Chaucer had at least nine other major works besides the Canterbury Tales, and wrote a number of short poems as well.

2) There's a crater on the far side of the moon named for Chaucer.

3) Chaucer had a part-time government job collecting scrap metal for reuse and also worked as a diplomat.

4) He was a POW during the Hundred Years' War, captured by France and later released after ransom was paid.

Chaucer's most famous work, the Canterbury Tales, is a fictional collection of stories told by pilgrims traveling to the Shrine of Saint Thomas Becket at Canterbury Cathedral. Explore Canterbury for yourself and enjoy the magic of celebrating the holidays the traditional English ways on our Christmas in Canterbury tour.