The Curse of King Tut’s Tomb 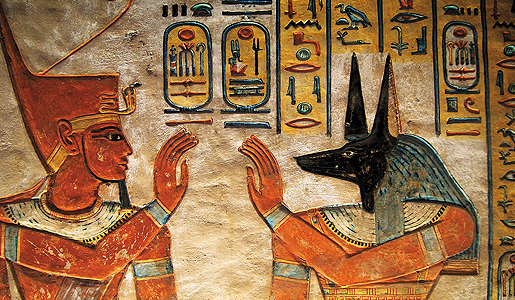 Tomb paintings from the Valley of the Kings

We've all heard the story. The "Curse of the Pharaohs" is a strong belief that anyone who should disturb a mummy or a Pharaoh's tomb will be cursed. This commonly known belief was  intended to preserve the sanctity of these tombs in Egypt's Valley of the Kings, rather than to deter grave robbers. But in the past century, the curse has turned into a grave warning, particularly in the case of King Tut's tomb. Some people choose to believe the curse is alive and well, while others feel it can be simply explained by simple science.

Archeologist and Egyptologist Howard Carter's team was put under the microscope after opening the tomb of King Tutankhamun, as people wondered if the curse had truly affected the people who witnessed the tomb's opening in 1922. Here are a few of the people and pets connected to "the curse."

Who: Howard Carter's pet canary. Cause of Death: Eaten by a cobra. Explanation:  The cobra is symbolic to the Egyptian Monarchy and it is believed that the Royal Cobra was released in Carter's home as a symbol of how the King strikes his enemies. This began local rumors that the curse had been released.

Who: Lord Carnarvon, sponsor of the King Tut dig. Cause of Death: Blood Poisoning. Explanation: Carnarvon was bitten by a mosquito, and accidentally cut the bite while shaving. It then became infected, and he died of blood poisoning. Some believed the mosquito bite was in the same location as a lesion on King Tut's cheek, but since Lord Carnarvon was buried with no formal autopsy, no one could confirm this.

Who: Sir Bruce Ingham, Carter's friend. Material Destruction: House burned down—twice. Explanation: Ingham received paperweight made of mummified hand with its wrist adorned with a scarab bracelet marked with, "Cursed be he who moves my body. To him shall come fire, water and pestilence." No one has an explanation for this other than bad luck.

Carter himself did not believe in the curse, and out of the 58 people present when the sarcophagus was opened, only eight died within twelve years. Carter passed away at the age of 64 of lymphoma in 1939 and was not one of the eight. Scientists note that the tomb may have been filled with a deadly fungus that had grown over the centuries and was released when the tomb was opened.  Air samples were taken from inside an unopened sarcophagus through a drilled hole to test the air quality- and high levels of ammonia, formaldehyde and hydrogen sulfide were all found. However, all of these would have a strong scent and people would have been repelled by the odor.

In the end, it is believed that it wasn't these particular situations that fed the rumor of the curse, but rather the world's newspapers, who found they sold more papers saying that a terrible curse was unleashed the moment King Tut's tomb was opened.

Do you believe in the Pharaoh's Curse on King Tut's tomb?

Interested in learning more about the region? Check out our Antiquities of Jordan tour!