Geysers on Earth… and Other Far Away Places 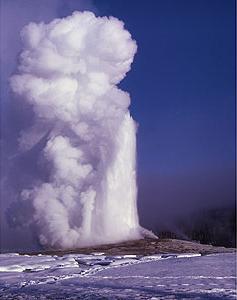 Yellowstone National Park is known around the world for its amazing geysers. Although geysers can also be found in Russia, Chile, New Zealand and Iceland,  Yellowstone is special because it has the largest concentration of geysers on the planet. With between 300-500 active geysers, as well as the renowned Old Faithful, Yellowstone is home to half of the world's geysers. It's a fairly rare phenomenon here on Earth.

But did you know there are geysers in our solar system too?

A geyser is a spring characterized by temporary releases of steam and water, which are ejected turbulently. Geysers on Earth eject water, but on some moons in our outer solar system, geysers release carbon dioxide or nitrogen. Space geysers are also easier to see because of low ambient pressure and  because their eruptions don't include liquid, but rather dust and ice that are carried by the gas.Neptune's moon Triton emits nitrogen from its geysers. When the nitrogen is released, it can eject the material almost 5 miles high and be carried by winds for almost 90 miles. Water vapor jets have also been observed on Saturn's moon, Enceladus. Closer to home are the carbon dioxide geysers near the south polar ice cap of Mars.

But it is nice to know you don't have to go that far to see a geyser. And that's one of the many beautiful things about Old Faithful.

Have you seen geysers in other places besides Yellowstone? Share Below.