Hundreds of polar bears gather on the coast near Churchill, Manitoba, every autumn to await the freezing of the Hudson Bay. When the ice thickens, the bears venture out to hunt Arctic seal and gain sustenance for the long winter ahead. Here are a few things you might not know about ursus maritimus... 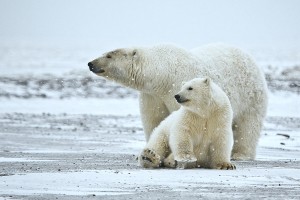 — The oldest known polar bear fossil was a jawbone found on the Arctic  archipelago of Svalbard in 2004, and is estimated to be more than 110,000 years old.

— Polars bears are the largest land carnivores on earth—adult males can weigh up to 1500 lbs. and measure as long as 9.8 feet. Male lions, by contrast, top out at about 550 lbs and eight feet.

— A polar bear's water-repellant outer coat is made of transparent, not white, hair. This outer hair is shed every summer. Polar bears still have to be careful in warmer weather, though—they can overheat if temperatures top 50°F.

— Polar bears live on the edge of the Arctic Sea's ice packs, where they hunt for seals. The increase of global temperatures since the 1800s limits the amount of sea ice available for polar bear habitat, and increased melting also reduces the amount of time each year they have to hunt. For this reason, polar bears were listed as "threatened" under the Endangered Species Act in 2008.

— If you want to help preserve Polar bear habitat, click here for some good advice from the folks at the Smithsonian Museum of Natural History  about what we can all do to help with ocean conservation.

What animal do you want to help? Please share.

Each year, we bring travelers to snowy Churchill to observe these fascinating creatures up close. Space is still available on our October 2010 departure.