What You Need to Know About Machu Picchu 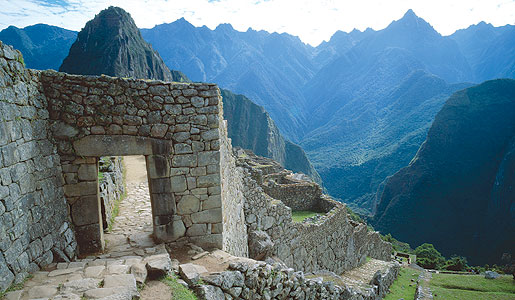 Nobody wants to stand at a nice reception when an acquaintance announces she just got back from the absolutely fabulous Machu Picchu and have no idea what the fuss is all about. To make sure that never happens to you, here are the basics about Peru's Machu Picchu so you can be as smart and cultured as the next guy.

1.) Machu Picchu is Quechua for "Big Mountain." The Quechua are the indigenous people of Peru, and the archaoelogical site of Machu Picchu is located south of the equator in the Andes Mountains and outside the city of Cuzco. But the location of the ruins is truly amazing as it sits in between the Machu Picchu and Huayna Picchu mountains, making it difficult to approach and easily defensible in an attack.

2.) The city was built in 1450 at the height of the Incan Empire. By 1572, the city was abandoned, but there is some confusion as to why. It doesn't appear that the Spanish conquistadors defaced or damaged any part of Machu Picchu, so it is thought that smallpox, which the Spanish brought from Europe, may have been a major factor in the fall of the city.

3.) The buildings located at the site were very well built using a technique called ashlar. This involved cutting blocks of stone and stacking them without the use of mortar. The result is a long-lasting, earthquake-proof structure.

4.) Popular culture has cited Hiram Bingham as the person who "discovered" Machu Picchu in 1911. However, there is some evidence that he wasn't the first non-Native to stumble upon the site. Simone Waisbard, a longtime researcher in Cuzco, believes three men named Enrique Palma, Gabino Sánchez, and Agustín Lizárragal left their identities inscribed on a rock at the site on July 14, 1901. Others believe a German businessman named Augusto Berns looted the site - a common practice at the time—in 1867. Physical evidence has shown Machu Picchu to be listed on maps as early as 1874. While Bingham gets the most credit today, there may have been other visitors prior to his notable arrival in 1911.

5.) In 1983, Machu Picchu was designated an UNESCO World Heritage Site and was described as "an absolute masterpiece of architecture and a unique testimony to the Inca civilization."

With these little tidbits in your back pocket, you can be the hit at the party too—or at least answer that Final Jeopardy question and impress your friends.

Want to go? Click here to see our Peru tours.