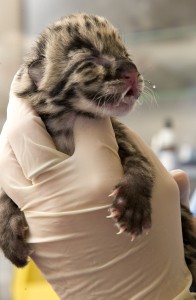 The National Zoo is proud to announce the birth of not one, but two adorable baby boy clouded leopards born to Mom Jao Chu and Dad Hannibal! The babies were born at the Zoo's conservation campus in Front Royal, VA, 16 minutes apart on Valentine's Day. Each weighed little more than a half pound at birth. They join siblings Sa Ming(“brave warrior”) and Ta Moon (“mischievous child”).

Their parents, Jao Chu and Hannibal, are native to Thailand, but due to deforestation in the region their species was listed as "vulnerable to extinction."  The family is currently hoping to upgrade their home due to their growing family. The facility they currently reside in was built in 1911, so the National Zoo has launched a campaign to raise $2 million for a new facility. The updated habitats for each breeding pair will include a climate-controlled and quiet indoor area attached to two 20-foot-tall climbing towers to simulate their natural forest environment. The current facility has done an outstanding job with 76 clouded leopard cubs being born in Front Royal since 1978.

You can visit family friends Tai and Mook on the Asia Trail at the National Zoo and learn more about clouded leopards from the Smithsonian Channel's Ghost Cat: Saving the Clouded Leopard.

Vist the homeland of the clouded leopard in Thailand! Book by February 28th and save $500 on our Treasures of Angkor Wat and Vietnam tour.

What is your favorite baby animal? Monkeys? Pandas? Seal pups?