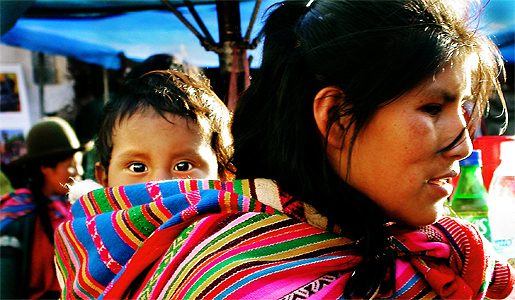 Joan Gero: Spanish is spoken as the dominant language today, imposed by the Conquistadors in the 16th century. Two centuries earlier, the Inca had imposed an imperial language (Quechua) of their own, replacing the multitude of local languages spoken by local indigenous groups. Today, some six million Quechua speakers remain (in Peru, Ecuador, Bolivia and Argentina combined).  Meanwhile, the southern native Andean language of Aymara is also alive and well, still spoken by an estimated three million people in Bolivia and Peru, so visitors will most likely hear Aymara in their travels as well.

Q. How did the Andeans come to develop such artistry—in colors, in design—in textiles?

A. Artistry INDEED! The fabulous Andean textiles are truly a treasure to behold. Possibly some designs evolved from earlier pyro-engraved decorations on gourds and calabashes, as well as adopting knotting techniques from producing fishing nets, twined baskets and reed mats, all of which we have recovered from very early sites on the north coast of Peru. But the textiles themselves also go far back in time and include an enormous diversity of techniques including double weaves, discontinuous warp weaves, embroidery and painting on textiles, laces and gauzes.  Colors were originally all derived from plant and animal products: onion skins make a lovely yellow, carbon produces a deep black, guano makes things white, and the red that comes from the cochineal bug is world-renown.

Q. The cuisine in Lima is cosmopolitan, influenced by its European (Spanish, Italian, German), Andean, and Asian (primarily Chinese) populations. How would you describe the cuisine in Cuzco? And are there really potato desserts?

A. Ah, sigh. Cuzco cooking is the real Andean experience, exotic but never straying far from comfort food with lots of satisfying carbohydrates: corn, rice and of course the indigenous potato! Generally there are delicious soups of rich broths and chunks of meat and roundels of corn to start a meal, followed by plates of carbs with delicious, delicate vegetable sauces, which the diner can make as spicy as they wish by adding in hot sauce. In the states, we have adopted two Andean-derived foods in our own diets: meat jerky (from the Quechua word "charqui") and "corn nuts" as toasted corn kernels. Cuzco street foods are equally tempting, including roasted beef hearts and pork chitterlings, but also melons with spices on them and roasted corn on the cob. Expect simple, healthy, light and fresh home-made foods!

Have you been to Peru? What did you think of the food? Share below.