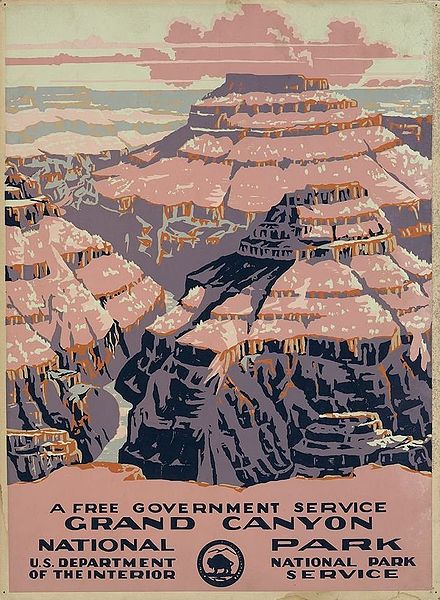 A 1938 poster depicting the Grand Canyon. Image: Library of Congress.

The Grand Canyon National Park boasts stunning vistas that even the best photographs can’t adequately capture. About the size of Delaware, but located in Arizona, the park is big enough to contain exposed rock that as old as two billion years and has enough diverse microclimates that people can be hiking through snowdrifts and sunbathing on the river bank on the same day.

John Wesley Powell is credited with leading the first passage through the Grand Canyon in 1869 on the Powell Geographic Expedition. Powell, a U.S. soldier and trained geologist, explored the Colorado River and the surrounding areas, gathering information and providing recommendations to developers back east. The extremely rugged and remote landscape of the area prevented major agricultural development, but made it a top-notch destination for intrepid outdoor explorers and athletes. Even so, only 3.3 percent of the terrain has been surveyed by archeologists, who continue to look for more evidence from groups who once inhabited the area. Carbon dating indicates that some artifacts found there date from as far back as 2900 B.C. It is thought that people have lived in the area for at least 8,000 years.

The Havasupai, who are native to the area, continue to live there in Supai village and the surrounding lands; their rock art decorates the nearby cliffs. Today, the park hosts more than four million tourists each year, who walk the trails, climb the cliffs, photograph the scenery, row the river, explore by helicopter, and revel in the grandeur of the Canyon.

Take your family to the Grand Canyon this summer. Join us in June 2010 for an exploration of the park.