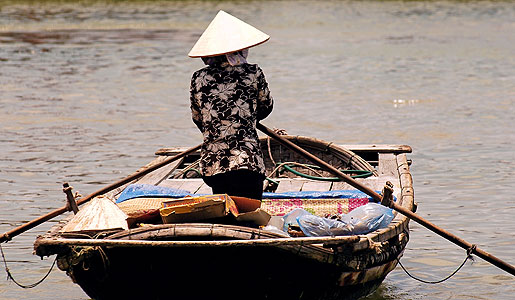 Smithsonian Journeys: You lived in Hanoi for two years. What would you especially highlight on our itinerary and what impressions would you hope our travelers will take home with them?

Dana Sachs: One of the things that surprises visitors most when they visit Vietnam is the diversity of the country. The northern Red River Delta region around Hanoi has four seasons, so people on our January and February trips enjoy crisp days and nights when they’ll want to carry a jacket. In Hanoi at this time of year, we get to see people bundled in sweaters and hats, eating dried fruit candies and relaxing together in little street-side cafes with cups of strong coffee. In Vietnam’s central region, the days are cool and misty, perfect for bike rides through the quiet cities of Hue and Hoi An, where people maintain the traditions of fishing and making handicrafts that have been passed down for centuries. In Saigon, the country’s thriving metropolis, the weather is hot but pleasant, just the right temperature to finish up a walk through a teeming market with a cool glass of sugar cane juice or plate of fresh pineapple.

Each of these regions has its own particular highlights. I tell people that they can’t leave Hanoi without taking a walking tour through the Old Quarter, a warren of tiny lanes and back alleys named for the things that have been sold there for centuries (Sweet Street, Silver Street, Prayer Paper Street—the list goes on and on). In the Central Region, I always love to wander through the ruins of the Imperial Purple Forbidden City (also known as the Citadel), and to travel outside of town to visit the overgrown and romantic gardens surrounding the tombs of the kings. In the South, I recommend kicking back on a boat that takes you down the canals and streams of the Mekong Delta. Right from the deck, you can witness the life of a vibrant river culture, with people washing their hair on the banks, or fishing from hand-crafted canoes, or trading in the floating markets that stretch across the river near Can Tho every morning.

One of the great highlights for me, as well, is the fact that visiting this year coincides with Hanoi’s celebration of its 1000th anniversary. It’s a year-long party, and I’m excited about being there for it.

SJ: The Thien Mu Pagoda (Hue) has existed since the early 17th century and is famous throughout Vietnam. What is the story of the pagoda?

DS: Thien Mu, with its beautiful seven-story tower, has become one of the enduring symbols of Hue. That’s appropriate, because the pagoda, like the city itself, is a thing of great beauty that shows the scars of intense suffering. First built in the early 17th Century, it has for hundreds of years served as a center of spiritual retreat for Buddhist monks. In 1963, the pagoda became famous for a different reason. It was the height of the war and the monks had become increasingly frustrated by the treatment of Buddhists by South Vietnamese President Ngo Dinh Diem, who was a Catholic. One monk from the pagoda, Thich Quang Duc, immolated himself on the streets of Saigon, and the photograph of his burning body, seated in lotus position, became one of the most horrifying images of the war. These days, the automobile that carried Thich Quang Duc to Saigon remains parked on the grounds of the pagoda, and the site has become a place of pilgrimage for those who remember those terrible times.

SJ: From what I have read, the Perfume River deserves its name. It seems that beyond, or perhaps thanks to, its aromatic and languid waters, the river is almost a state of mind. Can you tell us more?

DS: This question reminds me of one more thing about the Thien Mu Pagoda. When we visited on my most recent trip with Smithsonian Journeys, we travelled there by boat along the river. The boat brought us to the banks below the pagoda and we walked up to visit. From this hillside, you could look out over the river moving slowly past. Like so much of Hue, the scene was quiet and absolutely peaceful. Only a few brightly colored fishing boats slipped by in the current. It made perfect sense to me that, all those centuries ago, a Nguyen Lord decided to locate a pagoda here. For me, then, the “perfume” of the river becomes intimately connected with the fragrance of the incense burning at the altars throughout the pagoda. It’s a lovely scent that, in my mind, seems inextricably linked with the serenity of the pagoda and the quiet of the river.

SJ: Perhaps at no other point in the itinerary will our travelers come as close to the reality of the Vietnam War than in Ho Chi Minh City (Saigon). One focus of your academic work is Operation Babylift (from Saigon) and its consequences. Please tell us about it.

DS: Looking back, it seems hard to believe that such a thing happened. It was early April of 1975. The North Vietnamese-backed troops were closing in on Saigon and everyone knew that the collapse of South Vietnam was only weeks away. In the midst of this chaos, the U.S. government embarked on a mission to evacuate some 3,000 children and put them in adoptive homes overseas. Most of these children were already living in orphanages run by foreign-aid groups. A significant number, however, were relinquished in the final weeks of war by panicked Vietnamese parents who worried that their children would be killed by the Communists if they remained in Vietnam. After the war ended, it became clear that those children would have survived. By then, however, they had already been placed with new families overseas. The program had taken the children out of the country, but there was no system in place to repatriate them.

My research included interviewing numerous people who were involved in the Babylift, including the foreign aid workers who had taken charge of these kids, local women who cared for them in the orphanages, medical staff, U.S. government officials, adoptive parents, biological parents and, of course, the children themselves. The book comes out in April 2010, on the 35th anniversary of the end of the war. Its title, The Life we were Given: Operation Babylift, International Adoption, and the Children of War in Vietnam, comes from a comment I heard from one of the now-adult adoptees. I had asked him if he harbored any anger over what had happened to him. He told me that he didn’t see a point to feeling angry. “This,” he told me, “is the life we were given.”

SJ: Hanoi finally became "Hanoi" in the 19th century, although it has been a capital or center since the 3rd century BC, and many of the historic sites our travelers will see there date to the pivotal 11th century. Please shed light on what our travelers can look forward to discovering in this historically significant city.

DS: As I mentioned, Hanoi is about to celebrate it’s 1000th anniversary. Like Rome or Athens, it is a city that has existed as an important political, economic, and cultural center for centuries. When you walk down a street in Hanoi, you are literally walking over the remains of the past. Several years ago, while the government was making preparations to build a new parliament building, crews started excavating a piece of land in the center of the city. Not far below the surface, they began unearthing an enormous cache of artifacts. The discovery included, literally, millions of clues to Vietnam’s history: 600-year-old bricks, 15th Century blue and white bowls from the Le Dynasty, celadon platters, even the bones of elephants, which were used for labor in early Vietnam. The discovery marked the site of the royal enclosure of the Thang Long Citadel, the seat of power during the period when Hanoi was known as Thang Long. Scholars had always suspected that it existed but it wasn’t until this modern age, when they were making preparations for a monument to the current government, that they finally found incontrovertible evidence of its existence.

SJ: So many Vietnamese place names are dragon-based, e.g., Ha Long (Descending Dragon) Bay—how did the dragon become the starring figure in Vietnamese mythology and folklore?

DS: Vietnamese culture includes four sacred animals: The phoenix, the unicorn, the tortoise and the dragon. The dragon is the most powerful and, in many ways, stands for the strength of the nation. It’s not surprising, then, that many important Vietnamese names refer to the dragon. The Vietnamese name for the river we call the Mekong is Cuu Long, which means Nine Dragons. For many centuries, Hanoi was called Thang Long, which means Rising Dragon, an image that evokes power within the culture. The famous natural wonder, Ha Long Bay, is named for the “descending dragon” which legend says dove in and out of the water, creating islands as it churned the sea. As we travel through the country, we see these figures again and again. Stone stele of the tortoise, which represents longevity and wisdom, line the pavilions of Hanoi’s Temple of Literature, the ancient seat of learning. Statues of unicorns and phoenixes decorate pagodas and temples from the north to the south. But these images aren’t simply archaic. In Hanoi, a backpackers guesthouse carries a familiar name. It’s called the Rising Dragon Hotel. A charity race in Saigon: Challenge of the Nine Dragons. If you want a clearer idea of the importance of the dragon as a symbol in Vietnam, consider the importance of a flying creature in our own national identity—the Bald Eagle.

What do you want to see in Vietnam? Share below.

See Vietnam for yourself on one of our tours to the country.