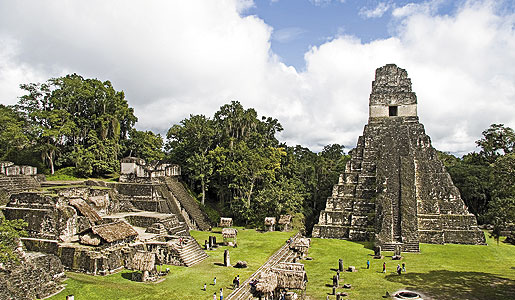 Smithsonian Journeys: What sparked your interest and subsequent career in Mesoamerican and Maya archaeology?

Tom Garrison: I had always been attracted to archaeology since I was a kid. I grew up in a house that was built in 1720 and would always find old nails and pieces of horse hair plaster in my mother's garden. After taking a couple of college classes I was pretty hooked on archaeology, but it was my six months studying abroad in Mexico and Belize that made me choose Mesoamerican archaeology as a career. I was overwhelmed by the mysteries of all those ruins and I remember thinking on my plane flight home, "I have to get back down there, SOON!"

SJ:  Mile high Panajachel (Gringotenango) sits on the shore of volcanic Lake Atitlan, known as the deepest lake in Central America and one of the most beautiful in the entire world. How did this area escape settlement until the middle of the Post Classical Maya era (c.1300 CE)?

TG: This is an interesting question given results that were just presented at Guatemala's annual Simposio de Investigaciones Arqueologicos (in which I participated) in July. Recent underwater archaeology at the lake suggests that there actually is a much earlier presence in this area, but that changes in lake levels have obscured the previously undetected settlement. I think that we will see some very exciting archaeology coming out of Panajachel and Lake Atitlan in the very near future.

SJ:   We hear about the extensive area covered by monumental stone pyramids and other structures as well as plazas and causeways, including palaces. Where did ordinary people live? In extended “suburbs”? Or in discontinuous villages or on farms? And of what were their dwellings constructed?

TG:These "rural" areas are actually the focus of my current research. I spend my time tromping around the jungle in the areas between major sites. What we find would be almost unrecognizable to the untrained eye. A very low bump on the forest floor, when excavated, reveals itself to be a crudely made platform that would have supported a pole and thatch or wattle and daub perishable structure. Nearby there is usually one or two other platform remains, as well as a small quarry where construction material was excavated and one or two bedrock cisterns (chultunes) that may have held water or stored dry food. The impression that one gets is that of scattered family farmsteads.

SJ: We know that directional orientation of temples and observatories was key to their layout and arrangement. And we know that the earliest evidence of human occupation in Mesoamerica dates to about 10,000 BCE. Can archaeologists estimate when in their development people would begin to somehow record celestial observations and how long it took them to acquire enough observations to utilize these findings in their architectural creations?

TG:These sorts of cognitive developments are very difficult to trace archaeologically. In Mesoamerica the yearly cycles of the sun and stars would have become intimately linked once humans began living in Archaic agricultural villages following the domestication of maize, beans, and squash (6000-5000 BCE). In the Early Formative Period (2000-1200 BCE) we begin to see remains of a shared ideology, usually in the form of crude figurines found at sites like Tlatilco in central Mexico. The astrological and agricultural cycles were probably woven into this ideology at an early stage, so that by the time the Olmec arrive (ca. 1200 BCE) they are already orienting their public architecture and plazas based on celestial observations.

SJ:  What are the principle differences our Smithsonian travelers should look for from Pre-Classical to Classical to Post-Classical Maya sites?

TG:
Most of what we will get to see on our tour that will immediately stand out are the changes in architecture. Preclassic structures, such as the Mundo Perdido (Lost World) complex at Tikal,  are massive, with large bases and large stones. This is also a time period when the Maya placed large masks on architectural facades (some of which are exposed at Tikal) representing gods and rulers. Classic Period sites, like Yaxha and most of Tikal, are what people think of when they think "Maya" (which is why they are Classic!). You have soaring pyramids with multi-chambered vaulted temples on top. There are sprawling elite palaces as well. The Classic Period is also the time when the Maya erected stelae and made the most public presentations of their hieroglyphic writing system. The Postclassic presence in the Maya lowlands is minimal and we will be fortunate to see Topoxte, which was one of the largest sites, along with Tayasal (modern day Flores). There is a general decline in quality and monumentality of architecture. In the highlands, where there was a thriving Postclassic population, sites were chosen in areas that were naturally defensible. Mesoamerica was an extremely bellicose region from about 850 CE up until the Spanish Conquest of Mexico in 1521.

Intrigued by Mesoamerican culture? Join us in Guatemala  in 2010.

Which ancient civilization do you find most interesting? Share below.