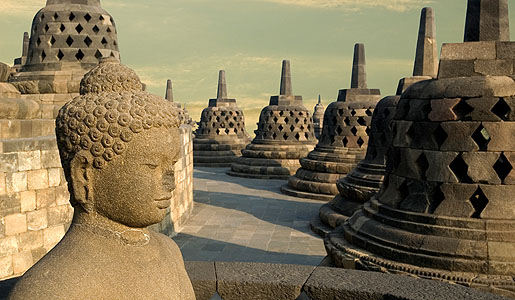 Borobudur, named a UNESCO World Heritage Site in 1991, is a Buddhist monument dating back to the 9th century. Located in Magelang, Central Java in Indonesia, the monument is decorated with 2,672 bas relief panels and 504 Buddhist statues. Borobudur serves as both a shrine and a pilgrimage site.

On the top level of the monument there is a main dome surrounded by 72 Buddha statues seated inside perforated stupa. Although most visitors are surprised to see the large empty stupa found on the top level, the emptiness represents the world of formlessness, the state of nirvana which Buddhists view as their desired spiritual state.

Borobudur is believed to have been abandoned in the 14th century after the decline of the Buddhist and Hindu kingdoms in the Java region. In 1814, Sir Thomas Stamford Raffles rediscovered the site, and between 1975 and 1982 the site was extensively restored with the help of UNESCO and the Indonesian government. Borobudur is revered for its artistic and engineering beauty as well as its Buddhist symbolism and spiritual importance. Today, it is considered a “must-see” destination by seasoned travelers worldwide.

Explore Borobudur for yourself on an exotic journey to Indonesia.

What do you consider a must-see World Heritage Site? Share with us below.