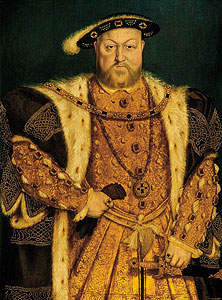 Few monarchs have aroused as much curiosity and interest as Henry VIII (1491-1547) of England's Tudor dynasty. A larger than life historical figure, Henry VIII famously married six times in order to secure an heir. He is also responsible for breaking with the Roman Catholic Church to establish the Church of England and declared himself the Supreme Head of the Church of England.

Ruling from 1485 to 1603, the Tudor dynasty included some of England's most fascinating monarchs. Five centuries later, the lives of Henry VIII and his wives, his daughters Elizabeth I and Mary I, and other famous Tudors still captivate the imagination.

Can't get enough of the Tudors? Join us for a special tour to England as we explore the lives, secrets, and passions of the Tudor dynasty. Click here for details.

Who is your favorite Tudor figure? Share with us below.