Petra: A Journey Back in Time

I am always curious to know what piques our travelers' interests, so whenever I staff a tour, I make sure to ask what brings people to a particular tour during our opening reception. During a recent voyage covering Jordan and Egypt, as we stood holding our wineglasses aloft and basking in the lovely breeze off the Dead Sea, I was expecting a variety of answers—after all, this two-week tour promised many unique experiences. This time, however, the answer was simple. One word—“Petra”—was nearly unanimous.

Petra sits along several ancient commercial routes—to Gaza in the west, Damascus in the north, south to Aqaba on the Red Sea, and east across the desert to the Persian Gulf. As we made our way down towards the Siq, we came upon a small shop, stopping to hold frankincense and myrrh in our hands. Our guide Raad helped us to grasp the full significance of these commodities, explaining the true difficulties of transporting them by caravan, resulting in their phenomenal expense.

In Egypt, we later learned about Hatshepsut’s journey to Punt (exact location still disputed), and how archeologists believe she cultivated her own frankincense and myrrh trees after this trading voyage. Back in Petra, we started to make our way down the deep slice in the sandstone called the Siq to discover the first of the caves and aqueducts.

There was plenty to see even before we arrived at the so-called Treasury (which is not actually a treasury, but a tomb), which gave us many opportunities to stop, ask questions, and marvel about how the Nabateans were able to develop the technology to harness and preserve their scarce, often unpredictable water supply. Through a system of cisterns, dams, and aqueducts, they were able to save water for times of drought and minimize the impacts of surprise floods. Today, you can still see their water distribution system, trailing right down the Siq into the central area by the Treasury at the bottom. Many of the caves, altars, and other mysterious structures fed by this system are also still there— indelibly rendered in desert stone. 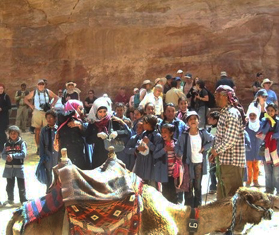 That day, there was a party atmosphere at the end of the Siq, where a number of school groups, camel hawkers, and assorted other people had gathered to soak up the sun and marvel at the sight of Al Khazneh, as the locals call the Treasury. We imagined ourselves as the masons of Al Khazneh, carving into the mountain directly, starting at the top. We got dizzy just thinking about the workers who climbed up the cliff and carved footholds for themselves on the way down, only then creating the myriad decorations, figures, and pillars that adorn the fascia. Inside, the Treasury looks a bit bereft—with only a few empty alcoves once used as tombs.

The Nabateans used Petra as their capital until about 100 BCE. After that the city flourished for a while under Roman rule, but eventually declined as trade routes moved elsewhere. Petra was “discovered” by Swiss explorer Johann Ludwig Burckhardt in 1812. Of course, the local Bedouins had always known of its existence. Hoping to find the source of the Niger River, Burckhardt had studied Arabic and the Koran extensively, eventually taking the name Sheikh Ibrahim Ibn Abdallah and passing through the Levant as a Muslim. By disguising himself as a Bedouin, he was able to get the locals to show him the site, which was buried under many feet of rock, sand, and gravel. In fact, digging continues today as there is still more to find beneath what has already been uncovered. In 1812, some of the Treasury was visible and Burckhardt came upon it through the Siq, much as we did almost 200 years later.

As we walked down the narrow gorge, taking in the reds, browns, and oranges of the rocks above us, we tried to put ourselves in Burckhardt’s shoes. We imagined the thrill of discovery and the triumph of finding something so magical, so elusive, so life-changing. As the Treasury rose pinkish in the morning light ahead of us, our imaginations were replaced by reality, as the Treasury at Petra, the reason so many had chosen the tour, greeted us.

See Petra for yourself on one of these tours.

Why did you go on your last trip? Share below.