Our arrival at Tokyo's Meiji Shrine is the first time our group members have to take off their shoes, but if there's any (minor) grumbling, it soon turns to hushed awe as a white-robed Shinto priest ushers us into the inner hall. Careful not to point our feet at the altar, we sit in an orderly row on the tatami, whose fresh aroma wafts through the room, bringing the beauty of nature indoors. 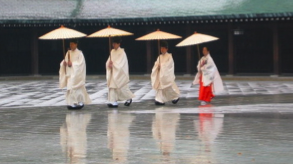 The boom of a taiko drum inaugurates this spectacle, but since this is Japan the spectacle is very subtle. Haunting music of kagura court dance, played on pipes unknown to the western world, accompanies singers chanting timeless melodies of the imperial court. A priest reads an incantation of blessing, followed by dancing shrine maidens gliding across the stage in flowing robes of orange and white, their headdresses and outstretched hands adorned with seasonal greenery. We show our appreciation with the traditional Shinto salute—two bows, two claps, and a bow. Another blast of the taiko closes the ceremony, and we are each invited to partake in the offering of a sip of sake from saucers the color and feel of alabaster.

By the time we put on our shoes to head back outside, each of us has been transformed in ways we did not anticipate, and everybody seems to walk a little taller through the shrine's forest, to rejoin the world's largest metropolis.