« Photo: Hoffman at the Met
Best. Video. Ever. Costa Rica! » 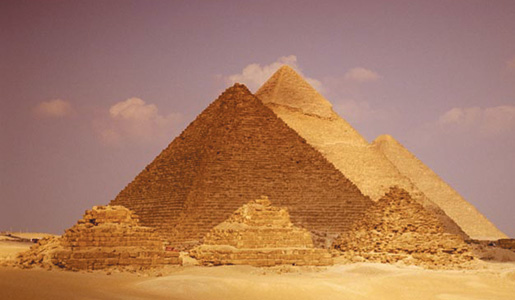 The Necropolis is one of the most frequently visited locations in Egypt, encompassing the enigmatic Giza Pyramids and the massive Great Sphinx. While long recognized as ancient masterpieces, today people remain intrigued by the mystery surrounding the engineering, construction, and intended purposes of these structures.The Necropolis was declared a UNESCO World Heritage Site in 1979, but long before 1979, in Hellenistic times, Greek tourists listed its Great Pyramid of Giza as one of the Seven Wonders of the World. The Necropolis is the only one of these Seven Wonders still in existence.

One of the most unique aspects of the Great Pyramid of Giza is the precision of measurement involved in its construction. The base forms a nearly perfect square and is almost exactly level. When first completed, this pyramid stood nearly 50 stories high (481.4 ft.) and consisted of 2.3 million blocks with an average weight of 2.5 metric tons per block. Today, it still dominates the desert landscape despite the effects of age and erosion.

Similarly mysterious are the methods by which the ancient Egyptians built these colossal structures. Scholars consider two major theories that might describe how the Great Pyramids were constructed. One theory purports that the stone was taken from a quarry and transported to the pyramid site. Another theory suggests the blocks were manufactured on site from a type of “liquid limestone,”–more like concrete. Both theories agree on the necessity for a large workforce; it is believed that as many as 35,000 men and women were involved in the pyramids’ construction.

The pyramids’ significance is similarly unknown. The Great Pyramid has multiple inner passageways and chambers which might have been royal tombs. In addition, scholars believe the structures may have held astrological significance because the sides of all three of the Giza pyramids were astronomically oriented to north-south and east-west within a small fraction of a degree.

Memphis, its Necropolis, and the Pyramid fields from Giza to Dahshur have been attracting travelers since Hellenistic times. Because of the immense size and durability of these structures, tourists can visit today and draw their own conclusions about the construction, use, and decline of the ancient Egyptian pyramids.

How do you think the pyramids were used? Share below.

Click here for information on visiting Egypt with Smithsonian Journeys.